Love Marriage and Arranged Marriage: from Business to Affection 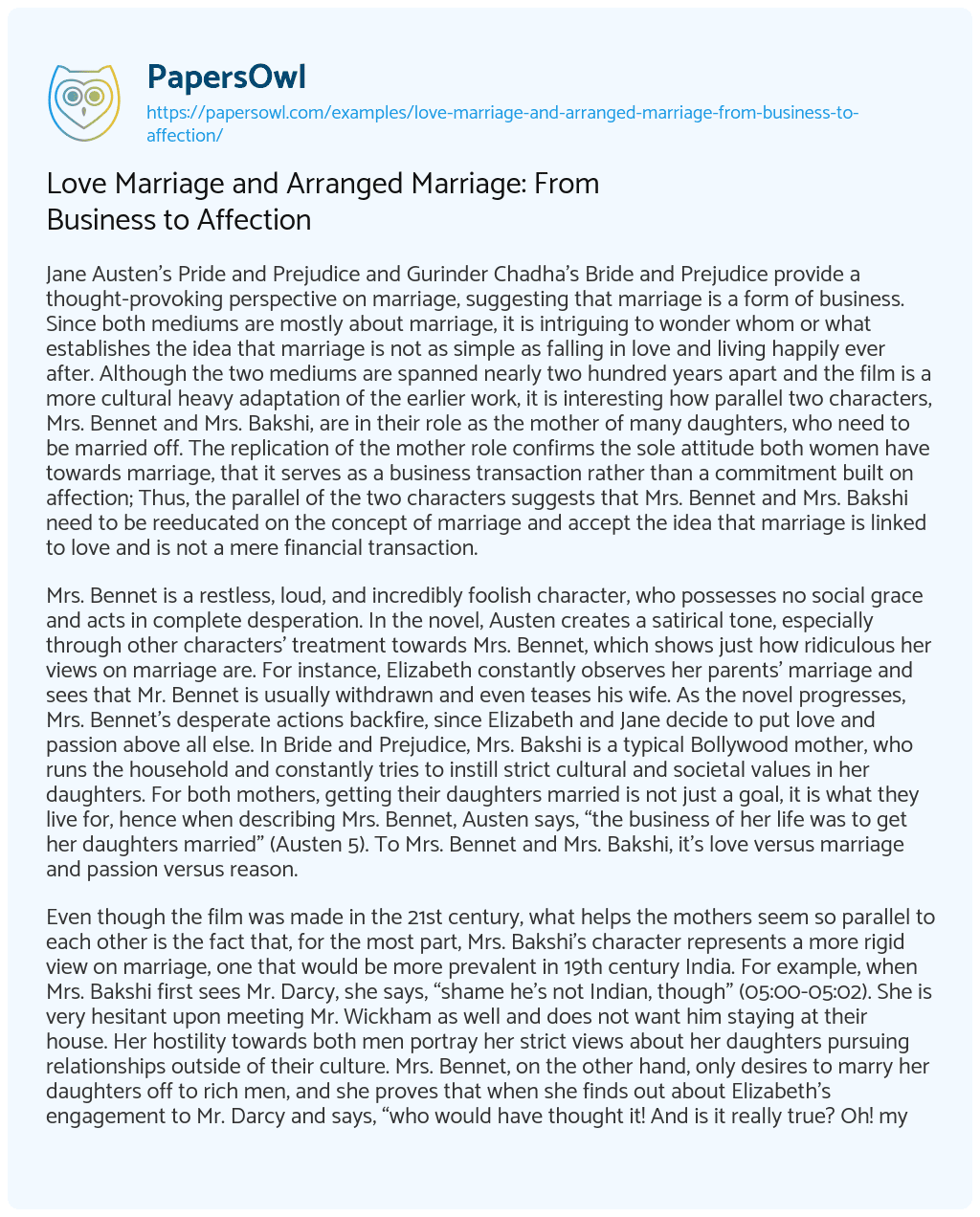 Jane Austen’s Pride and Prejudice and Gurinder Chadha’s Bride and Prejudice provide a thought-provoking perspective on marriage, suggesting that marriage is a form of business. Since both mediums are mostly about marriage, it is intriguing to wonder whom or what establishes the idea that marriage is not as simple as falling in love and living happily ever after. Although the two mediums are spanned nearly two hundred years apart and the film is a more cultural heavy adaptation of the earlier work, it is interesting how parallel two characters, Mrs. Bennet and Mrs. Bakshi, are in their role as the mother of many daughters, who need to be married off. The replication of the mother role confirms the sole attitude both women have towards marriage, that it serves as a business transaction rather than a commitment built on affection; Thus, the parallel of the two characters suggests that Mrs. Bennet and Mrs. Bakshi need to be reeducated on the concept of marriage and accept the idea that marriage is linked to love and is not a mere financial transaction.

Mrs. Bennet is a restless, loud, and incredibly foolish character, who possesses no social grace and acts in complete desperation. In the novel, Austen creates a satirical tone, especially through other characters’ treatment towards Mrs. Bennet, which shows just how ridiculous her views on marriage are. For instance, Elizabeth constantly observes her parents’ marriage and sees that Mr. Bennet is usually withdrawn and even teases his wife. As the novel progresses, Mrs. Bennet’s desperate actions backfire, since Elizabeth and Jane decide to put love and passion above all else. In Bride and Prejudice, Mrs. Bakshi is a typical Bollywood mother, who runs the household and constantly tries to instill strict cultural and societal values in her daughters. For both mothers, getting their daughters married is not just a goal, it is what they live for, hence when describing Mrs. Bennet, Austen says, “the business of her life was to get her daughters married” (Austen 5). To Mrs. Bennet and Mrs. Bakshi, it’s love versus marriage and passion versus reason.

Even though the film was made in the 21st century, what helps the mothers seem so parallel to each other is the fact that, for the most part, Mrs. Bakshi’s character represents a more rigid view on marriage, one that would be more prevalent in 19th century India. For example, when Mrs. Bakshi first sees Mr. Darcy, she says, “shame he’s not Indian, though” (05:00-05:02). She is very hesitant upon meeting Mr. Wickham as well and does not want him staying at their house. Her hostility towards both men portray her strict views about her daughters pursuing relationships outside of their culture. Mrs. Bennet, on the other hand, only desires to marry her daughters off to rich men, and she proves that when she finds out about Elizabeth’s engagement to Mr. Darcy and says, “who would have thought it! And is it really true? Oh! my sweetest Lizzy! How rich and how great you will be! What pin-money, what jewels, what carriages you will have! Jane’s nothing to it – nothing at all,” (Austen 259). Mrs. Bennet equates Elizabeth becoming richer to becoming a better daughter. Mrs. Bennet now being thrilled with Elizabeth shows that she cares none about Elizabeth’s true feelings. The fact that Lizzy will be rich proves that her mother sees her marriage as a business transaction gone incredibly well.

Mrs. Bakshi’s body language provides some insight to not only how her character reacts in the film, but simultaneously depicts how Mrs. Bennet’s body language possibly would have been when trying to match her daughters with potential suitors. For instance, Mrs. Bakshi elbows her husband in order to gesture that he must give Mr. Balraj permission to dance with Jaya, and she slaps her hand to her forehead upon Mr. Wickham’s arrival at their house and Lalita’s rejection of Mr. Kholi’s proposal (12:12, 47:28, 62:15). Mrs. Bakshi’s acts of affection towards Jaya also shows how badly she wants to keep marriage within the Indian culture. After the wedding celebration where Jaya was danced with twice, Mrs. Bakshi is so delighted with Jaya and talks about how she wouldn’t mind if Jaya got married and moved away, so long as it is with Mr. Balraj (13:05-13:10). Later, towards the end of the movie, body language shifts. Mrs. Bakshi’s becomes concerned with Jaya’s body language after Jaya having not heard from Mr. Balraj. This indicates a shift in Mrs. Bakshi’s attitude, as she now urges Jaya to meet one of Kholi’s friends in California who is a plastic surgeon (88:04-88:07). The scenes show Mrs. Bakshi’s progression from wanting to keep marriage within the Indian culture, to not caring as much, and wanting to marry Jaya off to a wealthy plastic surgeon, cueing the transactional nature of marriage. Mrs. Bakshi’s shift in attitude now proves only one thing to hold importance to her when finding a man for her daughter: money.

Another maternal figure seen by readers of Austen’s Pride and Prejudice is Mr. Darcy’s aunt, Lady Catherine de Bourgh, who has an arrangement made up in her mind for Mr. Darcy to end up with her daughter, Anne. In Bride and Prejudice, Lalita is caught off guard when she is introduced to Mr. Darcy’s supposed girlfriend by his mother, Catherine. While reading the book, one doesn’t necessarily think of the arranged marriage concept. Arranged marriage is not really a thought because Jane and Elizabeth are basing their relationship off of true connections. Even Lydia and Charlotte make their own decisions regarding their relationships, nobody had to make those decisions for them. However, arranged marriage is shown more in the film adaptation of Austen’s work, especially when Mrs. Bakshi goes on the Indian matchmaker website (67:04-68:06). Lalita views matchmaking as more of a global dating service. This shows that since Lalita is willing to accept her mother’s views on matchmaking, Mrs. Bakshi should understand the value of marriage, even if it involves someone who is outside of the culture or who is not very wealthy. Including Lady Catherine de Bourgh’s parallel as Mr. Darcy’s mother rather than aunt, provides a further visual representation of the need for mothers to learn that marriage is not for show.

What can be interpreted as Mrs. Bennet’s words open the novel saying, “it is a truth universally acknowledged, that a single man in possession of a good fortune, must be in want of a wife” (Austen 3). In the beginning, Mrs. Bennet took business into her own hands, stopping at nothing to get her daughters married, even if that meant risking her daughter’s health, for instance. In the end, Mrs. Bennet was not completely tamed. However, she learns from her two eldest daughters that you can marry and be wealthy, but also be in love. Mrs. Bakshi, after Lalita rejects Mr. Kholi, yells to her husband, “she wants love to be there from the beginning. Where was the love when we first got married, huh? Tell her. Tell her that you marry first, then love grows” (61:36-61:48). In the end, Mr. and Mrs. Bakshi embrace at the sight of their two daughters getting married, which signals that Mrs. Bakshi learns through her eldest daughters’ love journeys, that marriages based on love are not wrong. Both Mrs. Bennet and Mrs. Bakshi become reeducated on the concept of marriage and come to understand that couples who have fallen in love can get married, so long as all cultures and classes are respected and embraced.

Love Marriage and Arranged Marriage: From Business to Affection. (2021, Mar 26). Retrieved from https://papersowl.com/examples/love-marriage-and-arranged-marriage-from-business-to-affection/