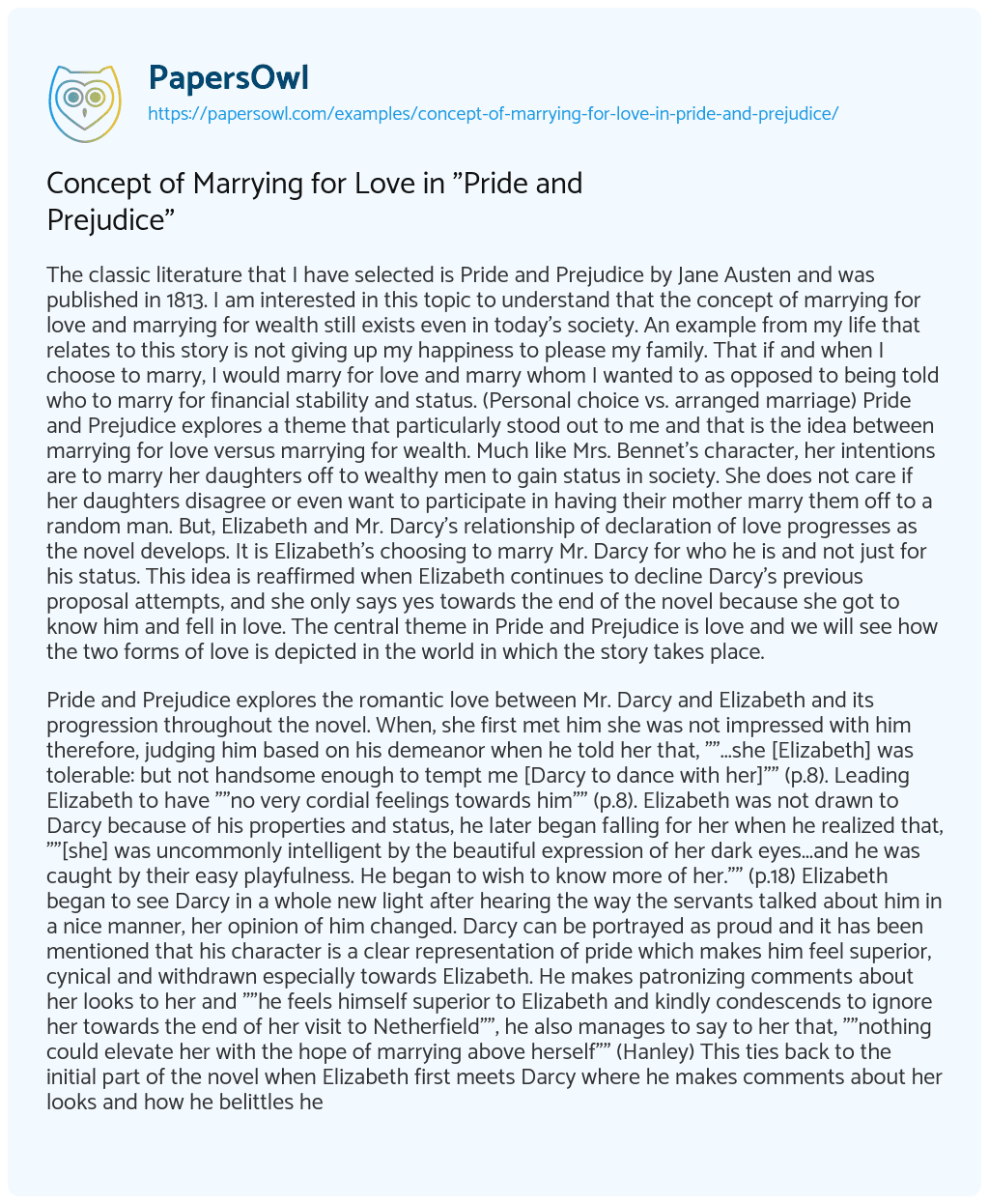 The classic literature that I have selected is Pride and Prejudice by Jane Austen and was published in 1813. I am interested in this topic to understand that the concept of marrying for love and marrying for wealth still exists even in today’s society. An example from my life that relates to this story is not giving up my happiness to please my family. That if and when I choose to marry, I would marry for love and marry whom I wanted to as opposed to being told who to marry for financial stability and status. (Personal choice vs. arranged marriage) Pride and Prejudice explores a theme that particularly stood out to me and that is the idea between marrying for love versus marrying for wealth. Much like Mrs. Bennet’s character, her intentions are to marry her daughters off to wealthy men to gain status in society. She does not care if her daughters disagree or even want to participate in having their mother marry them off to a random man. But, Elizabeth and Mr. Darcy’s relationship of declaration of love progresses as the novel develops. It is Elizabeth’s choosing to marry Mr. Darcy for who he is and not just for his status. This idea is reaffirmed when Elizabeth continues to decline Darcy’s previous proposal attempts, and she only says yes towards the end of the novel because she got to know him and fell in love. The central theme in Pride and Prejudice is love and we will see how the two forms of love is depicted in the world in which the story takes place.

Pride and Prejudice explores the romantic love between Mr. Darcy and Elizabeth and its progression throughout the novel. When, she first met him she was not impressed with him therefore, judging him based on his demeanor when he told her that, “”…she [Elizabeth] was tolerable: but not handsome enough to tempt me [Darcy to dance with her]”” (p.8). Leading Elizabeth to have “”no very cordial feelings towards him”” (p.8). Elizabeth was not drawn to Darcy because of his properties and status, he later began falling for her when he realized that, “”[she] was uncommonly intelligent by the beautiful expression of her dark eyes…and he was caught by their easy playfulness. He began to wish to know more of her.”” (p.18) Elizabeth began to see Darcy in a whole new light after hearing the way the servants talked about him in a nice manner, her opinion of him changed. Darcy can be portrayed as proud and it has been mentioned that his character is a clear representation of pride which makes him feel superior, cynical and withdrawn especially towards Elizabeth. He makes patronizing comments about her looks to her and “”he feels himself superior to Elizabeth and kindly condescends to ignore her towards the end of her visit to Netherfield””, he also manages to say to her that, “”nothing could elevate her with the hope of marrying above herself”” (Hanley) This ties back to the initial part of the novel when Elizabeth first meets Darcy where he makes comments about her looks and how he belittles her because he sees her as beneath him in social status and that is what makes him arrogant.

I would agree with Elizabeth’s initial thought upon meeting Darcy because he just keeps making comments to her about her looks and how she isn’t “”tempting”” enough to dance with and how her social status makes her inferior to him. I would be able to relate because that shows someone is arrogant, and arrogant is not an attractive characteristic. He is prideful and Elizabeth was initially prejudice towards Darcy’s lack of emotion. Personally speaking, when I look for someone that intrigues me, I am drawn to their sense of confidence, humor, and inviting personality. Someone like Darcy would not be someone I would even consider because the qualities he possesses are unattractive and if you want a romantic relationship to begin, it starts off with looks and then develops into much more as you get to know someone. That is exactly what happens between the two characters. Darcy and Elizabeth both get to know each other and once they did, they began to fall for one another and then the relationship between them shifts as these emotions further develop. Elizabeth begins to overcome her prejudice and Darcy overcomes his pride.

The deeper topic I chose to look into is the world of the story and how during this era, it was common for women to marry suitors who had financial wealth and social status.

“”The French aristocracy had resisted the winds of change and in the process, about 1600 of them lost their heads. Their English counterparts consented to accommodate the aspirations of the rising middle classes by permitting intermarriage with commoners. Pride and Prejudice depicts this silent process of social transformation in the lives of the English gentility.”” The quote relates to the theme because during the time when Pride and Prejudice was written, the emerging middle class was rising due the intermarriages between commoners. This is why the marriage between Elizabeth and Darcy in the end represents the social transformation and is also symbolic because Darcy is of the upper middle class and Elizabeth is a commoner and their marriage allowed for Darcy to keep his head and not be beheaded like the French aristocrats during this time period. “”The French aristocrats lost their heads not only because they were aristocrats but because of the assertion of their superiority. Darcy lost his arrogance and saved his head.””

Taking a closer look into the world of the story in which the time period the novel was written has impacted me with a sense of knowledge. The knowledge that there was a lot more going on during this time and that Jane Austen drew inspiration and wrote about it and incorporated it into her writing. She tied in deeper themes and concepts into the story and depicted these themes through characters like Darcy and Elizabeth that represents pride, prejudice, aristocracy, intermarriage between social classes that could disrupt the flow and exemplified social evolution.

Concept of Marrying for Love in "Pride and Prejudice". (2019, Apr 10). Retrieved from https://papersowl.com/examples/concept-of-marrying-for-love-in-pride-and-prejudice/