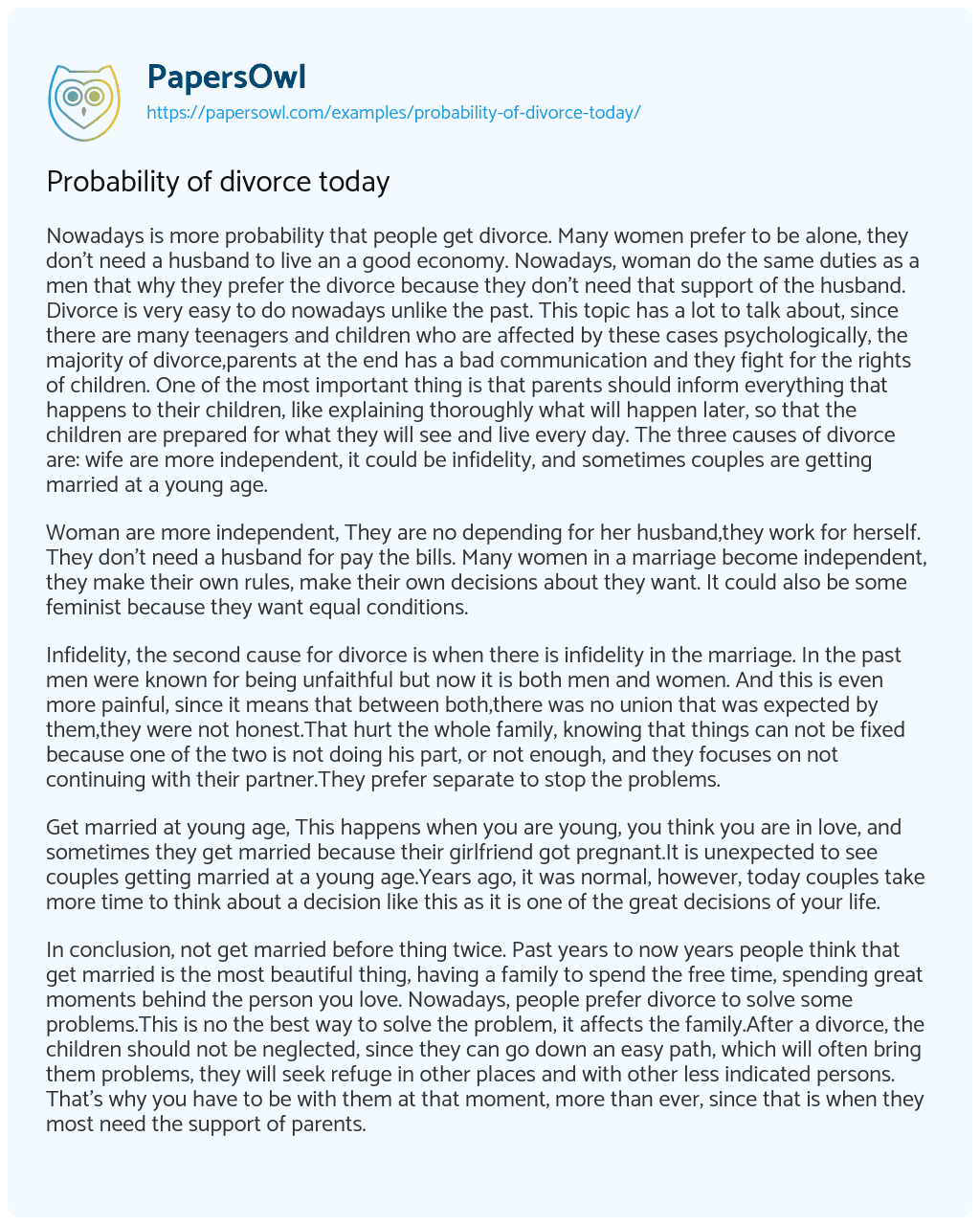 Nowadays is more probability that people get divorce. Many women prefer to be alone, they don’t need a husband to live an a good economy. Nowadays, woman do the same duties as a men that why they prefer the divorce because they don’t need that support of the husband. Divorce is very easy to do nowadays unlike the past. This topic has a lot to talk about, since there are many teenagers and children who are affected by these cases psychologically, the majority of divorce,parents at the end has a bad communication and they fight for the rights of children. One of the most important thing is that parents should inform everything that happens to their children, like explaining thoroughly what will happen later, so that the children are prepared for what they will see and live every day. The three causes of divorce are: wife are more independent, it could be infidelity, and sometimes couples are getting married at a young age.

Woman are more independent, They are no depending for her husband,they work for herself. They don’t need a husband for pay the bills. Many women in a marriage become independent, they make their own rules, make their own decisions about they want. It could also be some feminist because they want equal conditions.

Infidelity, the second cause for divorce is when there is infidelity in the marriage. In the past men were known for being unfaithful but now it is both men and women. And this is even more painful, since it means that between both,there was no union that was expected by them,they were not honest.That hurt the whole family, knowing that things can not be fixed because one of the two is not doing his part, or not enough, and they focuses on not continuing with their partner.They prefer separate to stop the problems.

Get married at young age, This happens when you are young, you think you are in love, and sometimes they get married because their girlfriend got pregnant.It is unexpected to see couples getting married at a young age.Years ago, it was normal, however, today couples take more time to think about a decision like this as it is one of the great decisions of your life.

In conclusion, not get married before thing twice. Past years to now years people think that get married is the most beautiful thing, having a family to spend the free time, spending great moments behind the person you love. Nowadays, people prefer divorce to solve some problems.This is no the best way to solve the problem, it affects the family.After a divorce, the children should not be neglected, since they can go down an easy path, which will often bring them problems, they will seek refuge in other places and with other less indicated persons. That’s why you have to be with them at that moment, more than ever, since that is when they most need the support of parents.

The Main Causes of Divorce

Questions before Filing for Divorce