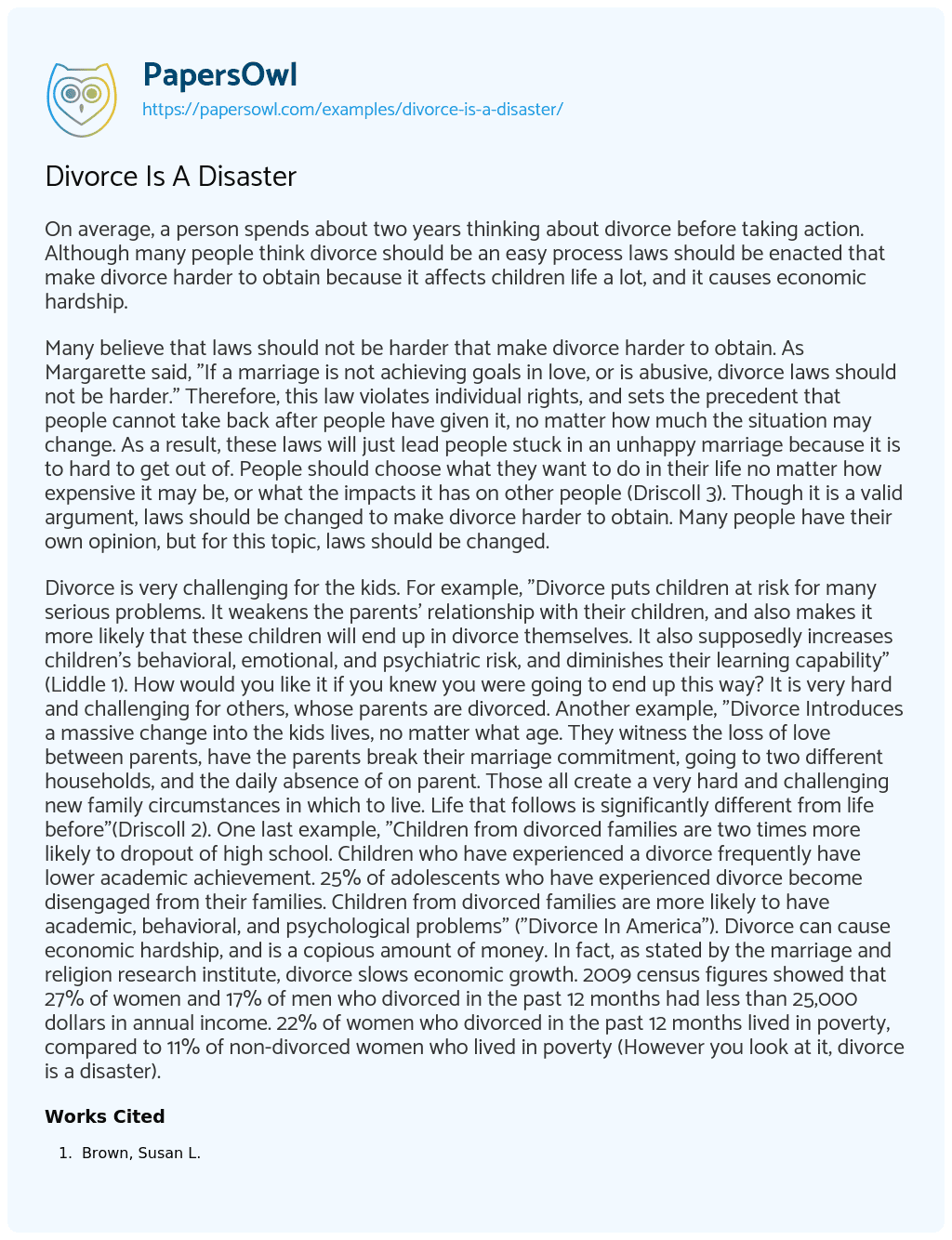 On average, a person spends about two years thinking about divorce before taking action. Although many people think divorce should be an easy process laws should be enacted that make divorce harder to obtain because it affects children life a lot, and it causes economic hardship.

Many believe that laws should not be harder that make divorce harder to obtain. As Margarette said, “If a marriage is not achieving goals in love, or is abusive, divorce laws should not be harder.” Therefore, this law violates individual rights, and sets the precedent that people cannot take back after people have given it, no matter how much the situation may change. As a result, these laws will just lead people stuck in an unhappy marriage because it is to hard to get out of. People should choose what they want to do in their life no matter how expensive it may be, or what the impacts it has on other people (Driscoll 3). Though it is a valid argument, laws should be changed to make divorce harder to obtain. Many people have their own opinion, but for this topic, laws should be changed.

Divorce is very challenging for the kids. For example, “Divorce puts children at risk for many serious problems. It weakens the parents’ relationship with their children, and also makes it more likely that these children will end up in divorce themselves. It also supposedly increases children’s behavioral, emotional, and psychiatric risk, and diminishes their learning capability” (Liddle 1). How would you like it if you knew you were going to end up this way? It is very hard and challenging for others, whose parents are divorced. Another example, “Divorce Introduces a massive change into the kids lives, no matter what age. They witness the loss of love between parents, have the parents break their marriage commitment, going to two different households, and the daily absence of on parent. Those all create a very hard and challenging new family circumstances in which to live. Life that follows is significantly different from life before”(Driscoll 2). One last example, “Children from divorced families are two times more likely to dropout of high school. Children who have experienced a divorce frequently have lower academic achievement. 25% of adolescents who have experienced divorce become disengaged from their families. Children from divorced families are more likely to have academic, behavioral, and psychological problems” (“Divorce In America”). Divorce can cause economic hardship, and is a copious amount of money. In fact, as stated by the marriage and religion research institute, divorce slows economic growth. 2009 census figures showed that 27% of women and 17% of men who divorced in the past 12 months had less than 25,000 dollars in annual income. 22% of women who divorced in the past 12 months lived in poverty, compared to 11% of non-divorced women who lived in poverty (However you look at it, divorce is a disaster).

Divorce Is A Disaster. (2020, Feb 05). Retrieved from https://papersowl.com/examples/divorce-is-a-disaster/