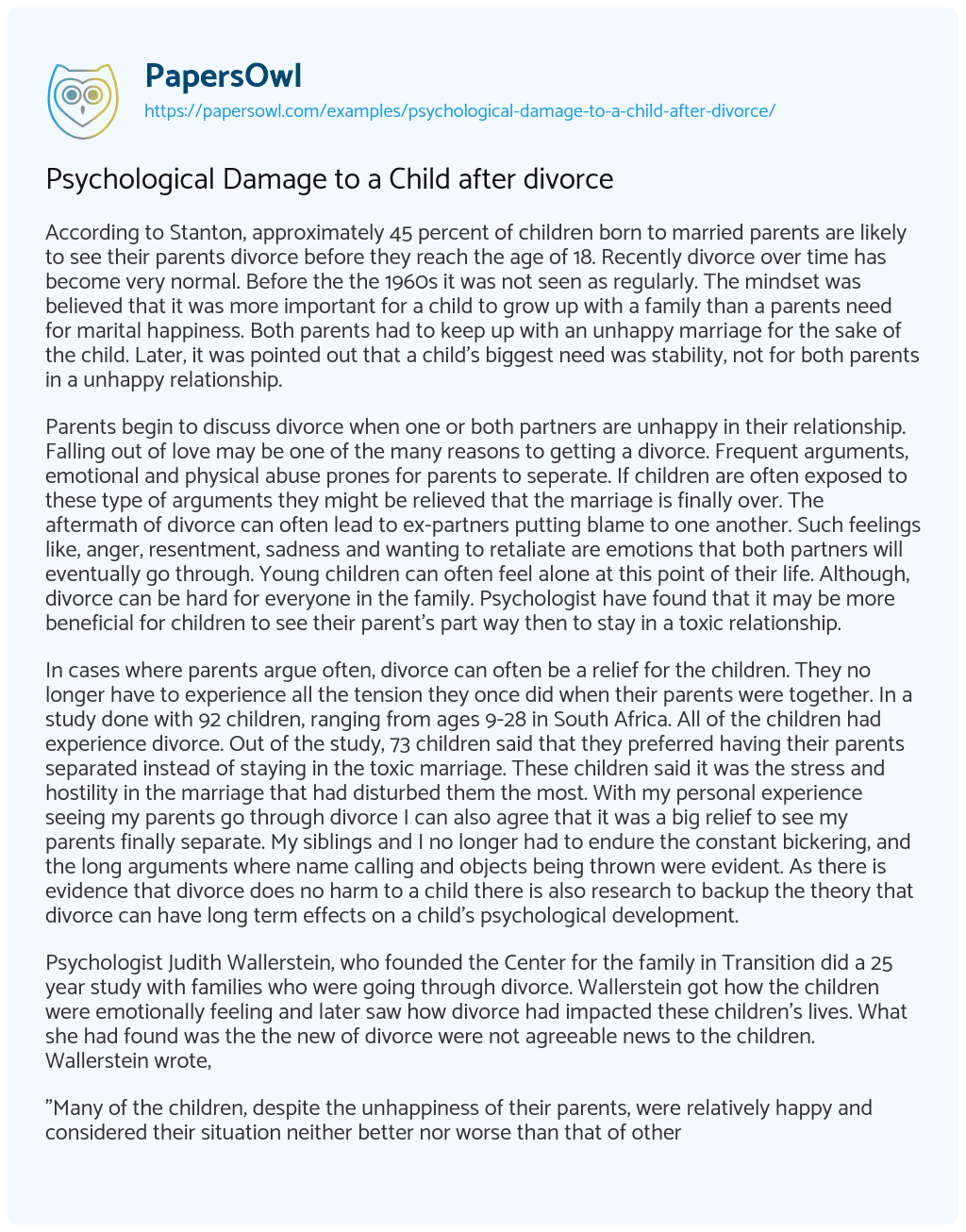 According to Stanton, approximately 45 percent of children born to married parents are likely to see their parents divorce before they reach the age of 18. Recently divorce over time has become very normal. Before the the 1960s it was not seen as regularly. The mindset was believed that it was more important for a child to grow up with a family than a parents need for marital happiness. Both parents had to keep up with an unhappy marriage for the sake of the child. Later, it was pointed out that a child’s biggest need was stability, not for both parents in a unhappy relationship.

Parents begin to discuss divorce when one or both partners are unhappy in their relationship. Falling out of love may be one of the many reasons to getting a divorce. Frequent arguments, emotional and physical abuse prones for parents to seperate. If children are often exposed to these type of arguments they might be relieved that the marriage is finally over. The aftermath of divorce can often lead to ex-partners putting blame to one another. Such feelings like, anger, resentment, sadness and wanting to retaliate are emotions that both partners will eventually go through. Young children can often feel alone at this point of their life. Although, divorce can be hard for everyone in the family. Psychologist have found that it may be more beneficial for children to see their parent’s part way then to stay in a toxic relationship.

In cases where parents argue often, divorce can often be a relief for the children. They no longer have to experience all the tension they once did when their parents were together. In a study done with 92 children, ranging from ages 9-28 in South Africa. All of the children had experience divorce. Out of the study, 73 children said that they preferred having their parents separated instead of staying in the toxic marriage. These children said it was the stress and hostility in the marriage that had disturbed them the most. With my personal experience seeing my parents go through divorce I can also agree that it was a big relief to see my parents finally separate. My siblings and I no longer had to endure the constant bickering, and the long arguments where name calling and objects being thrown were evident. As there is evidence that divorce does no harm to a child there is also research to backup the theory that divorce can have long term effects on a child’s psychological development.

Psychologist Judith Wallerstein, who founded the Center for the family in Transition did a 25 year study with families who were going through divorce. Wallerstein got how the children were emotionally feeling and later saw how divorce had impacted these children’s lives. What she had found was the the new of divorce were not agreeable news to the children. Wallerstein wrote,

“Many of the children, despite the unhappiness of their parents, were relatively happy and considered their situation neither better nor worse than that of other families around them. The lightning that struck them was the divorce, and they had not even been aware of the existence of a storm.”

In her five year mark what she conducted was that many of the children were clinically depressed, they had difficulty building relationships with their peers, and were doing poorly at school. They had difficulties with sleep and had constant behavioral problems. What her research found as the kids got older was that they spoke with sadness of their “lost” childhood, that disappeared with the news of their parents divorce. The children had constant fear of abandonment..

Psychological Damage to a Child after divorce. (2019, Sep 04). Retrieved from https://papersowl.com/examples/psychological-damage-to-a-child-after-divorce/

The Damage of Divorce on Children

Questions before Filing for Divorce