The Damage of Divorce on Children 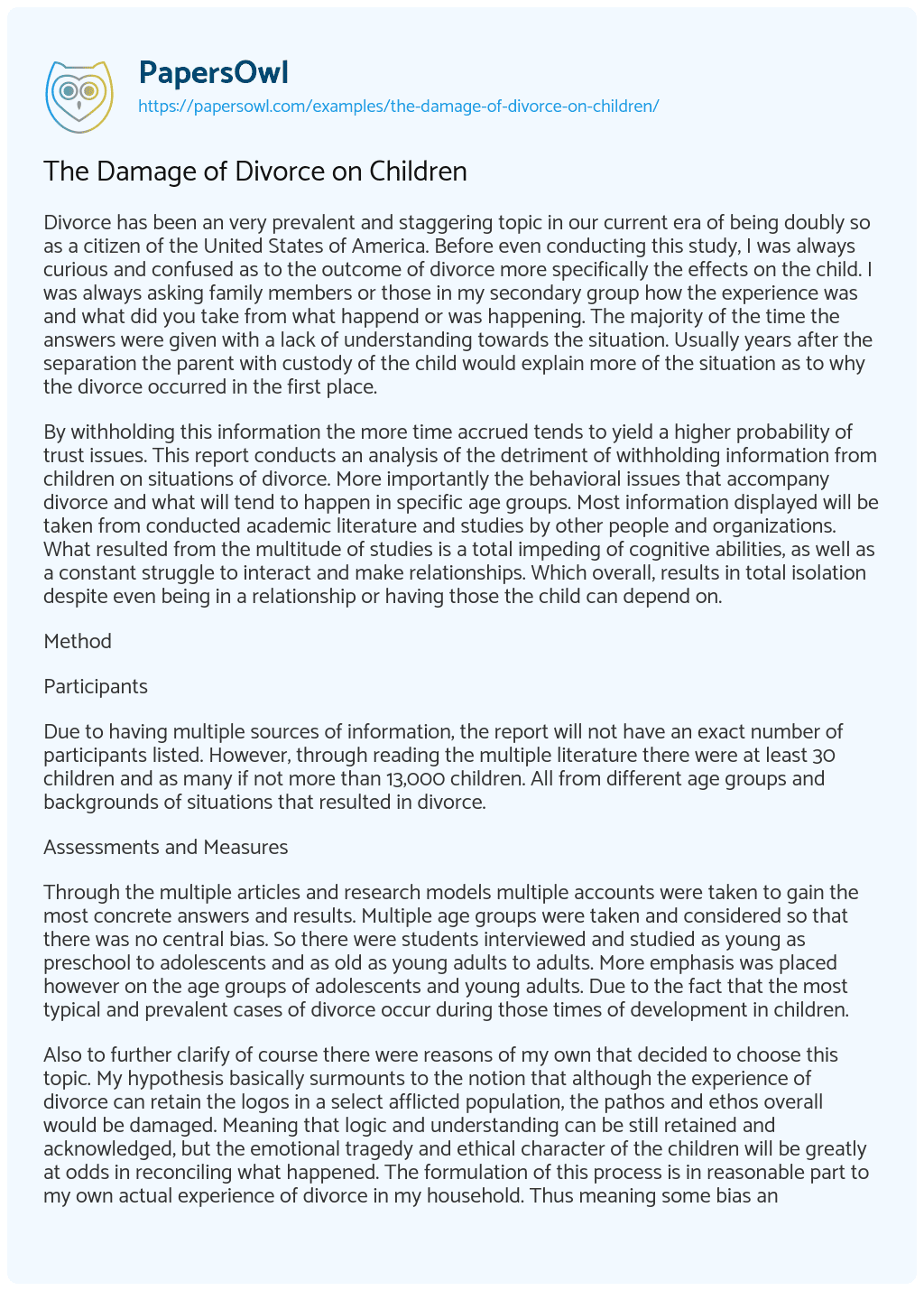 Divorce has been an very prevalent and staggering topic in our current era of being doubly so as a citizen of the United States of America. Before even conducting this study, I was always curious and confused as to the outcome of divorce more specifically the effects on the child. I was always asking family members or those in my secondary group how the experience was and what did you take from what happend or was happening. The majority of the time the answers were given with a lack of understanding towards the situation. Usually years after the separation the parent with custody of the child would explain more of the situation as to why the divorce occurred in the first place.

By withholding this information the more time accrued tends to yield a higher probability of trust issues. This report conducts an analysis of the detriment of withholding information from children on situations of divorce. More importantly the behavioral issues that accompany divorce and what will tend to happen in specific age groups. Most information displayed will be taken from conducted academic literature and studies by other people and organizations. What resulted from the multitude of studies is a total impeding of cognitive abilities, as well as a constant struggle to interact and make relationships. Which overall, results in total isolation despite even being in a relationship or having those the child can depend on.

Due to having multiple sources of information, the report will not have an exact number of participants listed. However, through reading the multiple literature there were at least 30 children and as many if not more than 13,000 children. All from different age groups and backgrounds of situations that resulted in divorce.

Through the multiple articles and research models multiple accounts were taken to gain the most concrete answers and results. Multiple age groups were taken and considered so that there was no central bias. So there were students interviewed and studied as young as preschool to adolescents and as old as young adults to adults. More emphasis was placed however on the age groups of adolescents and young adults. Due to the fact that the most typical and prevalent cases of divorce occur during those times of development in children.

Also to further clarify of course there were reasons of my own that decided to choose this topic. My hypothesis basically surmounts to the notion that although the experience of divorce can retain the logos in a select afflicted population, the pathos and ethos overall would be damaged. Meaning that logic and understanding can be still retained and acknowledged, but the emotional tragedy and ethical character of the children will be greatly at odds in reconciling what happened. The formulation of this process is in reasonable part to my own actual experience of divorce in my household. Thus meaning some bias and personal reasoning were factors in which this paper’s topic was chosen and researched.

To stay as accurate as possible I stuck to only literature published and researched under educational and organizational platforms. So no concrete data was taken from a commercial source or post. Except, if it added up with the information discovered or to further expand on concepts unexplored and to theorize of solutions. Through the multiple studies there is a constant decline in grade point average when there is an increase in divorce. The average tends to be a grade point average of 2.6 when both math and english are combined. To further examine the problem Fagan & Churchill (2012) states:

In the Kent State University Impact of Divorce Project, which used a national sample study of 699 elementary students, children from divorced homes performed worse in reading, spelling, and math and repeated a grade more frequently than did children in intact two-parent families. The project’s findings led the researchers to conclude that children and young adolescents suffered long term negative effects following divorce. ( p. 28) In addition, things can proceed as even worse when the family infrastructure becomes damaged. Wanda Williams-Owens (2017) covers the fact that:

The Bureau of Justice Statistics found that 72 percent of jailed juveniles come from a disintegrated family (Georgia Supreme Court Commission on Children Marriage and Family Law 2005). A study conducted in Wisconsin found that the rate of incarceration of children who parents were divorced was 12 times higher than children in two-parent families. ( p. 17)

Meaning amongst the child divorce population there tends to be a correlation with juvenile crime after at least separation in the household. Also seeming to be in tandem with the juvenile behaviour is also emotional damage. One label that seems to be used in regards of these feelings is what people call, “Broken Home Syndrome”. Basically referring to how the incident ends up in a “Broken Home” and even more damagingly expresses a feeling of blame on the child’s part. Mobila (2014) expresses how:

For the children of the parents getting divorced, this can be considered the most traumatic of all the experiences. The child could feel powerless to his or her parents’ separation and wonder if he or she was the cause of the divorce. The child may experience a very hard time coping with being separated from one of the parents, which could ultimately lead to separation anxiety. ( p. 1) Proving the trauma to be so damaging to children of divorce that even the logos of the situation is suppressed even if understanding everything as to why. Making a cage of extending isolation to reality and even emotions to never be manifested at the proper time. So emotionally the child will be damaged through maintaining certain negative emotions such as anxiety, depression, anger, etc. Yet at the same time ,if traumatic enough, the emotions of the afflicted child will never be cycled or expressed properly for extent amounts of time if not ever. Meaning my hypothesis on the matter was slightly correct, but was also flawed to a great extent. Due to the the fact that truth is subjective to one’s own perception of reality of life and what is expressed. So yes the pathos and ethos do struggle within the child, however if affected to an extent the objective logos can also be damaged. Which will allow a child to be stuck in a reality dictated in what he or she believes to be the fault. Whether it is to be themselves as the full extent of the blame or even a non affiliated party.

Through the written literature many answers were given to this report and its assessment. There is a display of massive and minor behavioral issues that result from divorce that either reside permanently or not in children. The ethos and pathos of the child are strong and at odds, however in situations even the logos can also be refuted by the child. Meaning that even an objective reality or truth of a situation can be reflected on the child’s own fault or on someone or something else. Basically in broad terms the cognitive ability and assessment of children after divorce tend to be greatly rendered and ineffective. Still, the definitive or assumed answer as to when and how parents should divulge full information on the divorce to their children is still difficult to say. Especially, if the divorce was due to an affair in the relationship it’s extremely difficult to say. One opinion stated by Haltzman (2013) is:

The simple answer to this question is that there is no simple answer to this question. If parents choose to say that an extramarital affair occurred, the information needs to be age-appropriate. The nature of monogamy may be a difficult concept for very young children to grasp, but most pre-schoolers that grow up in intact families have a general sense that their parents are only supposed to be affectionate toward each other. ( p. 1) While on the other hand Moorhead (2013) explains that even for young adults:

But if that home and that family crumble, the story is very different: young people start to question everything they’ve come to know as true and strong and feeling the rug pulled from under them can lead them to question all sorts of assumptions in their lives. Suddenly, everything they thought was real isn’t real. They start to wonder whether their parents ever loved one another, whether their marriage has been a total sham. ( p. 1) Even a married couple explaining this situation to an eighteen-year-old will only be doing the same amount of harm if not more. The consensus for the maturity of a brain is around the age of twenty-four, yet more than maturity is a factor as to why.

To at least explain the best way possible this conceptualization takes from my own experience and what seems to be an agreement of the experience. No matter what time of development the reality of a child with parents is almost parallel to a fantasy. Every aspect and experience encompasses this amalgamation of dreams that resides within. Except, once divorce or separation occurs just like a fantasy you can not assess the real from the fake. So until the afflicted child reaffirms and dictates the reality wished and what is the true logos of the situation. The child encounters an endless freefall from the shattered fantasy and continues to do so until all the pieces are picked up and a reality of truth is fully understood and acknowledged. So there should definitely be a study dedicated to the answer of how and when to confront the matter. With such research I believe immensely that these behavioral problems and other issues would be greatly mitigated and avoided.

The Damage of Divorce on Children. (2019, Jun 19). Retrieved from https://papersowl.com/examples/the-damage-of-divorce-on-children/

Moderating Factors for Children of Divorce

Effects of Marriage and Divorce on Children