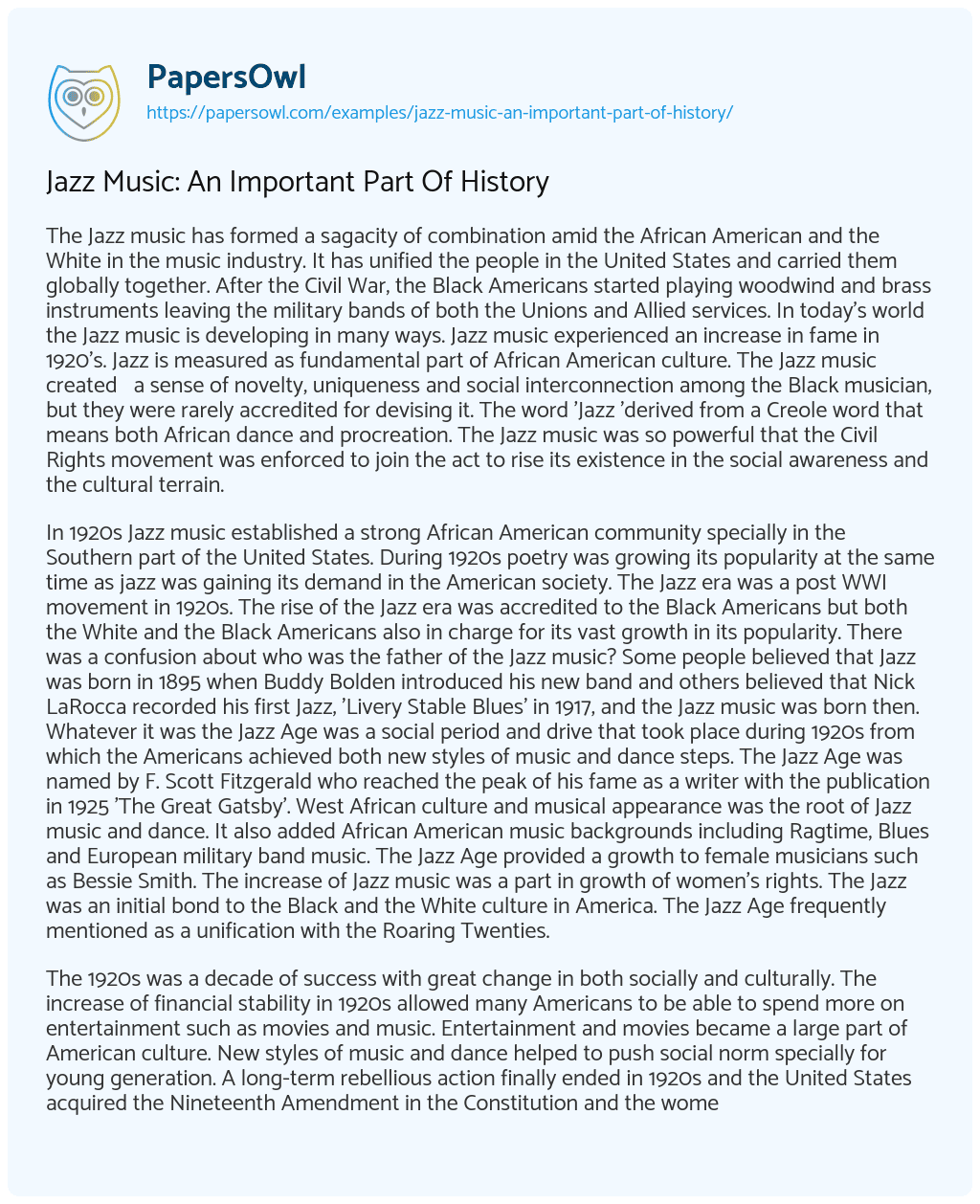 The Jazz music has formed a sagacity of combination amid the African American and the White in the music industry. It has unified the people in the United States and carried them globally together. After the Civil War, the Black Americans started playing woodwind and brass instruments leaving the military bands of both the Unions and Allied services. In today’s world the Jazz music is developing in many ways. Jazz music experienced an increase in fame in 1920’s. Jazz is measured as fundamental part of African American culture. The Jazz music created   a sense of novelty, uniqueness and social interconnection among the Black musician, but they were rarely accredited for devising it. The word ‘Jazz ‘derived from a Creole word that means both African dance and procreation. The Jazz music was so powerful that the Civil Rights movement was enforced to join the act to rise its existence in the social awareness and the cultural terrain.

In 1920s Jazz music established a strong African American community specially in the Southern part of the United States. During 1920s poetry was growing its popularity at the same time as jazz was gaining its demand in the American society. The Jazz era was a post WWI movement in 1920s. The rise of the Jazz era was accredited to the Black Americans but both the White and the Black Americans also in charge for its vast growth in its popularity. There was a confusion about who was the father of the Jazz music? Some people believed that Jazz was born in 1895 when Buddy Bolden introduced his new band and others believed that Nick LaRocca recorded his first Jazz, ‘Livery Stable Blues’ in 1917, and the Jazz music was born then. Whatever it was the Jazz Age was a social period and drive that took place during 1920s from which the Americans achieved both new styles of music and dance steps. The Jazz Age was named by F. Scott Fitzgerald who reached the peak of his fame as a writer with the publication in 1925 ‘The Great Gatsby’. West African culture and musical appearance was the root of Jazz music and dance. It also added African American music backgrounds including Ragtime, Blues and European military band music. The Jazz Age provided a growth to female musicians such as Bessie Smith. The increase of Jazz music was a part in growth of women’s rights. The Jazz was an initial bond to the Black and the White culture in America. The Jazz Age frequently mentioned as a unification with the Roaring Twenties.

The 1920s was a decade of success with great change in both socially and culturally. The increase of financial stability in 1920s allowed many Americans to be able to spend more on entertainment such as movies and music. Entertainment and movies became a large part of American culture. New styles of music and dance helped to push social norm specially for young generation. A long-term rebellious action finally ended in 1920s and the United States acquired the Nineteenth Amendment in the Constitution and the women achieved their rights to vote. The new ‘American Women’ were born. The women were no longer limited to working as home helps, women were more easily able to earn money by working as a clerk in offices, jobs in retail stores and in Jazz clubs also. Advertising gradually pointing women to focus on a new approach in appealing to their newly adopt wisdom of self-regulating femininity. Jazz was an American music which initially illustrated the attention of the French. The media in Paris started publishing the new trend of Jazz and exoticism. The new trend of the new women was mentioned as ‘flappers. In 1920s the flappers were the energetic young women who wore short skirts, listened to jazz music, bobbled hair and flaunted their scorn for what then measured as an okay behavior. The flappers would wear the newest fashions, be profligate living, smoke, know the latest dance style and drink alcohol. From 1915 to 1955, Jazz was the leading form of widespread music for dancing in the United States. Jazz was basically creation of the Black Americans and its audiences were diverse, while in large portion now the audience of this tune is mostly the White. Jazz was more than just a music, it was a drive, a cultural drive that influenced the young generation in language, dress and attitude. The Jazz Age got its popularity at the time when the sale, distribution and production of alcohol was prohibited in the United States but still there was a led to the progress of undisclosed illegal bars mostly in urban areas.

Jazz was always been an urban music. Jazz tied to urban nightlife, dance halls and concert stages. Jazz music aided to urbanize America and as well as African -American lifestyles. The Jazz became more notable after WWII. The Jazz became self -deliberately as a music intended for listening than to dance. Jazz has been captivated by other sorts of music like hip hop, pop and rock. Because of its popularity Pop singers perform with Jazz musicians. The Jazz music has a distinctive diagram covers a melody that starts with a certain key increase in a higher pitch, and at that point transfers in low pitch. Jazz was known as people’s music because it was deeply influenced by the nearby social conditions where it was played. Many Rap musicians combined rap with Jazz. Jazz is not admired in the United States only, it is very popular to the Jazz Lovers around the world.

The Jazz is the only home-grown music besides the Native American music. Harmony and rhythm are the two main characteristics of Jazz music. It also has improvisation, and for that, the transcript that makes melody hums fuller. Jazz gave the African American’s their voice and declared that they had a very actual pole in the America and its success. The Jazz was widespread in the 20th century for the Whites to show briefly support and interest the Black Americans and their culture. Jazz has an impact on the politics, too. In 1950s affection of the Jazz music completed a part of an elect group with pleasing open-minded perceptions and awareness.