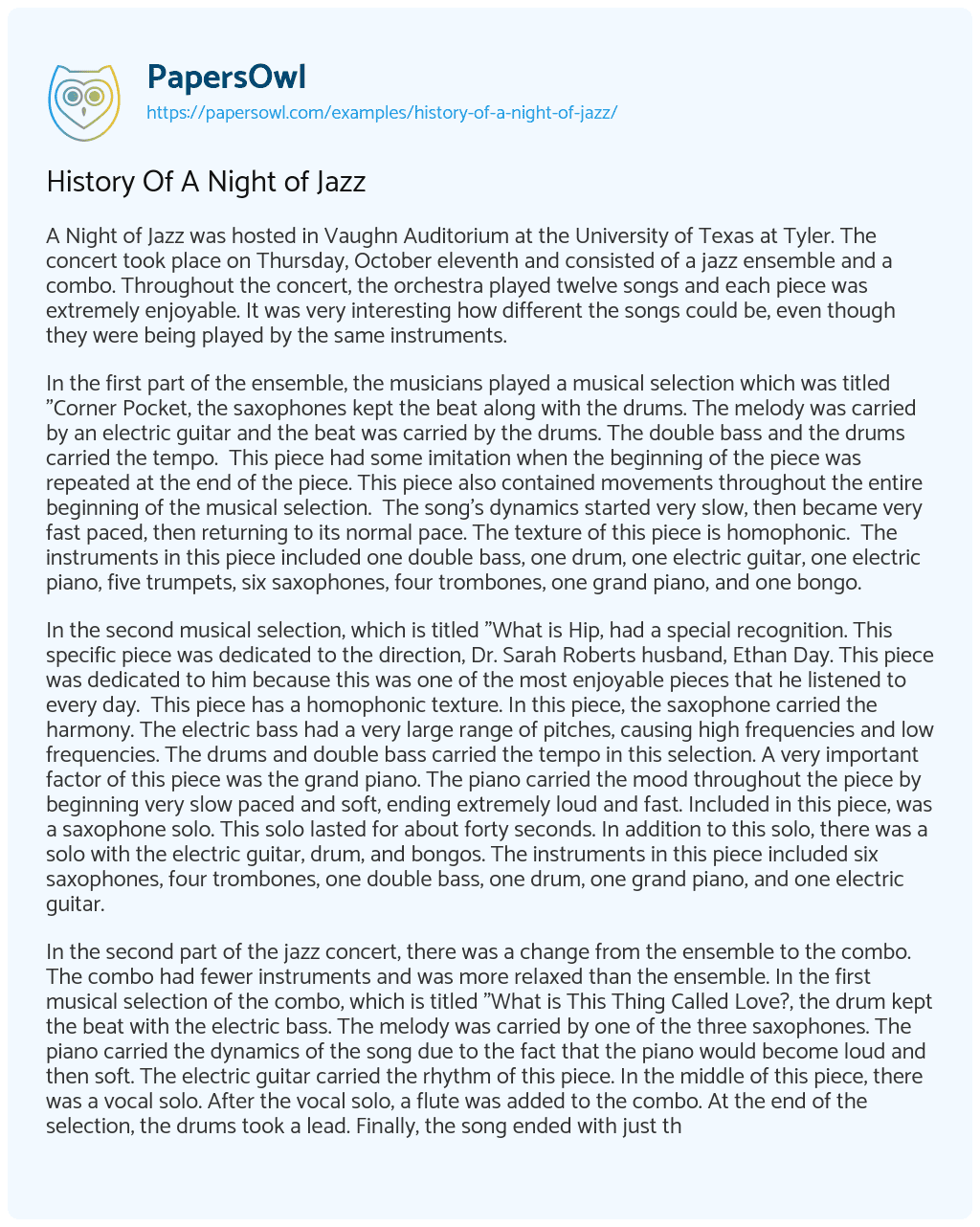 A Night of Jazz was hosted in Vaughn Auditorium at the University of Texas at Tyler. The concert took place on Thursday, October eleventh and consisted of a jazz ensemble and a combo. Throughout the concert, the orchestra played twelve songs and each piece was extremely enjoyable. It was very interesting how different the songs could be, even though they were being played by the same instruments.

In the first part of the ensemble, the musicians played a musical selection which was titled “Corner Pocket, the saxophones kept the beat along with the drums. The melody was carried by an electric guitar and the beat was carried by the drums. The double bass and the drums carried the tempo.  This piece had some imitation when the beginning of the piece was repeated at the end of the piece. This piece also contained movements throughout the entire beginning of the musical selection.  The song’s dynamics started very slow, then became very fast paced, then returning to its normal pace. The texture of this piece is homophonic.  The instruments in this piece included one double bass, one drum, one electric guitar, one electric piano, five trumpets, six saxophones, four trombones, one grand piano, and one bongo.

In the second musical selection, which is titled “What is Hip, had a special recognition. This specific piece was dedicated to the direction, Dr. Sarah Roberts husband, Ethan Day. This piece was dedicated to him because this was one of the most enjoyable pieces that he listened to every day.  This piece has a homophonic texture. In this piece, the saxophone carried the harmony. The electric bass had a very large range of pitches, causing high frequencies and low frequencies. The drums and double bass carried the tempo in this selection. A very important factor of this piece was the grand piano. The piano carried the mood throughout the piece by beginning very slow paced and soft, ending extremely loud and fast. Included in this piece, was a saxophone solo. This solo lasted for about forty seconds. In addition to this solo, there was a solo with the electric guitar, drum, and bongos. The instruments in this piece included six saxophones, four trombones, one double bass, one drum, one grand piano, and one electric guitar.

In the second part of the jazz concert, there was a change from the ensemble to the combo. The combo had fewer instruments and was more relaxed than the ensemble. In the first musical selection of the combo, which is titled “What is This Thing Called Love?, the drum kept the beat with the electric bass. The melody was carried by one of the three saxophones. The piano carried the dynamics of the song due to the fact that the piano would become loud and then soft. The electric guitar carried the rhythm of this piece. In the middle of this piece, there was a vocal solo. After the vocal solo, a flute was added to the combo. At the end of the selection, the drums took a lead. Finally, the song ended with just the drums, grand piano, and electric guitar. This specific piece was softer than the other musical selections in the combo. Throughout this entire musical selection, the instruments included trumpets, saxophones, electric guitar, drums, grand piano, and one double bass. This piece is considered homophonic.

The second musical selection of the combo is titled “Night Train, the beat was carried by the drums and electric guitar. The melody in this piece was carried by multiple saxophones. The song began slow and kept a very steady beat. The electric guitar carried the rhythm and the grand piano carried the dynamic of this piece. The drums then began to pick up the pace and the dynamics of this piece became fast and louder than the at the beginning of the piece. Throughout the whole change of the dynamics, the beat remained constant. In the middle of the song, there was a saxophone solo while the drums keeping the beat. To conclude this piece and the jazz combo portion, all instruments stopped except for one saxophone; it played one final note slowly. This piece is considered homophonic. The instruments in this piece include trumpets, saxophones, an electric guitar, drums, grand piano, and one double bass.

Overall, the remaining pieces of the jazz ensemble and combo were very amazing.  The environment around the concert was very pleasurable, due to the fact that it was very relaxed, yet had a sense of professionalism. Each piece was a joy to listen to because while most of the musical selections had the same instruments being played, no two pieces sounded alike causing an interest in each musical selection. The interest that was formed from the musical selections ensured that each member of the audience was alert and fascinated by the concert.

In conclusion, this was an extremely enjoyable concert for most everyone in attendance. The concert was entertaining and it was interesting to watch how the jazz concert was live and learn about each musical selection in depth. Each musical selection had a different sound, yet all pieces had the same musical instruments.  The audience seemed to be engaged in the concert by tapping their feet to the beat or shaking their head, which was amazing to witness. This concert provided the audience with a surprisingly amusing time, even the men and woman who seemed to be skeptical about the about the general idea of a jazz concert. Overall, this was a fantastic concert to attend.

History Of A Night of Jazz. (2019, Jan 18). Retrieved from https://papersowl.com/examples/history-of-a-night-of-jazz/