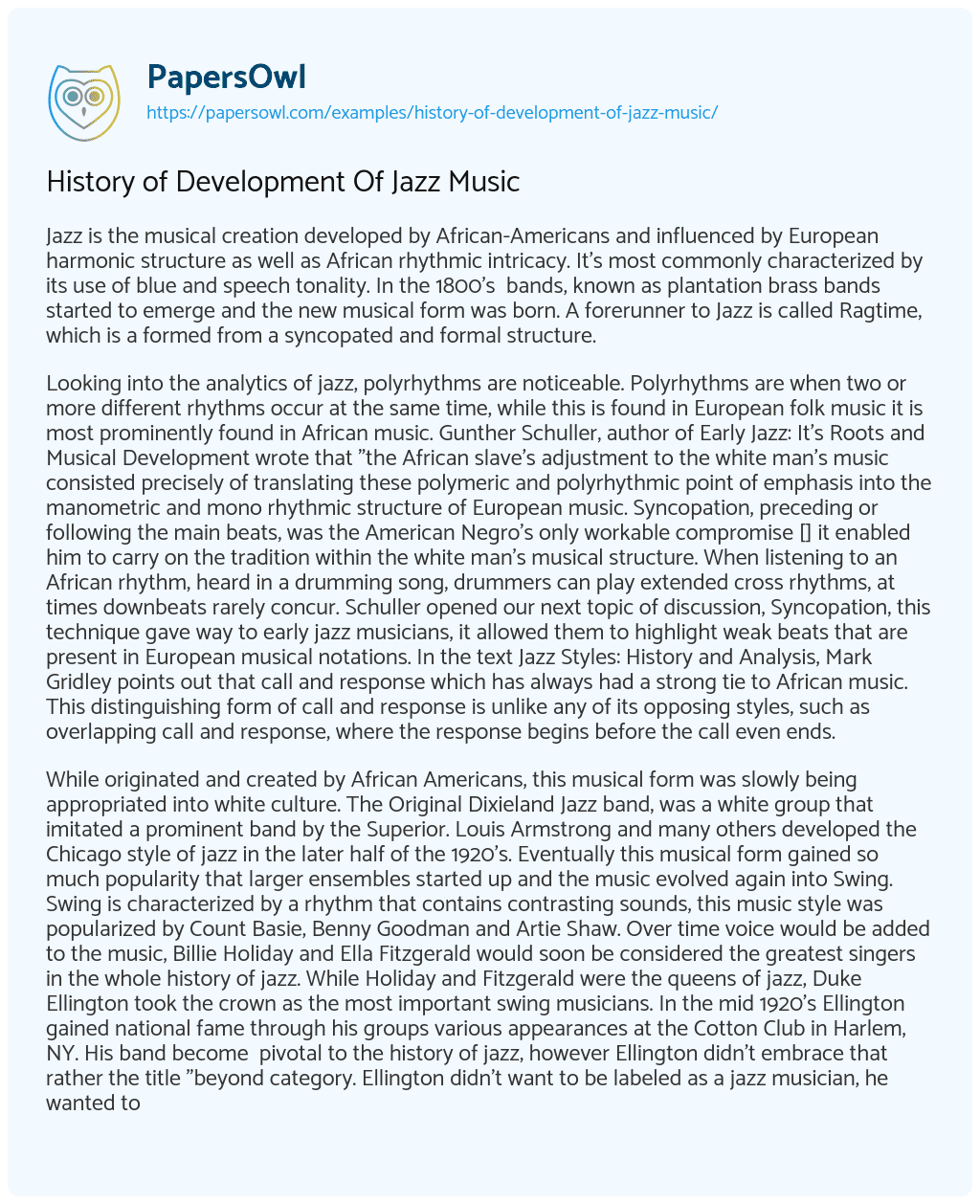 Jazz is the musical creation developed by African-Americans and influenced by European harmonic structure as well as African rhythmic intricacy. It’s most commonly characterized by its use of blue and speech tonality. In the 1800’s  bands, known as plantation brass bands started to emerge and the new musical form was born. A forerunner to Jazz is called Ragtime, which is a formed from a syncopated and formal structure.

Looking into the analytics of jazz, polyrhythms are noticeable. Polyrhythms are when two or more different rhythms occur at the same time, while this is found in European folk music it is most prominently found in African music. Gunther Schuller, author of Early Jazz: It’s Roots and Musical Development wrote that “the African slave’s adjustment to the white man’s music consisted precisely of translating these polymeric and polyrhythmic point of emphasis into the manometric and mono rhythmic structure of European music. Syncopation, preceding or following the main beats, was the American Negro’s only workable compromise [] it enabled him to carry on the tradition within the white man’s musical structure. When listening to an African rhythm, heard in a drumming song, drummers can play extended cross rhythms, at times downbeats rarely concur. Schuller opened our next topic of discussion, Syncopation, this technique gave way to early jazz musicians, it allowed them to highlight weak beats that are present in European musical notations. In the text Jazz Styles: History and Analysis, Mark Gridley points out that call and response which has always had a strong tie to African music. This distinguishing form of call and response is unlike any of its opposing styles, such as overlapping call and response, where the response begins before the call even ends.

While originated and created by African Americans, this musical form was slowly being appropriated into white culture. The Original Dixieland Jazz band, was a white group that imitated a prominent band by the Superior. Louis Armstrong and many others developed the Chicago style of jazz in the later half of the 1920’s. Eventually this musical form gained so much popularity that larger ensembles started up and the music evolved again into Swing. Swing is characterized by a rhythm that contains contrasting sounds, this music style was popularized by Count Basie, Benny Goodman and Artie Shaw. Over time voice would be added to the music, Billie Holiday and Ella Fitzgerald would soon be considered the greatest singers in the whole history of jazz. While Holiday and Fitzgerald were the queens of jazz, Duke Ellington took the crown as the most important swing musicians. In the mid 1920’s Ellington gained national fame through his groups various appearances at the Cotton Club in Harlem, NY. His band become  pivotal to the history of jazz, however Ellington didn’t embrace that rather the title “beyond category. Ellington didn’t want to be labeled as a jazz musician, he wanted to be known as a great American musician. Duke Ellington, was a turning point for the American music industry, he was the king of jazz, and performed with his band up until he died.

Today, jazz music remains to influence society and is continuously evolving. However, just as jazz continues to grow so does appropriation of this musical genre and others developed by African Americans.

History of Development Of Jazz Music. (2019, Jul 13). Retrieved from https://papersowl.com/examples/history-of-development-of-jazz-music/