Billie Holiday: One of the most Influential Jazz Singers 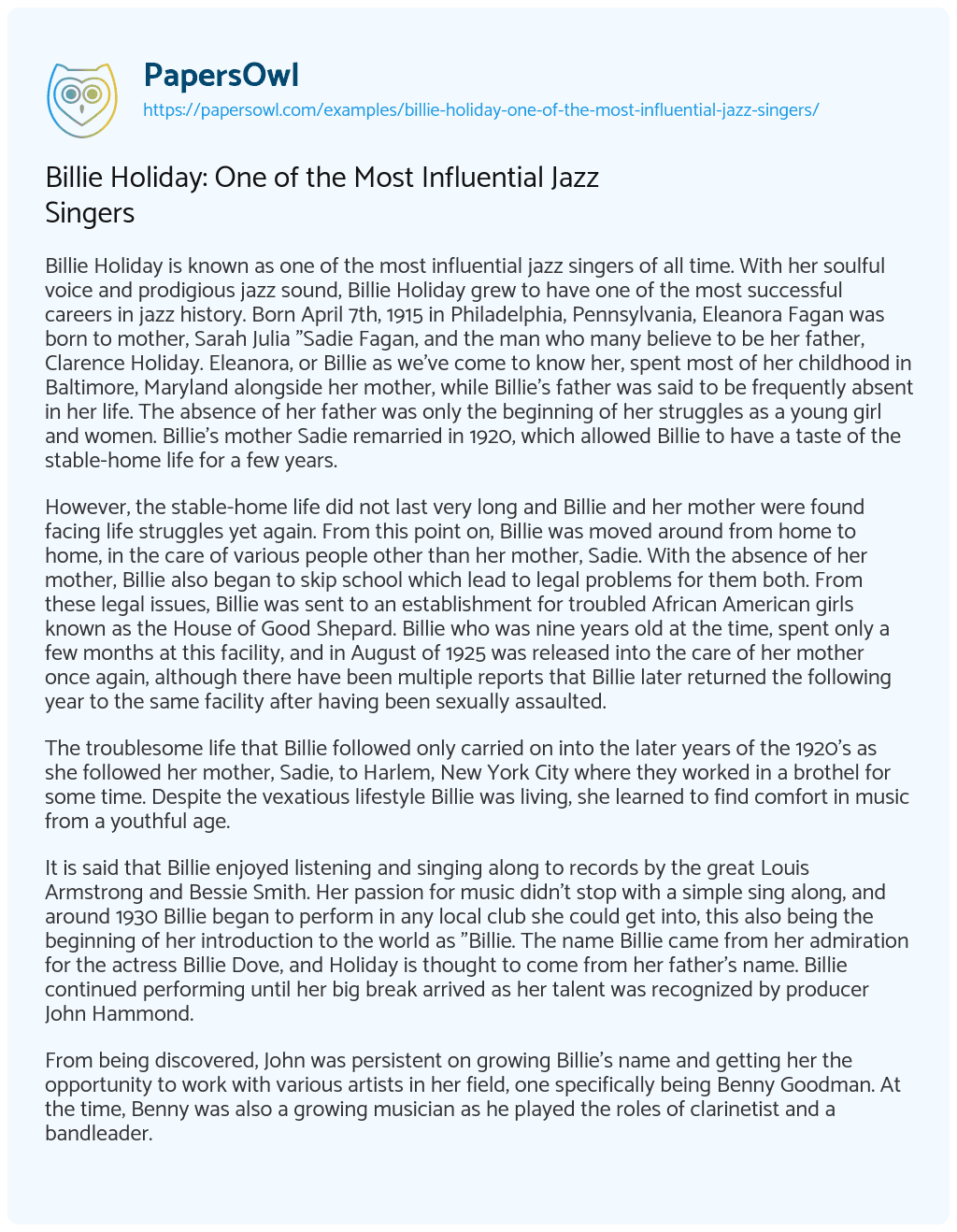 Billie Holiday is known as one of the most influential jazz singers of all time. With her soulful voice and prodigious jazz sound, Billie Holiday grew to have one of the most successful careers in jazz history. Born April 7th, 1915 in Philadelphia, Pennsylvania, Eleanora Fagan was born to mother, Sarah Julia “Sadie Fagan, and the man who many believe to be her father, Clarence Holiday. Eleanora, or Billie as we’ve come to know her, spent most of her childhood in Baltimore, Maryland alongside her mother, while Billie’s father was said to be frequently absent in her life. The absence of her father was only the beginning of her struggles as a young girl and women. Billie’s mother Sadie remarried in 1920, which allowed Billie to have a taste of the stable-home life for a few years.

However, the stable-home life did not last very long and Billie and her mother were found facing life struggles yet again. From this point on, Billie was moved around from home to home, in the care of various people other than her mother, Sadie. With the absence of her mother, Billie also began to skip school which lead to legal problems for them both. From these legal issues, Billie was sent to an establishment for troubled African American girls known as the House of Good Shepard. Billie who was nine years old at the time, spent only a few months at this facility, and in August of 1925 was released into the care of her mother once again, although there have been multiple reports that Billie later returned the following year to the same facility after having been sexually assaulted.

The troublesome life that Billie followed only carried on into the later years of the 1920’s as she followed her mother, Sadie, to Harlem, New York City where they worked in a brothel for some time. Despite the vexatious lifestyle Billie was living, she learned to find comfort in music from a youthful age.

It is said that Billie enjoyed listening and singing along to records by the great Louis Armstrong and Bessie Smith. Her passion for music didn’t stop with a simple sing along, and around 1930 Billie began to perform in any local club she could get into, this also being the beginning of her introduction to the world as “Billie. The name Billie came from her admiration for the actress Billie Dove, and Holiday is thought to come from her father’s name. Billie continued performing until her big break arrived as her talent was recognized by producer John Hammond.

From being discovered, John was persistent on growing Billie’s name and getting her the opportunity to work with various artists in her field, one specifically being Benny Goodman. At the time, Benny was also a growing musician as he played the roles of clarinetist and a bandleader.

Billie Holiday: One of the Most Influential Jazz Singers. (2020, Apr 02). Retrieved from https://papersowl.com/examples/billie-holiday-one-of-the-most-influential-jazz-singers/