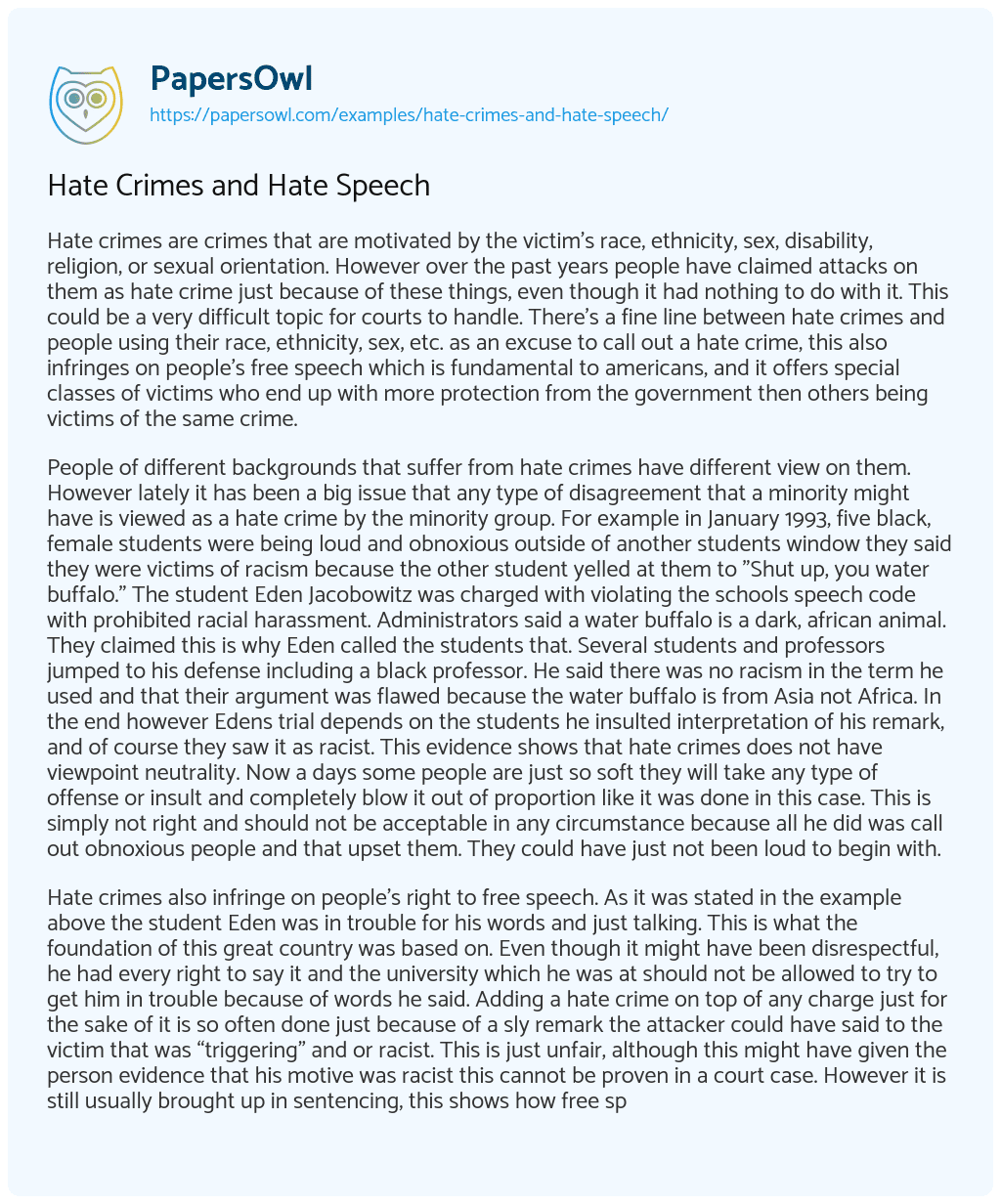 Hate crimes are crimes that are motivated by the victim’s race, ethnicity, sex, disability, religion, or sexual orientation. However over the past years people have claimed attacks on them as hate crime just because of these things, even though it had nothing to do with it. This could be a very difficult topic for courts to handle. There’s a fine line between hate crimes and people using their race, ethnicity, sex, etc. as an excuse to call out a hate crime, this also infringes on people’s free speech which is fundamental to americans, and it offers special classes of victims who end up with more protection from the government then others being victims of the same crime.

People of different backgrounds that suffer from hate crimes have different view on them. However lately it has been a big issue that any type of disagreement that a minority might have is viewed as a hate crime by the minority group. For example in January 1993, five black, female students were being loud and obnoxious outside of another students window they said they were victims of racism because the other student yelled at them to ”Shut up, you water buffalo.” The student Eden Jacobowitz was charged with violating the schools speech code with prohibited racial harassment. Administrators said a water buffalo is a dark, african animal. They claimed this is why Eden called the students that. Several students and professors jumped to his defense including a black professor. He said there was no racism in the term he used and that their argument was flawed because the water buffalo is from Asia not Africa. In the end however Edens trial depends on the students he insulted interpretation of his remark, and of course they saw it as racist. This evidence shows that hate crimes does not have viewpoint neutrality. Now a days some people are just so soft they will take any type of offense or insult and completely blow it out of proportion like it was done in this case. This is simply not right and should not be acceptable in any circumstance because all he did was call out obnoxious people and that upset them. They could have just not been loud to begin with.

Hate crimes also infringe on people’s right to free speech. As it was stated in the example above the student Eden was in trouble for his words and just talking. This is what the foundation of this great country was based on. Even though it might have been disrespectful, he had every right to say it and the university which he was at should not be allowed to try to get him in trouble because of words he said. Adding a hate crime on top of any charge just for the sake of it is so often done just because of a sly remark the attacker could have said to the victim that was “triggering” and or racist. This is just unfair, although this might have given the person evidence that his motive was racist this cannot be proven in a court case. However it is still usually brought up in sentencing, this shows how free speech is violated. For example R.A.V. v. City of St. Paul, in this city you can’t display symbols that can cause anger, or resentment in the basis of race, color, etc. In this case some white kids were charged with violating that rule when they burned a cross on a black family’s property. The flaw with the rule however was that it was not content neutral or viewpoint-neutral. Justice Antonin Scalia said that the rule was invalid because “it prohibits otherwise permitted speech solely on the basis of the subjects the speech addresses.” The justice shows that it does infringe on our right to free speech because what they did was permitted however because of the basis of the subject they addressed is what made it unlawful. Although what the white kids did was ethically and morally wrong they did not break any law. Free speech is probably the most important thing Americans have and giving it up is just something that should not stand.

Finally hate crimes also offers special classes of victims who end up with more protection from the government then others being victims of the same crime. There is a good amount of evidence showing that now all hate crimes are enforced equally. For example in Wisconsin, Pastor Ralph Ovadal, the founder of Wisconsin Christians United was attacked in 1996. He was attacked for protested a pro-gay display at a public school. The pastor held a sign that read “Homosexuality is Wrong”. A random man grabbed his sign and hurried off, however the pastor confronted the man about taking his sign, the pastor was then struck in the face and knocked to the ground. The medical report said the assault cause”abrasions and contusions”. However the man who assault the pastor was never charged with a hate crime. Even though he was not charged with anything, it is very obvious that this was a “hate crime”. This shows that apparently, some hate crime victims are more important than others. This just shows that these crimes are extremely bias. This threatens our country and society’s values, like equality within its citizens and peace in a diverse economy. In 2016 for example some states made killing a police officer a hate crime, after reports that in several US cities people were purposely targeting and killing police officers. Although making these laws showed more equality on the topic of hate crimes some people still opposed it. The opposition would state that this went too far, because harsher sentences for assault or murder on law enforcement already was a thing. This argument shows how people who support hate crimes only support it for certain people which is unfair because we are all supposed to be considered equal.

To finish hate crimes are a very touchy subject that should be investigated thoroughly. So people are not punished for someone being to sensitive and wanting to call out a hate crime when it clearly was not. It also really does infringe on your right to free speech by trying to shut down unpopular opinions. Even if some peoples opinions or views of other races, genders, etc. may not be ethical or right they should still be allowed to express it. Finally this hate crimes can be discriminatory and not treat everyone equally as was seen in the case of police officers with people denying it should be a hate crime when a whole lot of evidence shows it should be considered one. It also does not take into account that not just minority groups can be victims of hate crimes. Which shows it is a very unfair law and does not treat all people equal. In conclusion hate crimes law should not be as strict because not only are they not fair to all citizens of this country and not everyone is treated equal under that law but it also infringes on people’s first amendment right to free speech by trying to silence unpopular opinions, it should also be reviewed more closely so not everything is considered a hate crime when a crime is committed. Although hate crime laws can be good until it completely fair and equal to all citizens and stops infringing on first amendment rights, they should not be very important in a court of law.