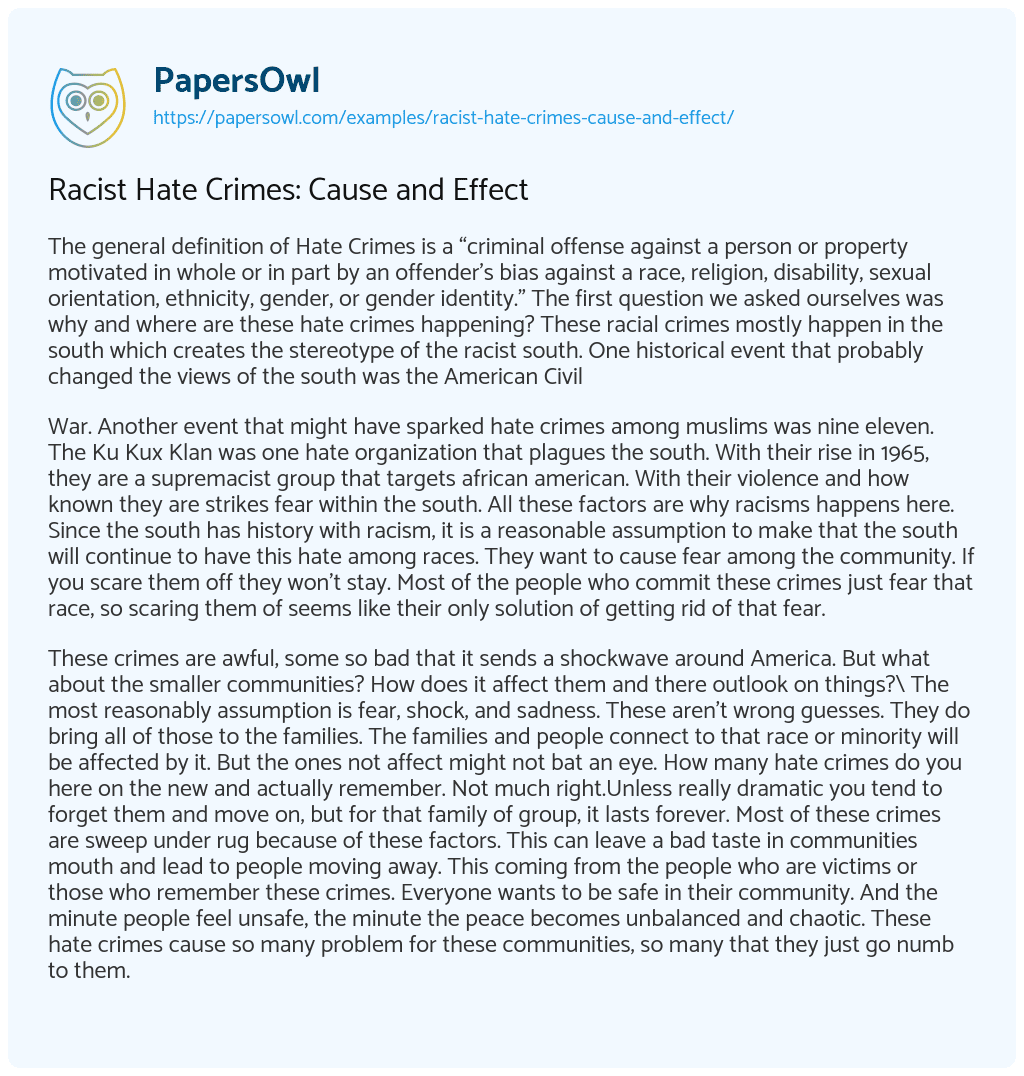 The general definition of Hate Crimes is a “criminal offense against a person or property motivated in whole or in part by an offender’s bias against a race, religion, disability, sexual orientation, ethnicity, gender, or gender identity.” The first question we asked ourselves was why and where are these hate crimes happening? These racial crimes mostly happen in the south which creates the stereotype of the racist south. One historical event that probably changed the views of the south was the American Civil

War. Another event that might have sparked hate crimes among muslims was nine eleven. The Ku Kux Klan was one hate organization that plagues the south. With their rise in 1965, they are a supremacist group that targets african american. With their violence and how known they are strikes fear within the south. All these factors are why racisms happens here. Since the south has history with racism, it is a reasonable assumption to make that the south will continue to have this hate among races. They want to cause fear among the community. If you scare them off they won’t stay. Most of the people who commit these crimes just fear that race, so scaring them of seems like their only solution of getting rid of that fear.

These crimes are awful, some so bad that it sends a shockwave around America. But what about the smaller communities? How does it affect them and there outlook on things?\ The most reasonably assumption is fear, shock, and sadness. These aren’t wrong guesses. They do bring all of those to the families. The families and people connect to that race or minority will be affected by it. But the ones not affect might not bat an eye. How many hate crimes do you here on the new and actually remember. Not much right.Unless really dramatic you tend to forget them and move on, but for that family of group, it lasts forever. Most of these crimes are sweep under rug because of these factors. This can leave a bad taste in communities mouth and lead to people moving away. This coming from the people who are victims or those who remember these crimes. Everyone wants to be safe in their community. And the minute people feel unsafe, the minute the peace becomes unbalanced and chaotic. These hate crimes cause so many problem for these communities, so many that they just go numb to them.

Racist Hate Crimes: Cause and Effect. (2021, Jul 10). Retrieved from https://papersowl.com/examples/racist-hate-crimes-cause-and-effect/