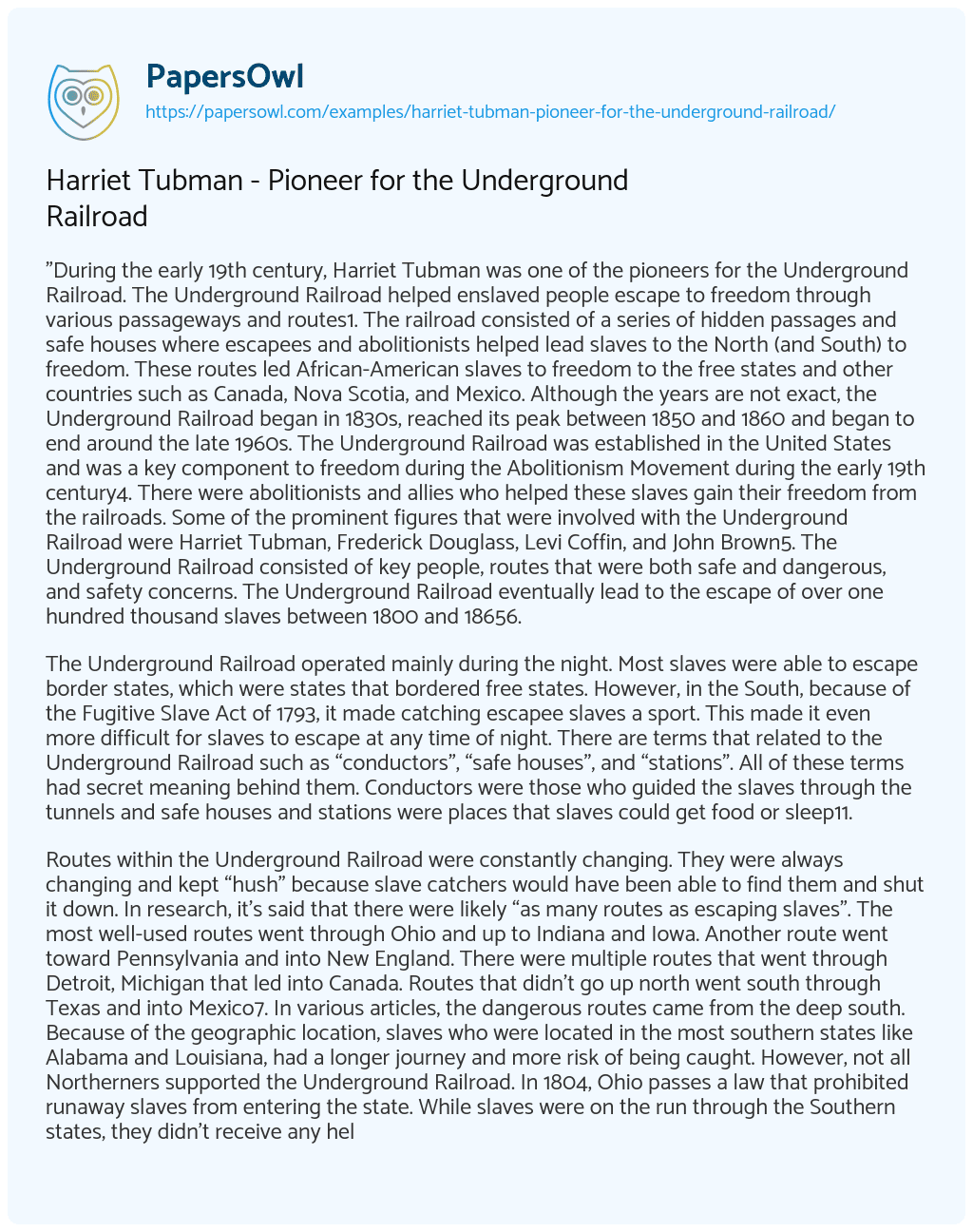 The Underground Railroad operated mainly during the night. Most slaves were able to escape border states, which were states that bordered free states. However, in the South, because of the Fugitive Slave Act of 1793, it made catching escapee slaves a sport. This made it even more difficult for slaves to escape at any time of night. There are terms that related to the Underground Railroad such as “conductors”, “safe houses”, and “stations”. All of these terms had secret meaning behind them. Conductors were those who guided the slaves through the tunnels and safe houses and stations were places that slaves could get food or sleep11.

Routes within the Underground Railroad were constantly changing. They were always changing and kept “hush” because slave catchers would have been able to find them and shut it down. In research, it’s said that there were likely “as many routes as escaping slaves”. The most well-used routes went through Ohio and up to Indiana and Iowa. Another route went toward Pennsylvania and into New England. There were multiple routes that went through Detroit, Michigan that led into Canada. Routes that didn’t go up north went south through Texas and into Mexico7. In various articles, the dangerous routes came from the deep south. Because of the geographic location, slaves who were located in the most southern states like Alabama and Louisiana, had a longer journey and more risk of being caught. However, not all Northerners supported the Underground Railroad. In 1804, Ohio passes a law that prohibited runaway slaves from entering the state. While slaves were on the run through the Southern states, they didn’t receive any help until they reached a free state. Slaves who were in the deeper south in states like Alabama and Louisiana had a more difficult journey to freedom9. Slaves who successfully escaped were more likely from states closer to free states like Kentucky and Virginia. Those slaves (from Kentucky and Virginia) had a much better change at making it to a free state than slaves from the deep Southern states. While many people believe that slaves only traveled up north toward the northern states, some slaves escaped to Florida, isolated communities in the south, and Mexico. During this time, Mexico didn’t return fugitive slaves, which fortunately helped many slaves that escaped from Texas and “researchers estimate 5000 to 10000 people escaped from bondage into Mexico”. There were different routes and ways that slaves could get into Mexico7. Stories were told that some went by foot, rode horses, and snuck onto ferries boats. Not all of the slaves that escaped to Mexico were from Texas. Research has shown that slaves from North Carolina, Mississippi, Louisiana and Alabama escaped to Mexico when Canada felt too far7.

Harriet Tubman was a “conductor” during this time. She was born as a slave and a different name (now “Harriet”) after she escaped from her slaveowner in Maryland. Some people never want to return to where they came from, but Harriet made multiple trips back to the same plantation that she escaped to help other escape as well. During her time as a conductor, Harriet was said to have helped over 300 slaves escape from there slaveowners. Harriet took escapes up to Maryland and into Canada. Frederick Douglass was also a former slave like how Harriet Tubman was. He was not a conductor though, but he had a safe house. He hid slaves in his home and helped over 400 slaves escape to Canada. Levi Coffin was one of the youngest Quakers to help slaves. He started helping slaves around 18135. He later referred to himself as the “Father of the Underground Railroad”. Coffin helped slaves escape where ever he lived, and those places included North Carolina, Indiana and Ohio. John Brown was an abolitionist and was also a conductor. He established the League of Gildeadites which was an organization that worked to protect slaves who have escaped from people trying to recapture them. Brown met Frederick Douglass at a meeting in Massachusetts and that was where he first told Douglass about his plan to free slaves9. However, Brown did not become a major figure in the Underground Railroad until after 1855. Brown was said to be a violent leader of antislavery guerillas. He led attacks and murders of proslavery towns. Eventually, Brown was captured and convicted of treason in Virginia. He was later hung in 1959. These leaders of the Underground Railroad played a major role in helping slaves escape for their freedom. These people, however, were not the only individuals who made the Underground Railroad possible; most people who heled escaping slaves were free blacks or escaped slaves as well as white abolitionists.

“Philadelphia and the surround regions played a prominent role in the Underground Railroad.” The Underground Railroad was used as early as the late 1780s in Pennsylvania. Soon after, it expanded into Philadelphia. There were tense borders that led to rifts between South and North border states like Maryland, Pennsylvania, and New Jersey over slavery. Two incidents that led to violence and allies fought hard to stop the slave catchers. In this incident, allies were able to save a family from a slave catcher in Philadelphia, but the allies that participated in the rescue were convicted. A spark that continued the flames was when a Maryland slaveowner was killed by slaves trying to defend themselves against recapture. William Still and his wife Letitia were major influences in the Underground Railroad. Still held a chair position of the Vigilance Committee and Letitia offered their home and sewed clothing to raise money for the Underground Railroad.

A famous escapee during the Underground Railroad was Jane Johnson. She was rescued along with her sons by Still and Passmore Williamson, an abolitionist. Jane Johnson and her two sons were owned by John Wheeler10. Wheeler brought Johnson and her sons with him to South Africa and he wasn’t worried that they’d plan on escaping. Still and Passmore Williamson boarded the same ferry that Wheeler was on in Philadelphia and helped her and her sons escape. At that time, the law in Philadelphia was that any enslaved person who was brought into the state was considered free if they wanted to be. Williamson told Johnson that she and her boys were free and that they were free to leave4. Wheeler claimed that Williamson was an abductor through Judge John Kane. But Wheeler did not comply and stated that he “had no knowledge of Johnson’s whereabouts. Williamson was at the Moyamensing Prison in Philadelphia for three months. He received daily support letters and had visitors such as Frederick Douglass and Harriet Tubman6. Williamson was sent to prison in July and was released in November whenever the Wheeler withdrew the complaint12.

In the journal Article, “Underground Railroad in Philadelphia, 1830-1860”, it talks about the major role that the city of Philadelphia and how its residents played a major role in the Underground Railroad. Philadelphia’s Patriots included Robert Purvis, William Still, and Henry Box Brown8. Robert Purvis had a “secret room” in his house that had a trap door where escaping slaves could enter through. He was active in the Underground Railroad, antislavery and civil rights. Purvis, along with other Philadelphians, formed a vigilance committee. This committee was officially called the “Vigilant Association of Philadelphia” which helped colored people in distress. After the committee collapsed and a riot near his home happened, he moved to a suburb of Philadelphia. William Still said, “it was no holiday task to escape the vigilance of Virginia slave hunters, or the wrath of an enraged master for committing the unpardonable sin of attempting to escape to a land of liberty”. Still came to Philadelphia to work as a clear and janitor. He came to Philadelphia already with the thought of helping slaves on his mind. He helped house and keep secret records on all of the escaping slaves so that they could be reunited with their families later on. Still risked his life to save the lives of slaves. He knew what the repercussions were on aiding slaves, but he still showed courage in doing it. Henry Box Brown was a slave who plot his escape by mailing himself to Philadelphia. He built an elaborate box that was able to fit himself in there with instructions like “this side up”. Whenever he arrived in Philadelphia, he was “wet and very tired, but joyous”. He didn’t stay in Philadelphia for long because he left for Boston a few days after he arrived in Philadelphia8.

The Underground Railroad was built on volunteers that aided runaway slaves. Still moved to Philadelphia and joined the largest and wealthiest northern free black community12. There were a variety of host churches, organizations, and mutual aid societies. Through these churches and organizations, many connections and relationships were made. However, free blacks still faced racism in the American society, but there was a supportive community of Quakers and other white sympathizers. These people founded organizations named the Pennsylvania Abolition Society and the Pennsylvania Anti-Slavery Society to fight against bondage and give aid to blacks8.