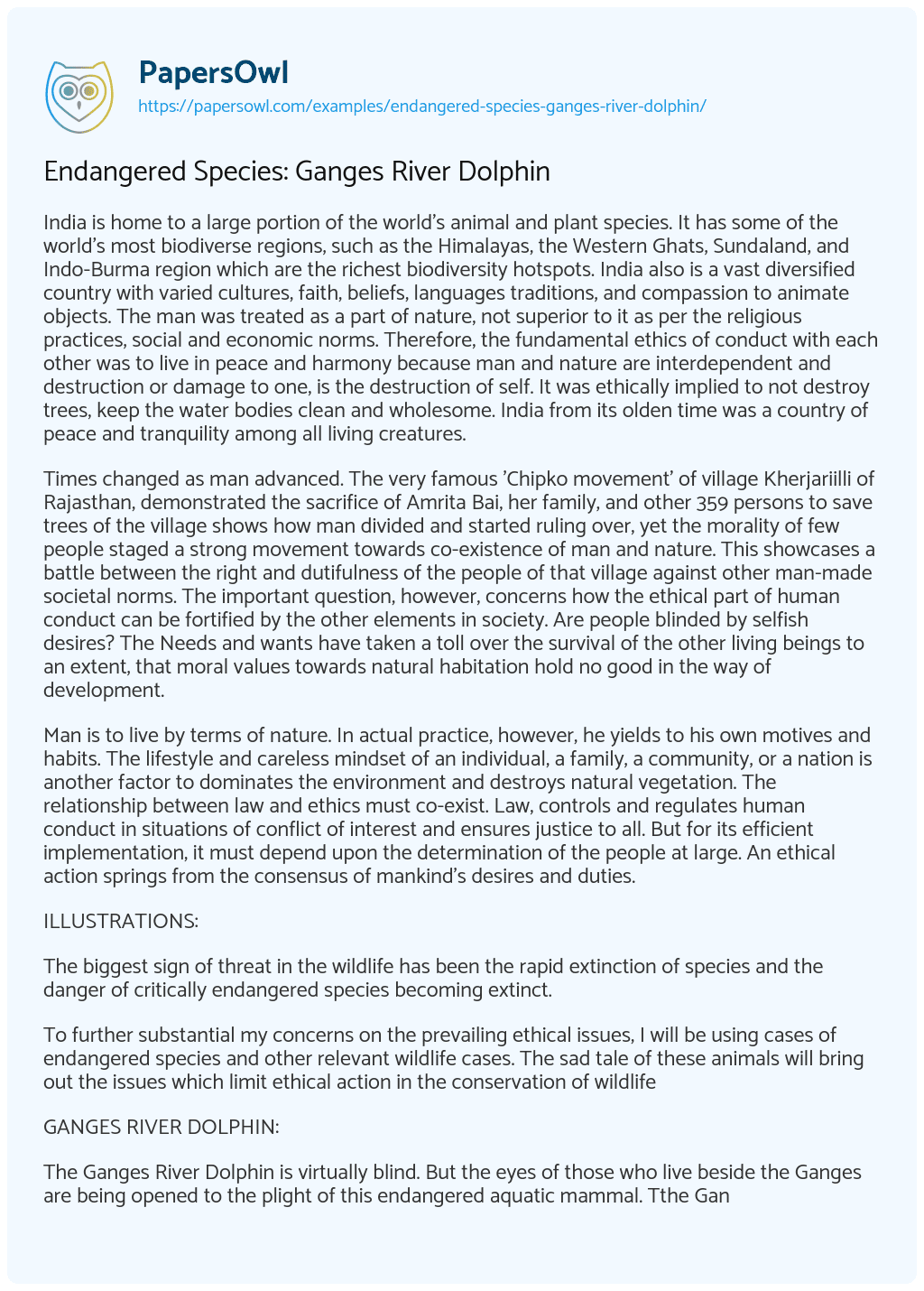 India is home to a large portion of the world’s animal and plant species. It has some of the world’s most biodiverse regions, such as the Himalayas, the Western Ghats, Sundaland, and Indo-Burma region which are the richest biodiversity hotspots. India also is a vast diversified country with varied cultures, faith, beliefs, languages traditions, and compassion to animate objects. The man was treated as a part of nature, not superior to it as per the religious practices, social and economic norms. Therefore, the fundamental ethics of conduct with each other was to live in peace and harmony because man and nature are interdependent and destruction or damage to one, is the destruction of self. It was ethically implied to not destroy trees, keep the water bodies clean and wholesome. India from its olden time was a country of peace and tranquility among all living creatures.

Times changed as man advanced. The very famous ‘Chipko movement’ of village Kherjariilli of Rajasthan, demonstrated the sacrifice of Amrita Bai, her family, and other 359 persons to save trees of the village shows how man divided and started ruling over, yet the morality of few people staged a strong movement towards co-existence of man and nature. This showcases a battle between the right and dutifulness of the people of that village against other man-made societal norms. The important question, however, concerns how the ethical part of human conduct can be fortified by the other elements in society. Are people blinded by selfish desires? The Needs and wants have taken a toll over the survival of the other living beings to an extent, that moral values towards natural habitation hold no good in the way of development.

Man is to live by terms of nature. In actual practice, however, he yields to his own motives and habits. The lifestyle and careless mindset of an individual, a family, a community, or a nation is another factor to dominates the environment and destroys natural vegetation. The relationship between law and ethics must co-exist. Law, controls and regulates human conduct in situations of conflict of interest and ensures justice to all. But for its efficient implementation, it must depend upon the determination of the people at large. An ethical action springs from the consensus of mankind’s desires and duties.

The biggest sign of threat in the wildlife has been the rapid extinction of species and the danger of critically endangered species becoming extinct.

To further substantial my concerns on the prevailing ethical issues, I will be using cases of endangered species and other relevant wildlife cases. The sad tale of these animals will bring out the issues which limit ethical action in the conservation of wildlife

The Ganges River Dolphin is virtually blind. But the eyes of those who live beside the Ganges are being opened to the plight of this endangered aquatic mammal. Tthe Ganges River dolphin is facing a serious threat from humans that could lead to its extinction. Unfortunately, the dolphin inhabits one of the world’s densely populated area whose need for sufficient unpolluted water and food conflicts with the needs of human neighbors.

Threats: The Ganges water quality is declining. The dangerous water pollutants are leaked by oil refineries, chemical factories, and other industrial plants along with untreated sewage into the Ganges and its tributaries. Pollution has also reduced the number of fish, upon which the dolphin prey. Noise from increasing numbers of large ships, such as oil tankers, interferes severely with its echolocation system. Despite legal protection, some dolphins are still caught for food, even more, are killed for oil which is used by fishermen to attract fish. Others become entangled in fishing nets and perish. Their annual migration is also highly affected by the construction of dams. All these morally unethical act and excessive unchangeable religious beliefs, of dumping the idols, bathing, etc., has worsened the plight of this poor mammal.

Protected- but not safe: The Ganges River Dolphin has been legally protected in India since 1972, yet its population continues to decline by 10 percent. The dolphin’s problems have been known for some time, but attempts to help have so far been ineffective. For instance, a 1986 Indian government initiative to clean up the river has had little impact- despite the fact that it would make a difference to people’s lives and that of the dolphins.