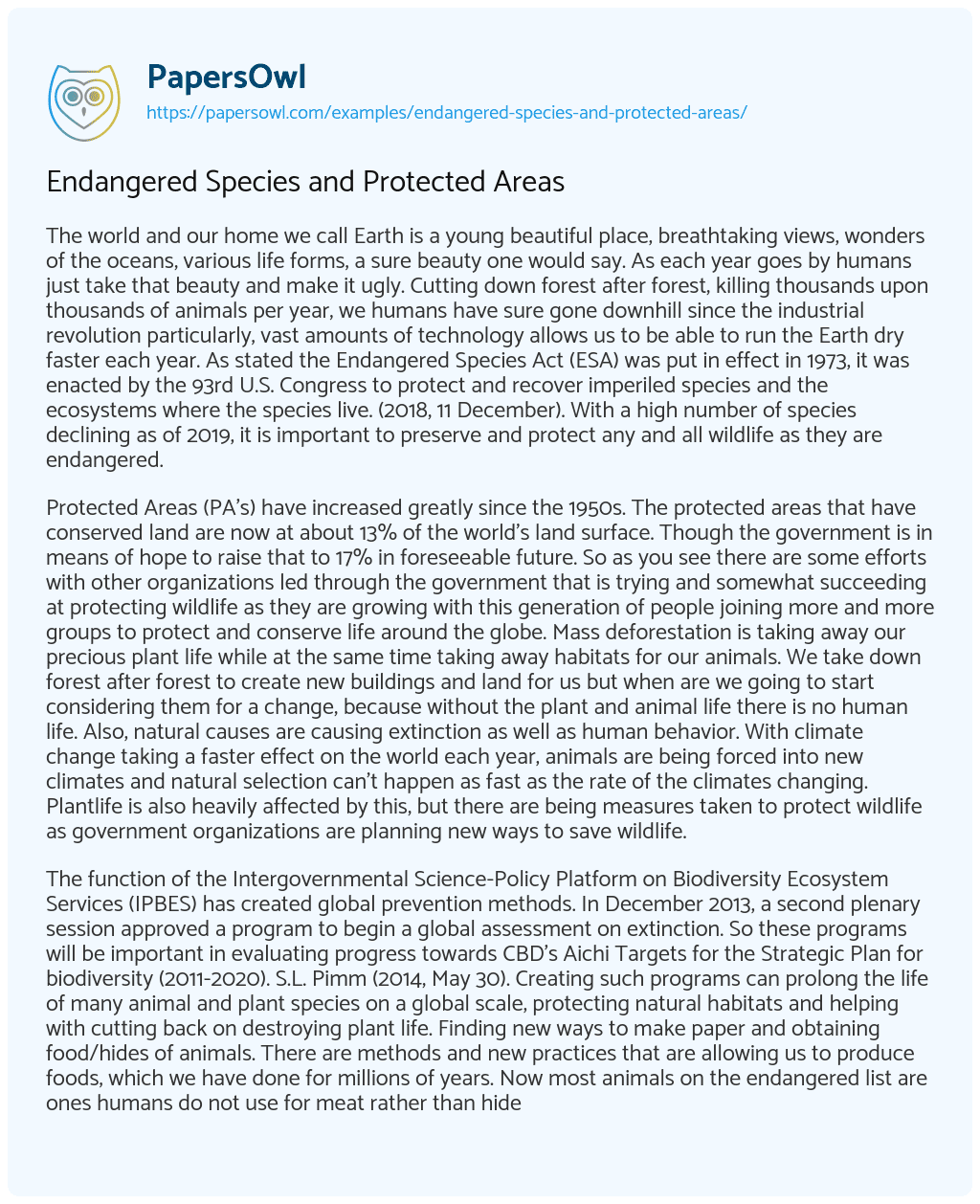 The world and our home we call Earth is a young beautiful place, breathtaking views, wonders of the oceans, various life forms, a sure beauty one would say. As each year goes by humans just take that beauty and make it ugly. Cutting down forest after forest, killing thousands upon thousands of animals per year, we humans have sure gone downhill since the industrial revolution particularly, vast amounts of technology allows us to be able to run the Earth dry faster each year. As stated the Endangered Species Act (ESA) was put in effect in 1973, it was enacted by the 93rd U.S. Congress to protect and recover imperiled species and the ecosystems where the species live. (2018, 11 December). With a high number of species declining as of 2019, it is important to preserve and protect any and all wildlife as they are endangered.

Protected Areas (PA’s) have increased greatly since the 1950s. The protected areas that have conserved land are now at about 13% of the world’s land surface. Though the government is in means of hope to raise that to 17% in foreseeable future. So as you see there are some efforts with other organizations led through the government that is trying and somewhat succeeding at protecting wildlife as they are growing with this generation of people joining more and more groups to protect and conserve life around the globe. Mass deforestation is taking away our precious plant life while at the same time taking away habitats for our animals. We take down forest after forest to create new buildings and land for us but when are we going to start considering them for a change, because without the plant and animal life there is no human life. Also, natural causes are causing extinction as well as human behavior. With climate change taking a faster effect on the world each year, animals are being forced into new climates and natural selection can’t happen as fast as the rate of the climates changing. Plantlife is also heavily affected by this, but there are being measures taken to protect wildlife as government organizations are planning new ways to save wildlife.

The function of the Intergovernmental Science-Policy Platform on Biodiversity Ecosystem Services (IPBES) has created global prevention methods. In December 2013, a second plenary session approved a program to begin a global assessment on extinction. So these programs will be important in evaluating progress towards CBD’s Aichi Targets for the Strategic Plan for biodiversity (2011-2020). S.L. Pimm (2014, May 30). Creating such programs can prolong the life of many animal and plant species on a global scale, protecting natural habitats and helping with cutting back on destroying plant life. Finding new ways to make paper and obtaining food/hides of animals. There are methods and new practices that are allowing us to produce foods, which we have done for millions of years. Now most animals on the endangered list are ones humans do not use for meat rather than hides, or such as one of the most popular endangered animals, the Asian elephants are killed in great numbers each for their ivory from their tusks. Since 1900, 477 animal species have gone extinct because of our destruction of natural habitats. As our technology grows, the animal kingdom seems to fall because of our destruction. Even with more and more protective procedures happening per year, extinctions are not inevitable. Especially large mammals in Africa, Asia, and South America. Proactive international efforts to increase crop yields, minimize land clearing and habitat fragmentation. Tilman, D (2017, 01 June). Running into the problem with the loss of plant life, many farms are being funded by the government to produce more crops. Along with trying to save vegetation, numerous government and non-government groups are created and funded more as they are having a sort of movement if you will. Many of these groups are planting trees and other various plant life around the country. As trees are planted, 4.2 times more trees are cut down. 7 billion trees are cut down each year and 1.7 billion trees are planted each year. Though that may be a lot of trees planted per year, looking at the math is pretty substantial as billions of more trees are destroyed than saved. We have attempted multiple strategies for climate change and biodiversity, yet many have failed and the inevitability of solving the new challenges to solve the problems facing the loss of ever so important life around the globe. With the vast distributions of wildlife reservoirs around the world, and with the mass majority of life out there, it is hard to save all of them. Mother nature is almost inevitable to win the everlasting battle of the fight of extinction. Whether mother nature plays a large role in the loss of species, in the last hundreds of years humans have caused thousands of extinctions. Applying statistical approaches to extinction data revealed a rate of 100 to 1,000 species lost per million per year, mostly caused by human destruction of natural habitats. Dell’amore, C (2014, 30 May).

The government is creating more measures to prevent the everlasting extinction, there are many problems to run into as the process goes along. Problems include poachers, logging companies, hunting, and vast deforestation. Although we need wood for many materials such as paper, housing, firewood, etc, with technology growing and the knowledge of us, we should have solutions by now, right? Well, it may not look like the government or half the world cares because of our day-to-day destruction of wildlife, more laws are being imposed to prevent the killing of animals and plants. Poaching laws vary from state to state in the United States and in other countries, the prevention is stronger than ever as one of the last White African Rhino was on 24/7 armed guard until its death on May 19, 2018. Invasive alien species are causing major environmental problems in the U.S. and cost them $120 billion per year. There are 50,000 invasive alien species and growing, about 42% of all species on the endangered or threatened list are because of invasive alien species, but many of the IAS are because of humans’ destruction of natural habitats of species around the world. So we as humans continue to grow as a species, therefore we take what it is on the Earth and claim it as our own. It is hard to not destroy as we grow, but the rapid amount we are doing is going to cause problems greater than we thought imaginable. Bumblebees for example are endangered and are not knowingly one of the most important species in the world because of pollination. We grow, we conquer, we discover, but unfortunately, we destroy. We as humans need room to survive as a species, but with new developing technologies and discovering new ways of saving and creating new habitats of animals/plants, so in the years to come with the vast help from the governments around the world, there is the possibility of saving wildlife and help it rise up again as we rise up. We are all family on this Earth, it’s time we start acting like it again.

We Need to Protect Endangered Animals