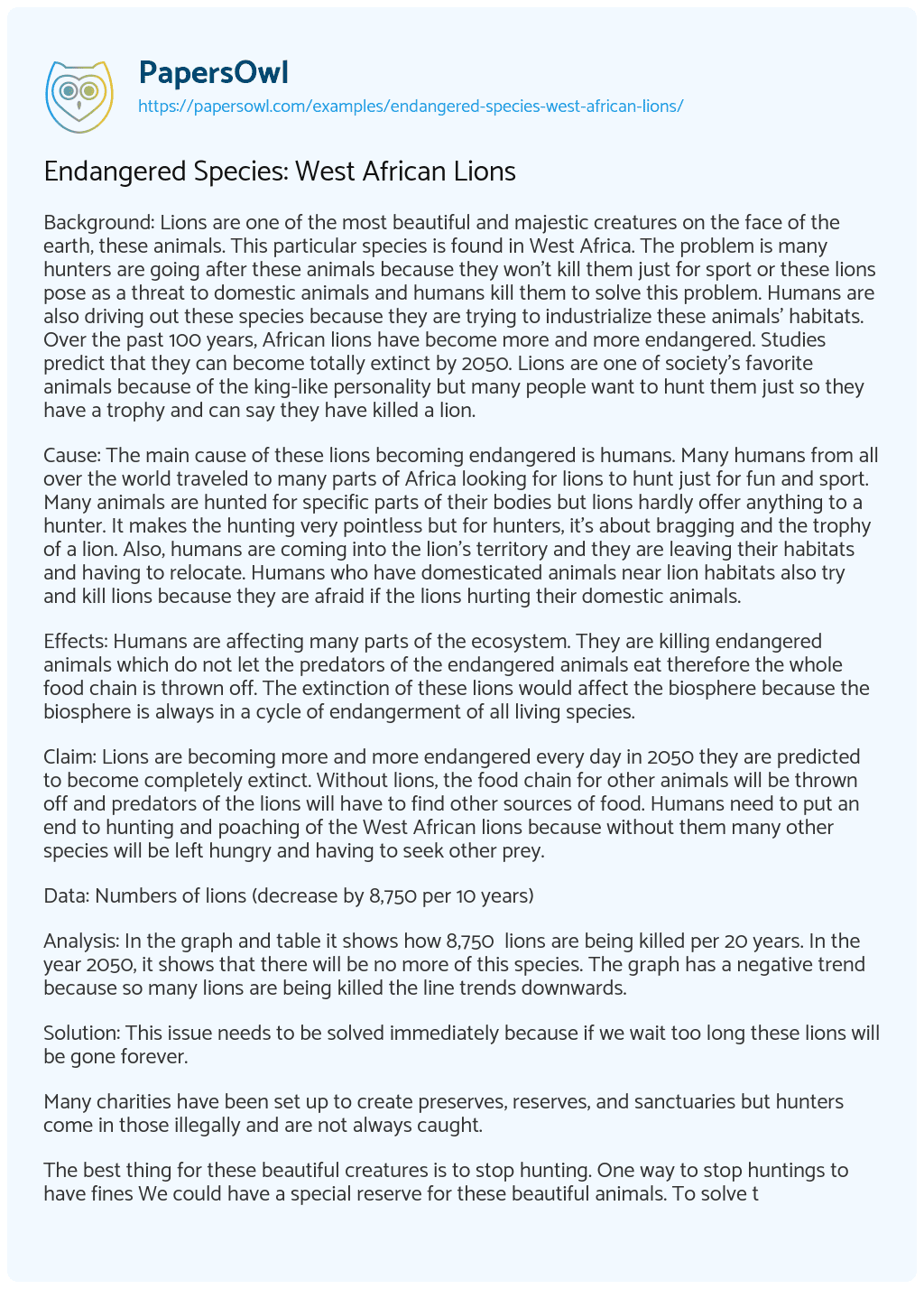 Background: Lions are one of the most beautiful and majestic creatures on the face of the earth, these animals. This particular species is found in West Africa. The problem is many hunters are going after these animals because they won’t kill them just for sport or these lions pose as a threat to domestic animals and humans kill them to solve this problem. Humans are also driving out these species because they are trying to industrialize these animals’ habitats. Over the past 100 years, African lions have become more and more endangered. Studies predict that they can become totally extinct by 2050. Lions are one of society’s favorite animals because of the king-like personality but many people want to hunt them just so they have a trophy and can say they have killed a lion.

Cause: The main cause of these lions becoming endangered is humans. Many humans from all over the world traveled to many parts of Africa looking for lions to hunt just for fun and sport. Many animals are hunted for specific parts of their bodies but lions hardly offer anything to a hunter. It makes the hunting very pointless but for hunters, it’s about bragging and the trophy of a lion. Also, humans are coming into the lion’s territory and they are leaving their habitats and having to relocate. Humans who have domesticated animals near lion habitats also try and kill lions because they are afraid if the lions hurting their domestic animals.

Claim: Lions are becoming more and more endangered every day in 2050 they are predicted to become completely extinct. Without lions, the food chain for other animals will be thrown off and predators of the lions will have to find other sources of food. Humans need to put an end to hunting and poaching of the West African lions because without them many other species will be left hungry and having to seek other prey.

Solution: This issue needs to be solved immediately because if we wait too long these lions will be gone forever.

Many charities have been set up to create preserves, reserves, and sanctuaries but hunters come in those illegally and are not always caught.

We could focus more on animals’ safety and their wellbeing than on the industrialization and the making of new facilities on their habitats.

The only setback to this solution is the cost. With the added people securing the area you would need to pay them and if we wanted to have special fences around the reserve that would be costly. This option is one of the best for the environment because all we are adding is protection for these animals.

All About Wildlife. (2018). ARE LIONS ENDANGERED?. [online] Available at: http://www.allaboutwildlife.com/endangered-species/are-lions-endangered/5825 [Accessed 21 Dec. 2018].