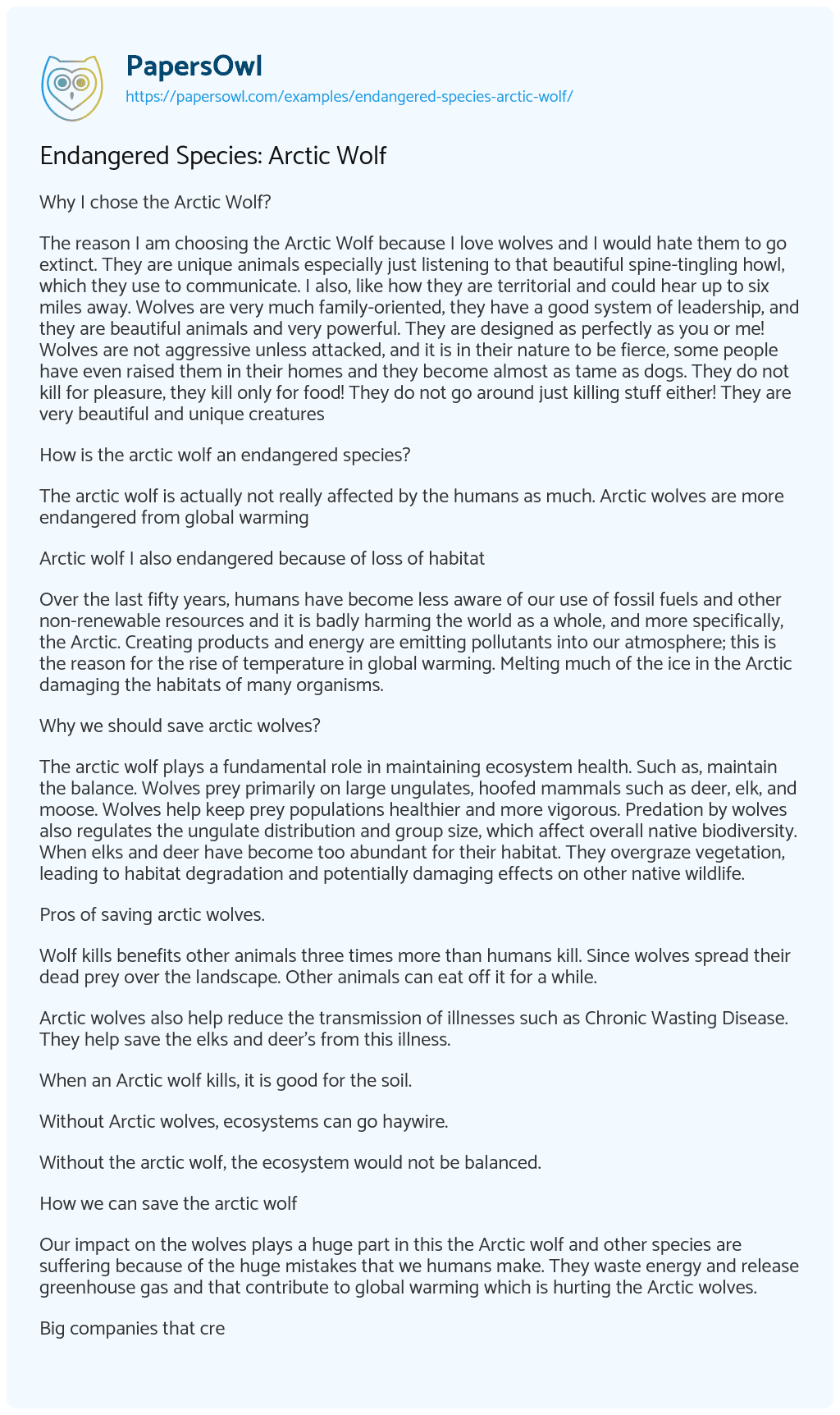 Why I chose the Arctic Wolf?

The reason I am choosing the Arctic Wolf because I love wolves and I would hate them to go extinct. They are unique animals especially just listening to that beautiful spine-tingling howl, which they use to communicate. I also, like how they are territorial and could hear up to six miles away. Wolves are very much family-oriented, they have a good system of leadership, and they are beautiful animals and very powerful. They are designed as perfectly as you or me! Wolves are not aggressive unless attacked, and it is in their nature to be fierce, some people have even raised them in their homes and they become almost as tame as dogs. They do not kill for pleasure, they kill only for food! They do not go around just killing stuff either! They are very beautiful and unique creatures

How is the arctic wolf an endangered species?

The arctic wolf is actually not really affected by the humans as much. Arctic wolves are more endangered from global warming

Arctic wolf I also endangered because of loss of habitat

Over the last fifty years, humans have become less aware of our use of fossil fuels and other non-renewable resources and it is badly harming the world as a whole, and more specifically, the Arctic. Creating products and energy are emitting pollutants into our atmosphere; this is the reason for the rise of temperature in global warming. Melting much of the ice in the Arctic damaging the habitats of many organisms.

Why we should save arctic wolves?

The arctic wolf plays a fundamental role in maintaining ecosystem health. Such as, maintain the balance. Wolves prey primarily on large ungulates, hoofed mammals such as deer, elk, and moose. Wolves help keep prey populations healthier and more vigorous. Predation by wolves also regulates the ungulate distribution and group size, which affect overall native biodiversity. When elks and deer have become too abundant for their habitat. They overgraze vegetation, leading to habitat degradation and potentially damaging effects on other native wildlife.

Wolf kills benefits other animals three times more than humans kill. Since wolves spread their dead prey over the landscape. Other animals can eat off it for a while.

Arctic wolves also help reduce the transmission of illnesses such as Chronic Wasting Disease. They help save the elks and deer’s from this illness.

When an Arctic wolf kills, it is good for the soil.

Without the arctic wolf, the ecosystem would not be balanced.

How we can save the arctic wolf

Our impact on the wolves plays a huge part in this the Arctic wolf and other species are suffering because of the huge mistakes that we humans make. They waste energy and release greenhouse gas and that contribute to global warming which is hurting the Arctic wolves.

Big companies that create mines road and pipelines and they are also hurting the arctic wolves, we cannot really do anything as individuals. However, we can work with the companies who are trying to stop them. With all the pipelines and roads, being created it pushes the wolves away because they rather are alone away from everyone and that is pushing them away from their prey and leaving them to starve and become an endangered species. We could boycott the workers from building because when they are building the mines that are coal and the coal is just adding on to the global warming.

We can also try to send people to their location and try to relocate them to a different area because of the weather.

We can save the Arctic Wolf by donating money and funding projects that clean up the airborne pollution, we humans caused pollution, which is destroying the Ozone layer, if the Ozone layer is destroyed; the world would reach temperatures that are unsustainable for life.

What would happen if they went extinct?

If the wolves became extinct, a whole chain reaction of things would happen, which might be catastrophic. Wolves are predators to smaller animals, and when the wolves prey on them, it helps keep their populations down.

The main thing that would happen is that the deer would overpopulate, which is not a good thing. If the deer become overpopulated, there would be more game for predators and hunters, but when they overpopulate this becomes a hazard to drivers, possibly causing an increase in car crashes and fatalities.

Companies that are against global warming and making a difference

Arctic wolves are well adapted to icy conditions. White fur allows them to blend into snowy surroundings. To help reduce heat loss their ears are small and rounded, the muzzle is short, and the fur is dense.

Facts About the arctic wolf

The Arctic wolf is a species of wolf, which is located in Upper Canada, Alaska, and Greenland.

Arctic wolves have white fur year-round, which allows them to blend into their snowy surroundings. Their coat is long and silky with soft, thick underfur. Which shed in the spring and the coat becomes shorter and less dense? The lengthy tail is bushy, and the legs are long giving it a lanky appearance. The feet are large and digitate with non-retractable claws. The forefeet have five toes and the hind feet have four. The skull is broad and the face and ears are well defined. Ears are slightly rounded and the face is less pointed than other species of wolf. They are predatory carnivores. They hunt in packs for caribou and muskoxen. They also consume Arctic hares, ptarmigan, lemmings, and other small animals including nesting birds.

I hope that arctic wolves will not go extinct, and in fact, I hope that they are saved from extinction because there are many of companies that I have mentioned that are doing a great job helping arctic wolves right now.