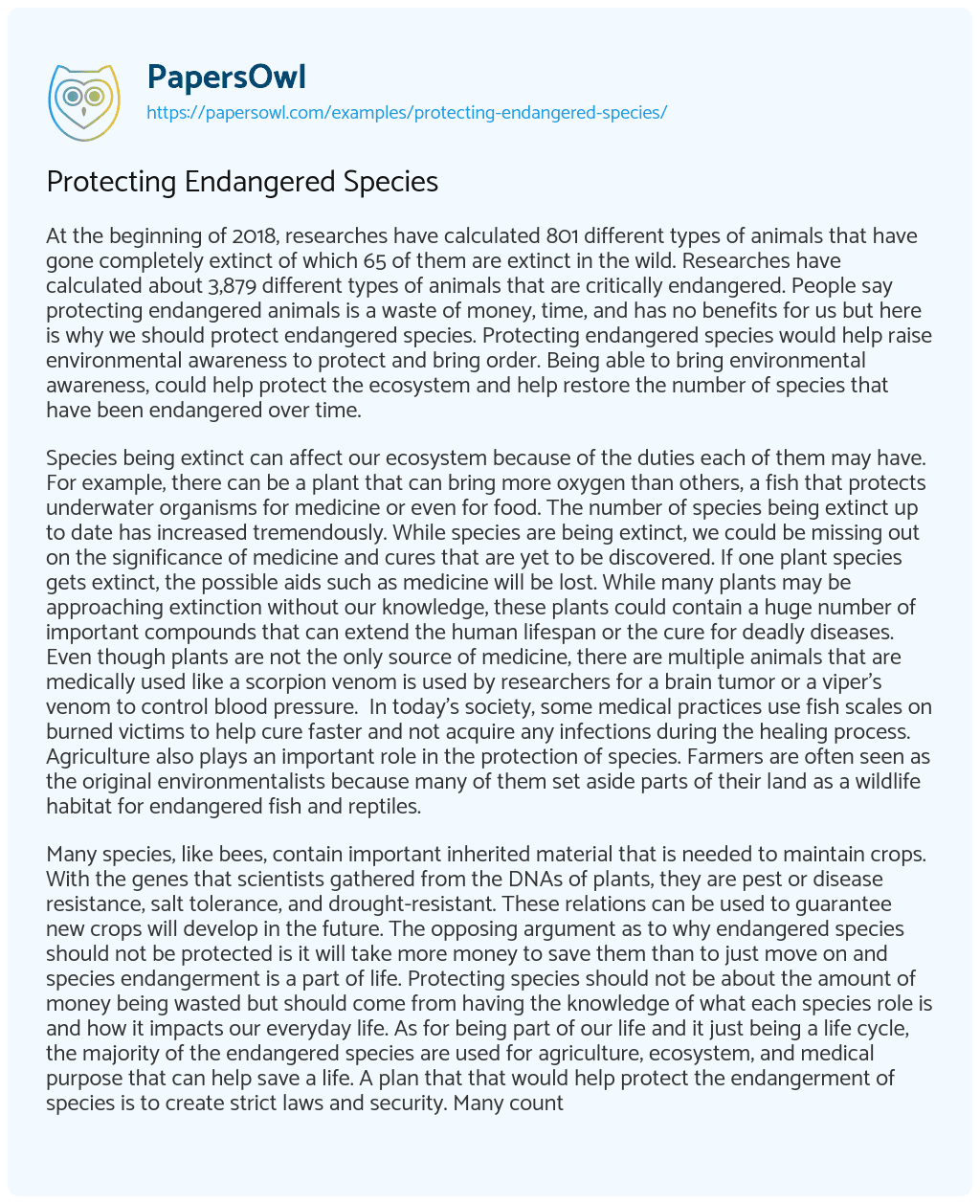 At the beginning of 2018, researches have calculated 801 different types of animals that have gone completely extinct of which 65 of them are extinct in the wild. Researches have calculated about 3,879 different types of animals that are critically endangered. People say protecting endangered animals is a waste of money, time, and has no benefits for us but here is why we should protect endangered species. Protecting endangered species would help raise environmental awareness to protect and bring order. Being able to bring environmental awareness, could help protect the ecosystem and help restore the number of species that have been endangered over time.

Species being extinct can affect our ecosystem because of the duties each of them may have. For example, there can be a plant that can bring more oxygen than others, a fish that protects underwater organisms for medicine or even for food. The number of species being extinct up to date has increased tremendously. While species are being extinct, we could be missing out on the significance of medicine and cures that are yet to be discovered. If one plant species gets extinct, the possible aids such as medicine will be lost. While many plants may be approaching extinction without our knowledge, these plants could contain a huge number of important compounds that can extend the human lifespan or the cure for deadly diseases. Even though plants are not the only source of medicine, there are multiple animals that are medically used like a scorpion venom is used by researchers for a brain tumor or a viper’s venom to control blood pressure.  In today’s society, some medical practices use fish scales on burned victims to help cure faster and not acquire any infections during the healing process. Agriculture also plays an important role in the protection of species. Farmers are often seen as the original environmentalists because many of them set aside parts of their land as a wildlife habitat for endangered fish and reptiles.

Many species, like bees, contain important inherited material that is needed to maintain crops. With the genes that scientists gathered from the DNAs of plants, they are pest or disease resistance, salt tolerance, and drought-resistant. These relations can be used to guarantee new crops will develop in the future. The opposing argument as to why endangered species should not be protected is it will take more money to save them than to just move on and species endangerment is a part of life. Protecting species should not be about the amount of money being wasted but should come from having the knowledge of what each species role is and how it impacts our everyday life. As for being part of our life and it just being a life cycle, the majority of the endangered species are used for agriculture, ecosystem, and medical purpose that can help save a life. A plan that that would help protect the endangerment of species is to create strict laws and security. Many countries have laws but a lot of them have been broken because they lack enforcement. Researches have calculated about 3,879 different types of animal’s that are critically endangered while people say protecting endangered animals is a waste of money, time, and have no benefits for us. Protecting these species is beneficial to us for medical purposes, agriculture, which majority of our food comes from farms that are needing support from species and evolving the world.

We Need to Protect Endangered Animals