Diabetes Type One in the Pediatric Patient 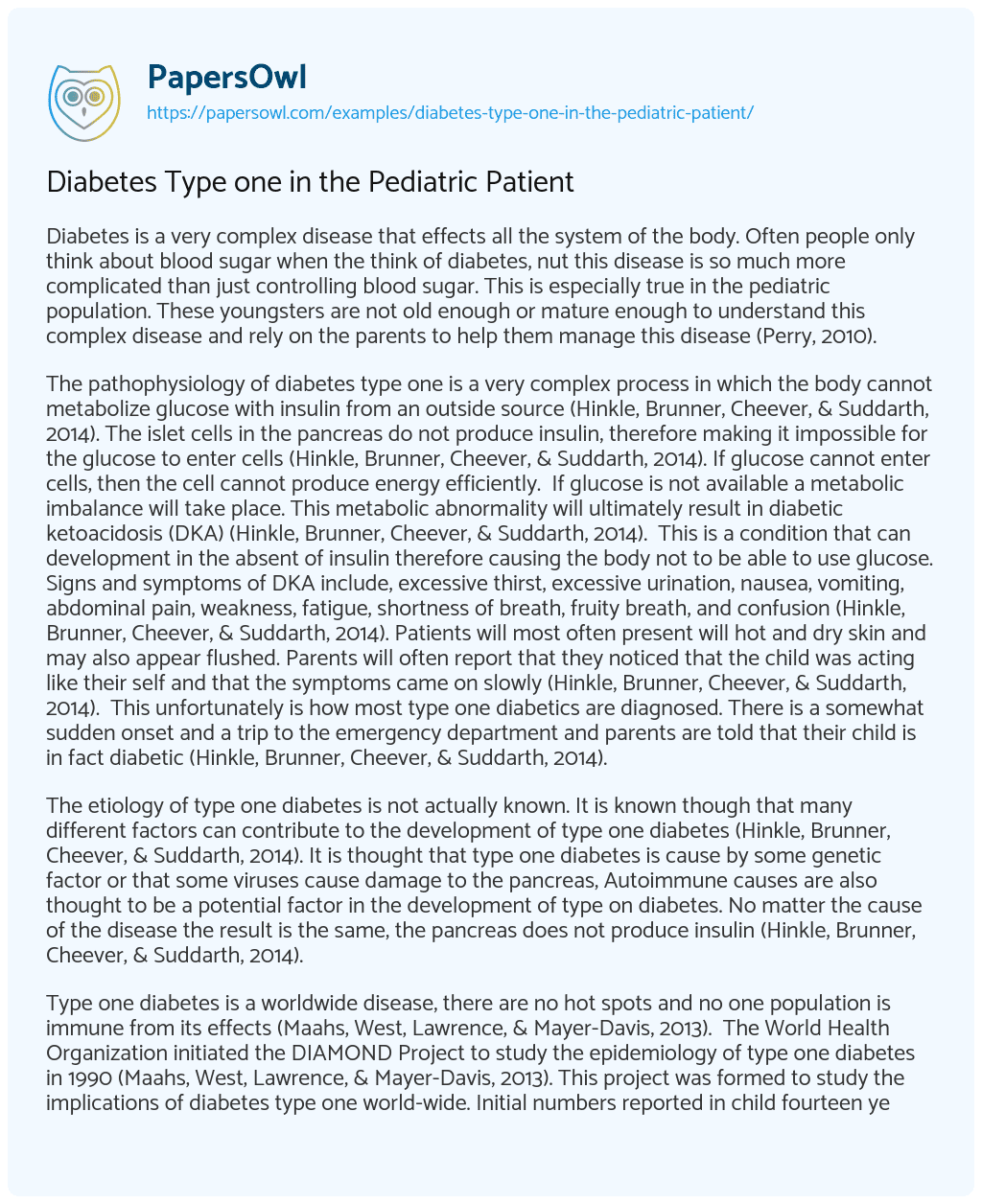 Diabetes is a very complex disease that effects all the system of the body. Often people only think about blood sugar when the think of diabetes, nut this disease is so much more complicated than just controlling blood sugar. This is especially true in the pediatric population. These youngsters are not old enough or mature enough to understand this complex disease and rely on the parents to help them manage this disease (Perry, 2010).

The etiology of type one diabetes is not actually known. It is known though that many different factors can contribute to the development of type one diabetes (Hinkle, Brunner, Cheever, & Suddarth, 2014). It is thought that type one diabetes is cause by some genetic factor or that some viruses cause damage to the pancreas, Autoimmune causes are also thought to be a potential factor in the development of type on diabetes. No matter the cause of the disease the result is the same, the pancreas does not produce insulin (Hinkle, Brunner, Cheever, & Suddarth, 2014).

Management of type one diabetes in children can be a very challenging endeavor, especially in younger children as rely heavily on the help of other to help them manage their disease. Medicine that is utilized for type one diabetic is insulin. There are many types of insulins that can be utilized for the management of type one diabetes (Perry, 2010). Rapid, short, intermediate, and long acting insulins are all medications that can be utilized for the management of blood sugar. (Perry, 2010).  Long acting insulins, such as Lantus or Levemir are given usually one a day but in some case can be given twice daily. These insulins mimic the bodies natural insulin production more than other type of insulin (Perry, 2010).   These insulins have not peak and have a duration of about twenty-four hours. Rapid actin insulting is used for before meals to help keep blood glucose levels from rising after food is consumed. Examples of rapid acting insulins are Humalog and Novolog (Perry, 2010).   This medication is typically used on a sliding scale basis. These can also be used in an insulin pump. An insulin pump is a device that delivers insulin via a small canula type device that is implant into the skin and stays in plane via an adhesive (Perry, 2010).   These are typical changed every 24-72 hours.  Intermediate insulin is another tool that can be used to help regulate blood glucose levels. These medications are typically given twice daily, one dose before breakfast and one dose before dinner. Examples of this would be NPH insulin (Perry, 2010).

Nursing management of diabetes type one can be challenging, especially if the patient is not compliant with diet and or medication regimens. Education of the patient, and in the pediatric population the parents is key to improving outcomes for the patient. For example, and eight-year-old is not capable of handling these on their own. The parents and family must be involved to make the treatment and management of the disease successful (Lasecki, Olympia, Clark, Jenson, & Heathfield, 2008).  The child will require some guidance and at school, and the school nurse would be an integral part in help the child to succeed (Tolbert, 2009). This would ring especially in the newly diagnosed child. Occupational therapist could also help in the transitioning of a child’s lifestyle after a diagnosis. Kids that go a camp that is especially designed for kids with diabetes have been shown to be more successful in treatment and lead happy healthier lives (Cheung, Cureton, & Canham, 2006).

Dietic and nutrition counseling would be especial necessary to the success of the treatment and a positive patient outcome.

Health promotion activities and education needs, and children have diabetes is very complex. Education concerning insulin administration, regular exercise, consistent meal times, and what to do when the child is ill (Perry, 2010). Consult to outpatient diabetes education classes in newly diagnosed patients will help the child and family to be successful in the management of type one diabetes (Tolbert, 2009). The nurse at the child school can also help the child transition to a life with diabetes in the newly diagnosed, or even a child who has had this disease for some time (Tolbert, 2009). The child’s pediatrician is a great resource to assist with this disease if there is no endocrinologist available to the child because of geographic location or financial limitations. More specifically the child and the parent need to be taught how check the child’s glucose level using a finger stick (Perry, 2010). Insulin administration education should be broken down in to very simple explanations (Perry, 2010). Demonstrating how to inject into an orange is an effective way to teach the child and parents alike. Healthy meal planning and consistency of meals and carbohydrate intake are vital to managing glucose (Perry, 2010). Additionally, education the family on how to manage sick days is very important since this is when a lot of diabetics run into trouble (Perry, 2010).

Diabetes Type one in the Pediatric Patient. (2019, Apr 08). Retrieved from https://papersowl.com/examples/diabetes-type-one-in-the-pediatric-patient/