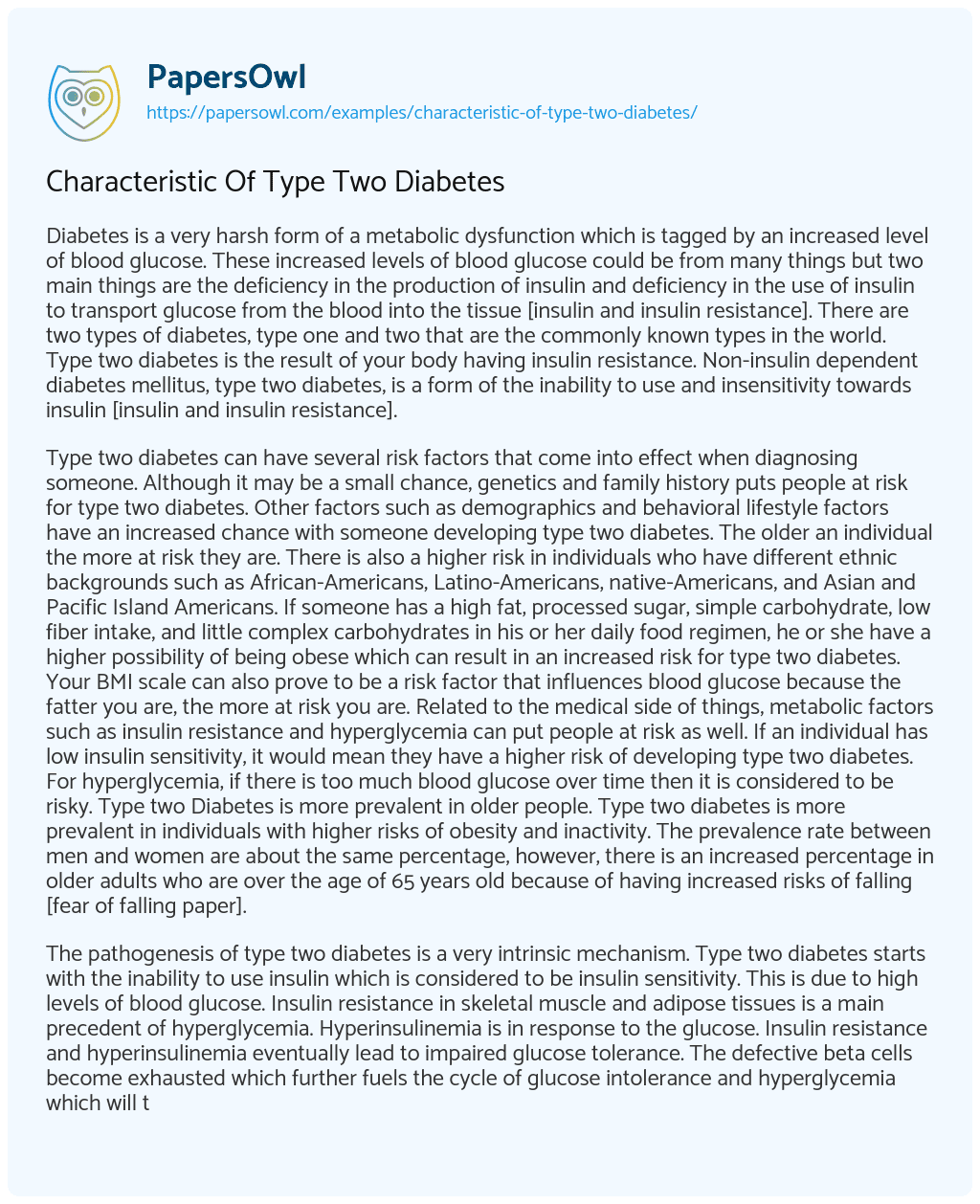 Diabetes is a very harsh form of a metabolic dysfunction which is tagged by an increased level of blood glucose. These increased levels of blood glucose could be from many things but two main things are the deficiency in the production of insulin and deficiency in the use of insulin to transport glucose from the blood into the tissue [insulin and insulin resistance]. There are two types of diabetes, type one and two that are the commonly known types in the world. Type two diabetes is the result of your body having insulin resistance. Non-insulin dependent diabetes mellitus, type two diabetes, is a form of the inability to use and insensitivity towards insulin [insulin and insulin resistance].

Type two diabetes can have several risk factors that come into effect when diagnosing someone. Although it may be a small chance, genetics and family history puts people at risk for type two diabetes. Other factors such as demographics and behavioral lifestyle factors have an increased chance with someone developing type two diabetes. The older an individual the more at risk they are. There is also a higher risk in individuals who have different ethnic backgrounds such as African-Americans, Latino-Americans, native-Americans, and Asian and Pacific Island Americans. If someone has a high fat, processed sugar, simple carbohydrate, low fiber intake, and little complex carbohydrates in his or her daily food regimen, he or she have a higher possibility of being obese which can result in an increased risk for type two diabetes. Your BMI scale can also prove to be a risk factor that influences blood glucose because the fatter you are, the more at risk you are. Related to the medical side of things, metabolic factors such as insulin resistance and hyperglycemia can put people at risk as well. If an individual has low insulin sensitivity, it would mean they have a higher risk of developing type two diabetes. For hyperglycemia, if there is too much blood glucose over time then it is considered to be risky. Type two Diabetes is more prevalent in older people. Type two diabetes is more prevalent in individuals with higher risks of obesity and inactivity. The prevalence rate between men and women are about the same percentage, however, there is an increased percentage in older adults who are over the age of 65 years old because of having increased risks of falling [fear of falling paper].

The pathogenesis of type two diabetes is a very intrinsic mechanism. Type two diabetes starts with the inability to use insulin which is considered to be insulin sensitivity. This is due to high levels of blood glucose. Insulin resistance in skeletal muscle and adipose tissues is a main precedent of hyperglycemia. Hyperinsulinemia is in response to the glucose. Insulin resistance and hyperinsulinemia eventually lead to impaired glucose tolerance. The defective beta cells become exhausted which further fuels the cycle of glucose intolerance and hyperglycemia which will then lead to type two diabetes [beta cell cite]. A 1998 study in JAMA of 1500 men and women who were aged from 40-69 years found a 2% increase in insulin sensitivity for every 200 kcal/day increase in vigorous and non-vigorous physical activity [cite JAMA research study]. The research study was adjusted to ethnicity, age, sex, alcohol, smoking, fat, and hypertension. Another study from the University of PA looked at 5,900 males over 14 years and found that risk for type two diabetes decreased by 6% for each 500 kcal/week increase in leisure time and physical activity up to 3,500 kcal/week [cite research study here]

There are several complications of type two diabetes including but not limited to a two to four-fold increase in coronary heart disease, hypertension, and strokes. If not taken care of, type two diabetes can cause some serious damage to an individual’s active daily living. Type two diabetes can also cause complications in nervous system damage and is one of the leading causes in adult blindness, end-stage kidney failure, and non-traumatic amputations which are all mainly linked to poor circulation throughout the body.