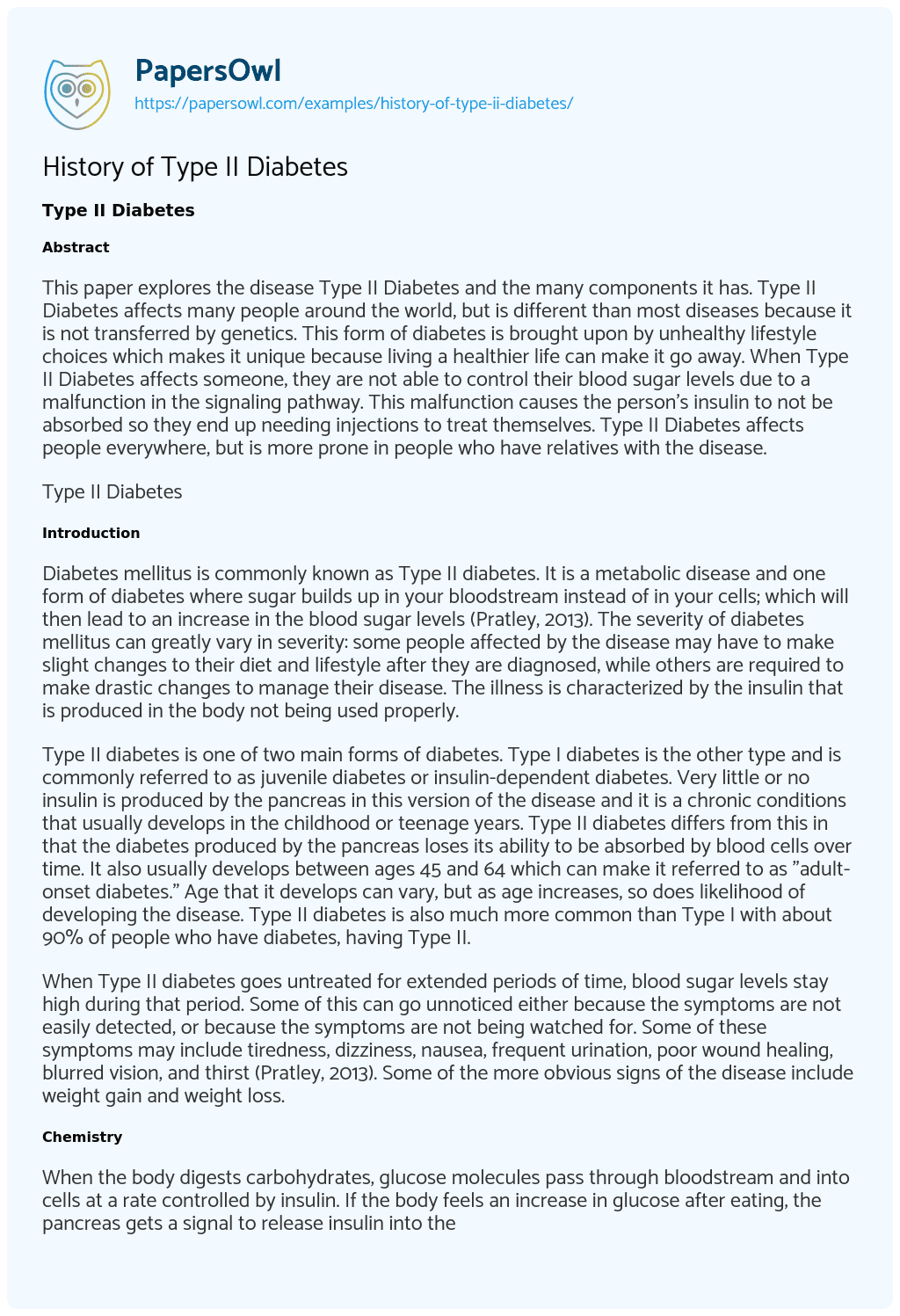 Diabetes mellitus is commonly known as Type II diabetes. It is a metabolic disease and one form of diabetes where sugar builds up in your bloodstream instead of in your cells; which will then lead to an increase in the blood sugar levels (Pratley, 2013). The severity of diabetes mellitus can greatly vary in severity: some people affected by the disease may have to make slight changes to their diet and lifestyle after they are diagnosed, while others are required to make drastic changes to manage their disease. The illness is characterized by the insulin that is produced in the body not being used properly.

Type II diabetes is one of two main forms of diabetes. Type I diabetes is the other type and is commonly referred to as juvenile diabetes or insulin-dependent diabetes. Very little or no insulin is produced by the pancreas in this version of the disease and it is a chronic conditions that usually develops in the childhood or teenage years. Type II diabetes differs from this in that the diabetes produced by the pancreas loses its ability to be absorbed by blood cells over time. It also usually develops between ages 45 and 64 which can make it referred to as “adult-onset diabetes.” Age that it develops can vary, but as age increases, so does likelihood of developing the disease. Type II diabetes is also much more common than Type I with about 90% of people who have diabetes, having Type II.

When Type II diabetes goes untreated for extended periods of time, blood sugar levels stay high during that period. Some of this can go unnoticed either because the symptoms are not easily detected, or because the symptoms are not being watched for. Some of these symptoms may include tiredness, dizziness, nausea, frequent urination, poor wound healing, blurred vision, and thirst (Pratley, 2013). Some of the more obvious signs of the disease include weight gain and weight loss.

When the body digests carbohydrates, glucose molecules pass through bloodstream and into cells at a rate controlled by insulin. If the body feels an increase in glucose after eating, the pancreas gets a signal to release insulin into the bloodstream. From there, insulin binds to insulin receptors and the membrane of the cell creates a boundary between the internal and external environments of the cell. At that point, one section of the cell accepts the insulin hormone and the activated receptor then sends chemical signals that gets the glucose reporter protein to create a tunnel for the insulin to pass through (Pratley, 2013). Malfunctions in this process is what causes diabetes.

In Type II Diabetes, insulin still binds to its receptor but there’s a malfunction in the signaling pathway so the glucose molecules don’t enter the cell as they are supposed to.

Type II Diabetes is recognized because of abnormally high levels of glucose in blood. It occurs when your body cannot produce enough insulin or the insulin that is produced is not properly used by your body.

Muscle tissue is impacted by no longer being able to take in insulin and glucose for energy. Fat cells of people with this disease have an increase in breakdown of fats and other lipids which results in extra fat being built up throughout the body. Both alpha and beta cells in the pancreas are greatly impacted by this disease. Beta cells main function is to produce insulin and in Type II diabetes, the beta cells lose their ability to produce insulin and the alpha cells that help to create the hormone that helps create glucose goes into overdrive (Dorman, 2004). The liver takes in extra glucose since it’s a major place for storage. The intestine stops producing a hormone that normally stimulates the body to produce insulin after the body processes food. The kidney increases its reabsorption of glucose which ends up being extremely harmful to the organ itself and the rest of the body since it eventually will no longer be able to remove glucose from the bloodstream. The brain no longers suppresses the appetite that a person has since insulin would stop this normally, so the body wants to take in more food (Dorman, 2004).

Type II Diabetes affects people around the world, but makes itself known in people who have relatives with the disease. This disease affects obese or overweight people and those who do not make healthy lifestyle choices. Research has proven that people with a poor relation between the amount of body fat and the size of their adipose cells have a greater risk of developing Type II Diabetes (Arner et al., 2011).

There are four genes that are regularly tested for the contribution of the inheritance of T2D. One form of the PPAR?? gene (Pro) decreases insulin sensitivity and increases T2D risk by several fold. (Dorman, 2004). ABCC8 (ATP binding cassette, subfamily C, member 8) and  (UKCNJ11U, also known as the potassium channel, inwardly rectifying subfamily J, member 11).  Both genes are part of the ATP-sensitive potassium channel, which plays a key role in regulating the release of hormones, such as insulin and glucagon, in the beta cell (Dorman, 2004). CAPN10 (calpain 10)U. CAPN10 encodes an intracellular calcium-dependent cysteine protease that is ubiquitously expressed (Cox et al., 2004). A haplotype that was initially linked to T2D included an intronic A to G mutation at position 43, which appears to be involved in CAPN10 transcription. (Dorman, 2004).

There is no obvious pattern of inheritance because most people develop the disease later on in life. There is a pattern that the more family members that have the disease the more likely you are to get the disease. It’s more of a clear correlation between dietary and lifestyle influences, with obesity being more of the hereditary factor. The coming generations will see a much higher chance of T2D because we are so used to eating processed foods and not engaging in regular exercise.

Type II diabetes originally was adapted many years ago to help humans put on more weight when food was scarce and the physical activity rate required to survive was extremely high (Dorman, 2004). Now, since less physical activity is required to survive, this mutation in genes is not ideal for humans to have. The phenotype of Type II Diabetes is heterogeneous but also depends on environmental factors.

Type II diabetes is more commonly found among Native Americans, Latinos, African Americans, Asian Americans, and Pacific Islanders than among Caucasians. The risk of developing this disease increases with age, especially when you hit age 45 and are becoming less able to move as well. Other factors that impact your development of this disease are being overweight or obese and having a sedentary lifestyle. Research has also been done to show that men are at a higher risk of developing type II diabetes than women. In the world, the top three countries with the highest occurrence of Type II Diabetes is China, India, and the US (Obateru et al., 2012).

Type II diabetes is a disease due to insulin not being used in the body the way it should be. There is no cure for the disease but there are several treatments out there including living a more healthy lifestyle by eating cleaner and working out more often. There are also injections and medications used to help maintain a normal blood sugar level. My understanding has changed now in a way that I understand more of the biology and chemistry concepts. The production of insulin and why it is not used effectively in the body because of the cells becoming not functional is easier to understand now that we have a background knowledge on the relationship between cells and receptors and how the malfunctions harm the body.