Breaking the Law Can be Ok 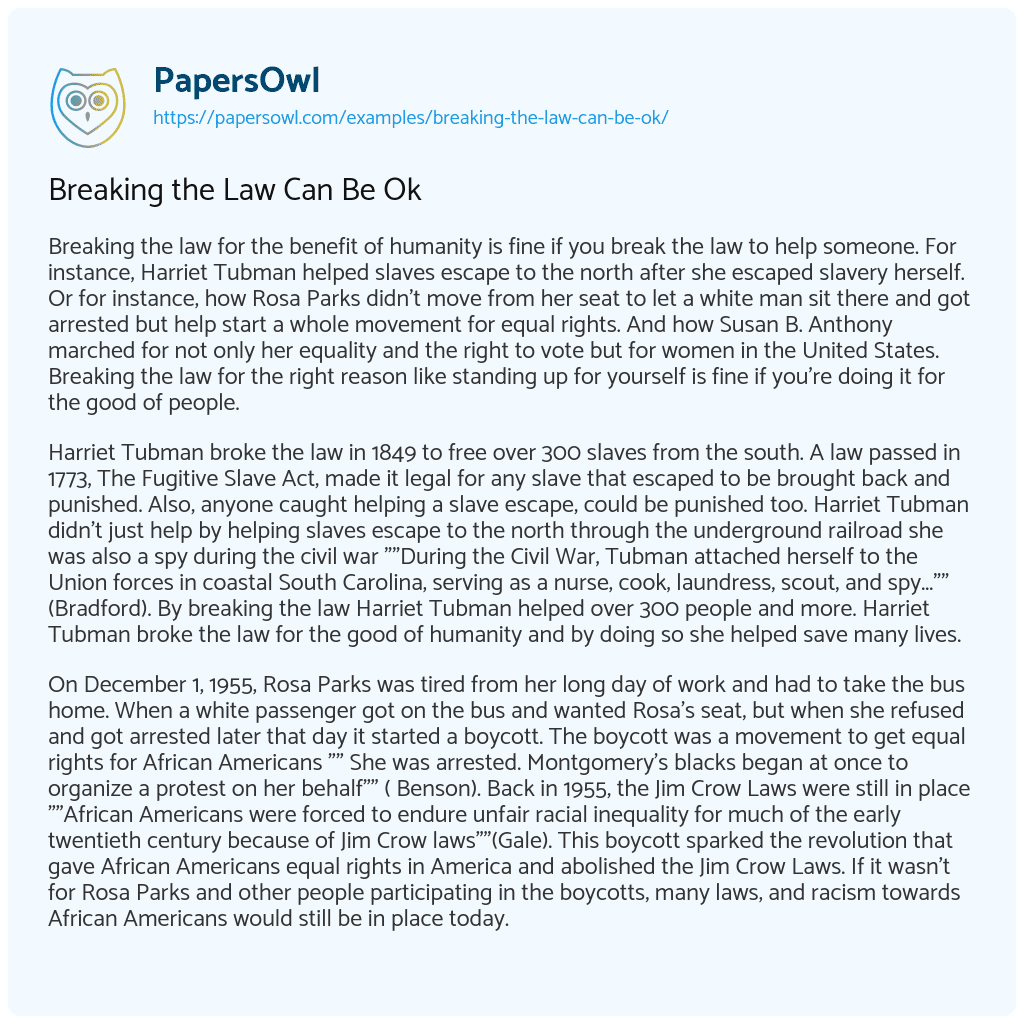 Breaking the law for the benefit of humanity is fine if you break the law to help someone. For instance, Harriet Tubman helped slaves escape to the north after she escaped slavery herself. Or for instance, how Rosa Parks didn’t move from her seat to let a white man sit there and got arrested but help start a whole movement for equal rights. And how Susan B. Anthony marched for not only her equality and the right to vote but for women in the United States. Breaking the law for the right reason like standing up for yourself is fine if you’re doing it for the good of people.

Harriet Tubman broke the law in 1849 to free over 300 slaves from the south. A law passed in 1773, The Fugitive Slave Act, made it legal for any slave that escaped to be brought back and punished. Also, anyone caught helping a slave escape, could be punished too. Harriet Tubman didn’t just help by helping slaves escape to the north through the underground railroad she was also a spy during the civil war “”During the Civil War, Tubman attached herself to the Union forces in coastal South Carolina, serving as a nurse, cook, laundress, scout, and spy…”” (Bradford). By breaking the law Harriet Tubman helped over 300 people and more. Harriet Tubman broke the law for the good of humanity and by doing so she helped save many lives.

On December 1, 1955, Rosa Parks was tired from her long day of work and had to take the bus home. When a white passenger got on the bus and wanted Rosa’s seat, but when she refused and got arrested later that day it started a boycott. The boycott was a movement to get equal rights for African Americans “” She was arrested. Montgomery’s blacks began at once to organize a protest on her behalf”” ( Benson). Back in 1955, the Jim Crow Laws were still in place “”African Americans were forced to endure unfair racial inequality for much of the early twentieth century because of Jim Crow laws””(Gale). This boycott sparked the revolution that gave African Americans equal rights in America and abolished the Jim Crow Laws. If it wasn’t for Rosa Parks and other people participating in the boycotts, many laws, and racism towards African Americans would still be in place today.

Breaking the Law Can Be Ok. (2019, Nov 23). Retrieved from https://papersowl.com/examples/breaking-the-law-can-be-ok/