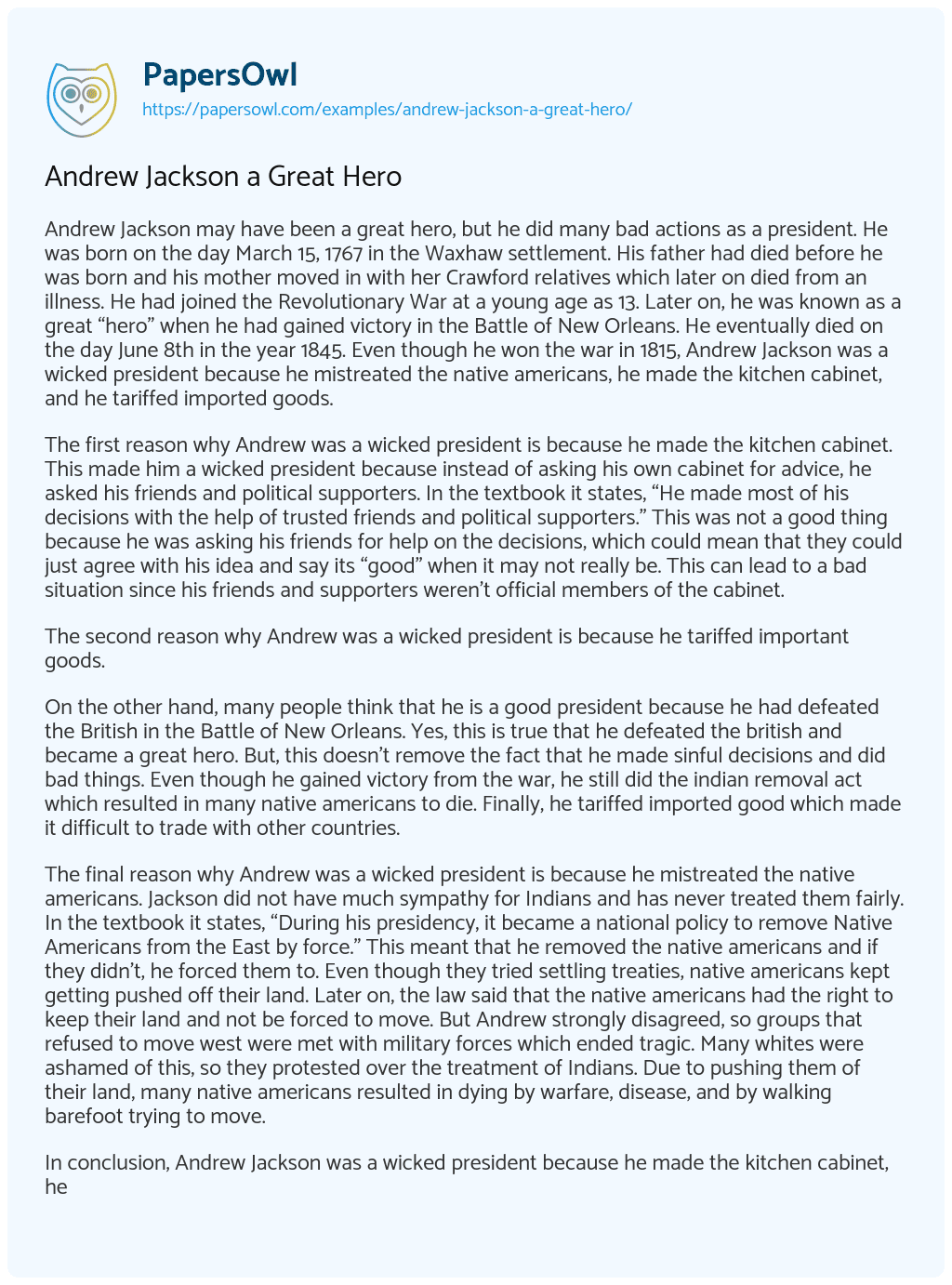 Andrew Jackson may have been a great hero, but he did many bad actions as a president. He was born on the day March 15, 1767 in the Waxhaw settlement. His father had died before he was born and his mother moved in with her Crawford relatives which later on died from an illness. He had joined the Revolutionary War at a young age as 13. Later on, he was known as a great “hero” when he had gained victory in the Battle of New Orleans. He eventually died on the day June 8th in the year 1845. Even though he won the war in 1815, Andrew Jackson was a wicked president because he mistreated the native americans, he made the kitchen cabinet, and he tariffed imported goods.

The first reason why Andrew was a wicked president is because he made the kitchen cabinet. This made him a wicked president because instead of asking his own cabinet for advice, he asked his friends and political supporters. In the textbook it states, “He made most of his decisions with the help of trusted friends and political supporters.” This was not a good thing because he was asking his friends for help on the decisions, which could mean that they could just agree with his idea and say its “good” when it may not really be. This can lead to a bad situation since his friends and supporters weren’t official members of the cabinet.

The second reason why Andrew was a wicked president is because he tariffed important goods.

On the other hand, many people think that he is a good president because he had defeated the British in the Battle of New Orleans. Yes, this is true that he defeated the british and became a great hero. But, this doesn’t remove the fact that he made sinful decisions and did bad things. Even though he gained victory from the war, he still did the indian removal act which resulted in many native americans to die. Finally, he tariffed imported good which made it difficult to trade with other countries.

The final reason why Andrew was a wicked president is because he mistreated the native americans. Jackson did not have much sympathy for Indians and has never treated them fairly. In the textbook it states, “During his presidency, it became a national policy to remove Native Americans from the East by force.” This meant that he removed the native americans and if they didn’t, he forced them to. Even though they tried settling treaties, native americans kept getting pushed off their land. Later on, the law said that the native americans had the right to keep their land and not be forced to move. But Andrew strongly disagreed, so groups that refused to move west were met with military forces which ended tragic. Many whites were ashamed of this, so they protested over the treatment of Indians. Due to pushing them of their land, many native americans resulted in dying by warfare, disease, and by walking barefoot trying to move.

In conclusion, Andrew Jackson was a wicked president because he made the kitchen cabinet, he tariffed imported goods, and he mistreated the native americans. The idea of making the kitchen cabinet was not a good way to make decisions because they may have resulted into bad ones. The way he treated the native americans was wrong and sinful which resulted to many of them dying. Finally, . Hopefully, presidents now and later on will not make sinful actions just like Andrew Jackson did.

Andrew Jackson was a Villain