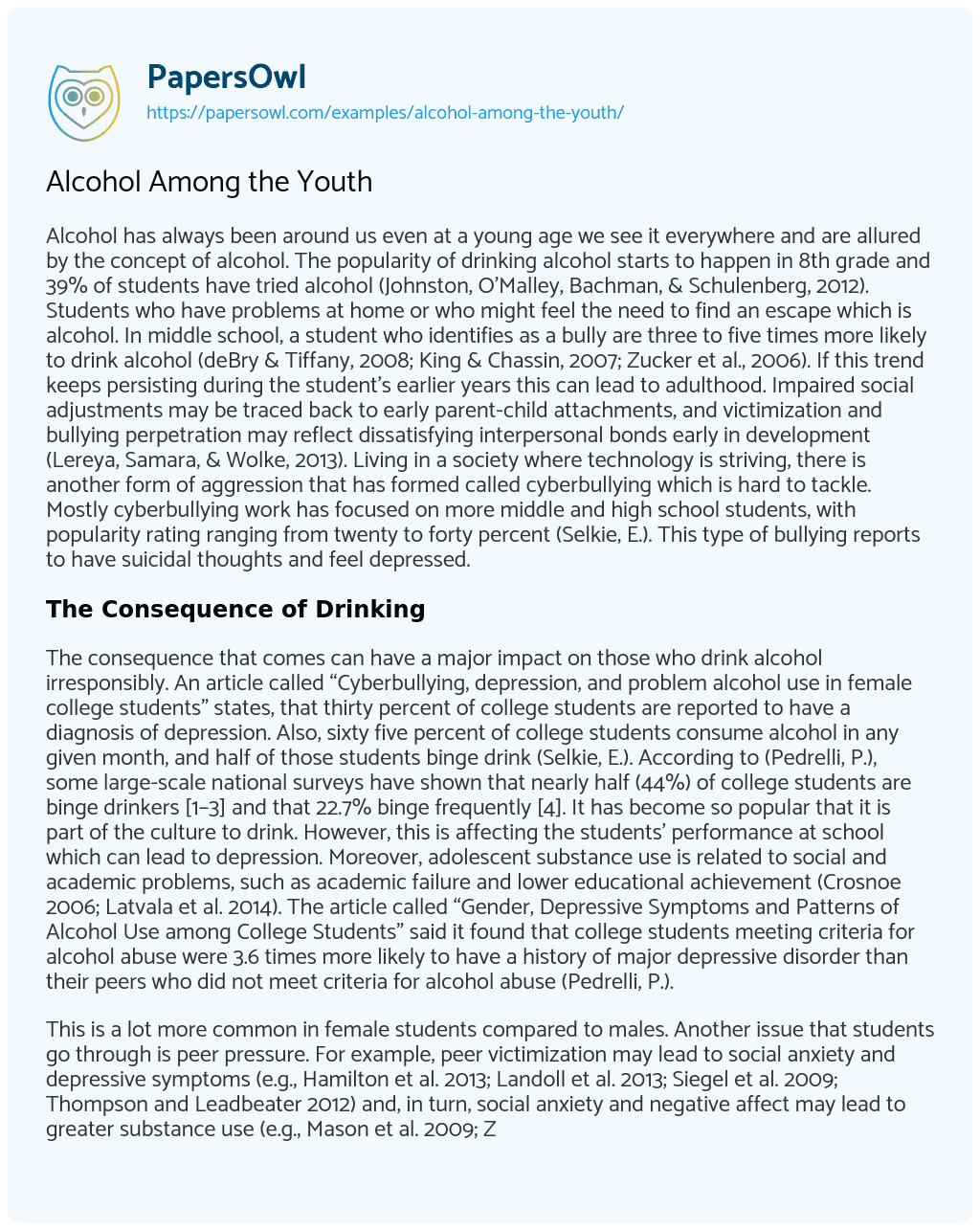 Alcohol has always been around us even at a young age we see it everywhere and are allured by the concept of alcohol. The popularity of drinking alcohol starts to happen in 8th grade and 39% of students have tried alcohol (Johnston, O’Malley, Bachman, & Schulenberg, 2012). Students who have problems at home or who might feel the need to find an escape which is alcohol. In middle school, a student who identifies as a bully are three to five times more likely to drink alcohol (deBry & Tiffany, 2008; King & Chassin, 2007; Zucker et al., 2006). If this trend keeps persisting during the student’s earlier years this can lead to adulthood. Impaired social adjustments may be traced back to early parent-child attachments, and victimization and bullying perpetration may reflect dissatisfying interpersonal bonds early in development (Lereya, Samara, & Wolke, 2013). Living in a society where technology is striving, there is another form of aggression that has formed called cyberbullying which is hard to tackle. Mostly cyberbullying work has focused on more middle and high school students, with popularity rating ranging from twenty to forty percent (Selkie, E.). This type of bullying reports to have suicidal thoughts and feel depressed.

The Consequence of Drinking

The consequence that comes can have a major impact on those who drink alcohol irresponsibly. An article called “Cyberbullying, depression, and problem alcohol use in female college students” states, that thirty percent of college students are reported to have a diagnosis of depression. Also, sixty five percent of college students consume alcohol in any given month, and half of those students binge drink (Selkie, E.). According to (Pedrelli, P.), some large-scale national surveys have shown that nearly half (44%) of college students are binge drinkers [1–3] and that 22.7% binge frequently [4]. It has become so popular that it is part of the culture to drink. However, this is affecting the students’ performance at school which can lead to depression. Moreover, adolescent substance use is related to social and academic problems, such as academic failure and lower educational achievement (Crosnoe 2006; Latvala et al. 2014). The article called “Gender, Depressive Symptoms and Patterns of Alcohol Use among College Students” said it found that college students meeting criteria for alcohol abuse were 3.6 times more likely to have a history of major depressive disorder than their peers who did not meet criteria for alcohol abuse (Pedrelli, P.).

This is a lot more common in female students compared to males. Another issue that students go through is peer pressure. For example, peer victimization may lead to social anxiety and depressive symptoms (e.g., Hamilton et al. 2013; Landoll et al. 2013; Siegel et al. 2009; Thompson and Leadbeater 2012) and, in turn, social anxiety and negative affect may lead to greater substance use (e.g., Mason et al. 2009; Zehe et al. 2013). Anxiety can hinder college student’s concentration and social skills in school. To reduce the psychological and physical anxiety symptoms, students have the capability to drink alcohol a lot more easily because of the anxiolytic properties (Keyes, Hatzenbuehler, & Hasin, 2011; Low, Lee, Johnson, Williams, & Harris, 2008). In addition, the article called, “Correlation between anxiety and alcohol consumption among college students,” by Silva, E. C., & Tucci, A. M. (2018) says that 6.5% of students drink alcohol to reduce the symptoms of anxiety. The goal of this study was to examine further the use of alcohol among students and how that affects their behavior such as having low self-esteem and anxiety. This study took place in a university with a handful of students answering a survey.

Alcohol Among the Youth. (2020, Apr 23). Retrieved from https://papersowl.com/examples/alcohol-among-the-youth/