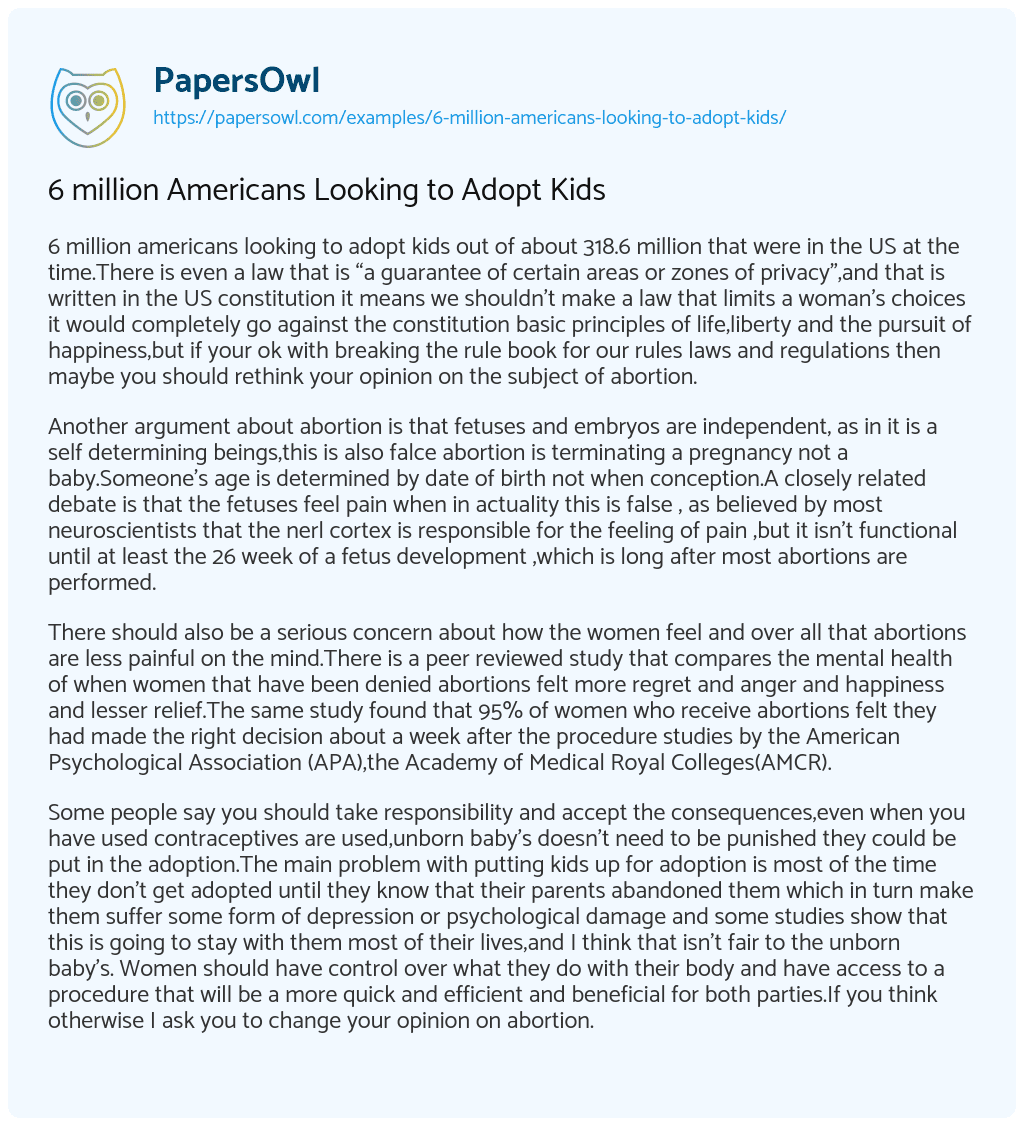 6 million americans looking to adopt kids out of about 318.6 million that were in the US at the time.There is even a law that is “a guarantee of certain areas or zones of privacy”,and that is written in the US constitution it means we shouldn’t make a law that limits a woman’s choices it would completely go against the constitution basic principles of life,liberty and the pursuit of happiness,but if your ok with breaking the rule book for our rules laws and regulations then maybe you should rethink your opinion on the subject of abortion.

Another argument about abortion is that fetuses and embryos are independent, as in it is a self determining beings,this is also falce abortion is terminating a pregnancy not a baby.Someone’s age is determined by date of birth not when conception.A closely related debate is that the fetuses feel pain when in actuality this is false , as believed by most neuroscientists that the nerl cortex is responsible for the feeling of pain ,but it isn’t functional until at least the 26 week of a fetus development ,which is long after most abortions are performed.

There should also be a serious concern about how the women feel and over all that abortions are less painful on the mind.There is a peer reviewed study that compares the mental health of when women that have been denied abortions felt more regret and anger and happiness and lesser relief.The same study found that 95% of women who receive abortions felt they had made the right decision about a week after the procedure studies by the American Psychological Association (APA),the Academy of Medical Royal Colleges(AMCR).

Some people say you should take responsibility and accept the consequences,even when you have used contraceptives are used,unborn baby’s doesn’t need to be punished they could be put in the adoption.The main problem with putting kids up for adoption is most of the time they don’t get adopted until they know that their parents abandoned them which in turn make them suffer some form of depression or psychological damage and some studies show that this is going to stay with them most of their lives,and I think that isn’t fair to the unborn baby’s. Women should have control over what they do with their body and have access to a procedure that will be a more quick and efficient and beneficial for both parties.If you think otherwise I ask you to change your opinion on abortion.

Why Abortion should be Illegal