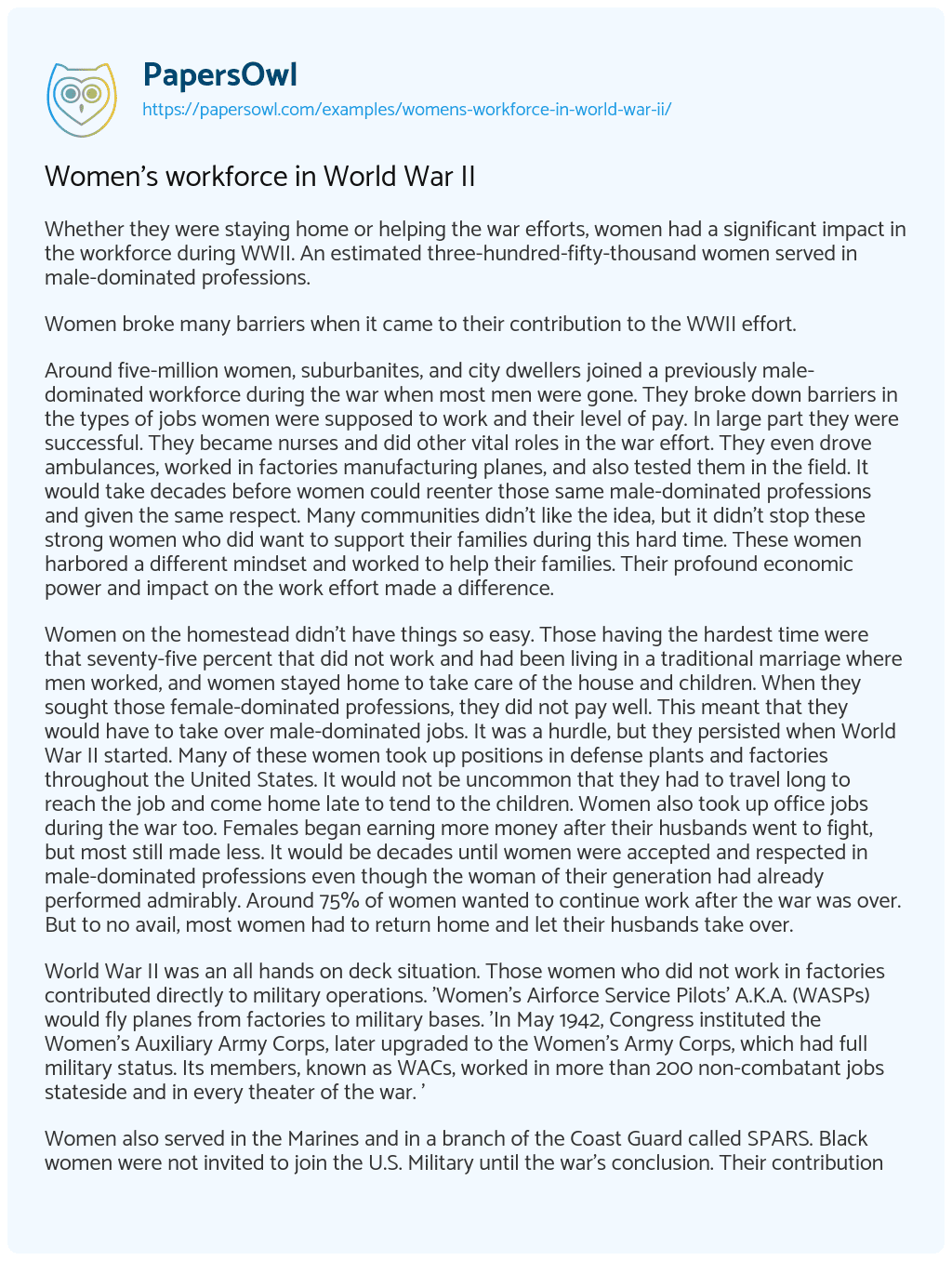 Whether they were staying home or helping the war efforts, women had a significant impact in the workforce during WWII. An estimated three-hundred-fifty-thousand women served in male-dominated professions.

Women broke many barriers when it came to their contribution to the WWII effort.

Around five-million women, suburbanites, and city dwellers joined a previously male-dominated workforce during the war when most men were gone. They broke down barriers in the types of jobs women were supposed to work and their level of pay. In large part they were successful. They became nurses and did other vital roles in the war effort. They even drove ambulances, worked in factories manufacturing planes, and also tested them in the field. It would take decades before women could reenter those same male-dominated professions and given the same respect. Many communities didn’t like the idea, but it didn’t stop these strong women who did want to support their families during this hard time. These women harbored a different mindset and worked to help their families. Their profound economic power and impact on the work effort made a difference.

Women on the homestead didn’t have things so easy. Those having the hardest time were that seventy-five percent that did not work and had been living in a traditional marriage where men worked, and women stayed home to take care of the house and children. When they sought those female-dominated professions, they did not pay well. This meant that they would have to take over male-dominated jobs. It was a hurdle, but they persisted when World War II started. Many of these women took up positions in defense plants and factories throughout the United States. It would not be uncommon that they had to travel long to reach the job and come home late to tend to the children. Women also took up office jobs during the war too. Females began earning more money after their husbands went to fight, but most still made less. It would be decades until women were accepted and respected in male-dominated professions even though the woman of their generation had already performed admirably. Around 75% of women wanted to continue work after the war was over. But to no avail, most women had to return home and let their husbands take over.

World War II was an all hands on deck situation. Those women who did not work in factories contributed directly to military operations. ‘Women’s Airforce Service Pilots’ A.K.A. (WASPs) would fly planes from factories to military bases. ‘In May 1942, Congress instituted the Women’s Auxiliary Army Corps, later upgraded to the Women’s Army Corps, which had full military status. Its members, known as WACs, worked in more than 200 non-combatant jobs stateside and in every theater of the war. ‘

Women also served in the Marines and in a branch of the Coast Guard called SPARS. Black women were not invited to join the U.S. Military until the war’s conclusion. Their contributions extended to working directly for the nascent defensive industry building and designing weapons too. Out of this group became future engineers and industrial designers. Many women with scientific abilities were recruited directly to Roswell to help construct the first atomic bomb. On the downside of this progress, most of them were underpaid and overworked. They worked as pipe-fitters, inspectors, machine operators, typists, and nurses as well as doctors, physicists, chemists, and engineers. There were more woman employees involved in the Manhattan Project compared to the Apollo Project decades later. In the movie, Hidden Figures the struggle of African American women attempting to put a man on the moon was depicted. They were just as competent and motivated as their white coworkers. At the conclusion of the war, many of these same women continued their studies and would go on to receive numerous masters and doctorate degrees. When the Hydrogen Bomb replaced the Atomic Bomb, many of these same women were instrumental to construction. Women of color participation still existed but at lower rates.

Women have always prevailed in times of doubt. They took care of America while the men were fighting the war. They served with distinction in World War II which was revolutionary. It was a new outlook and template of how important women were to the advancement of America.

When Women Joined the Workforce

The Workforce is not Sexist