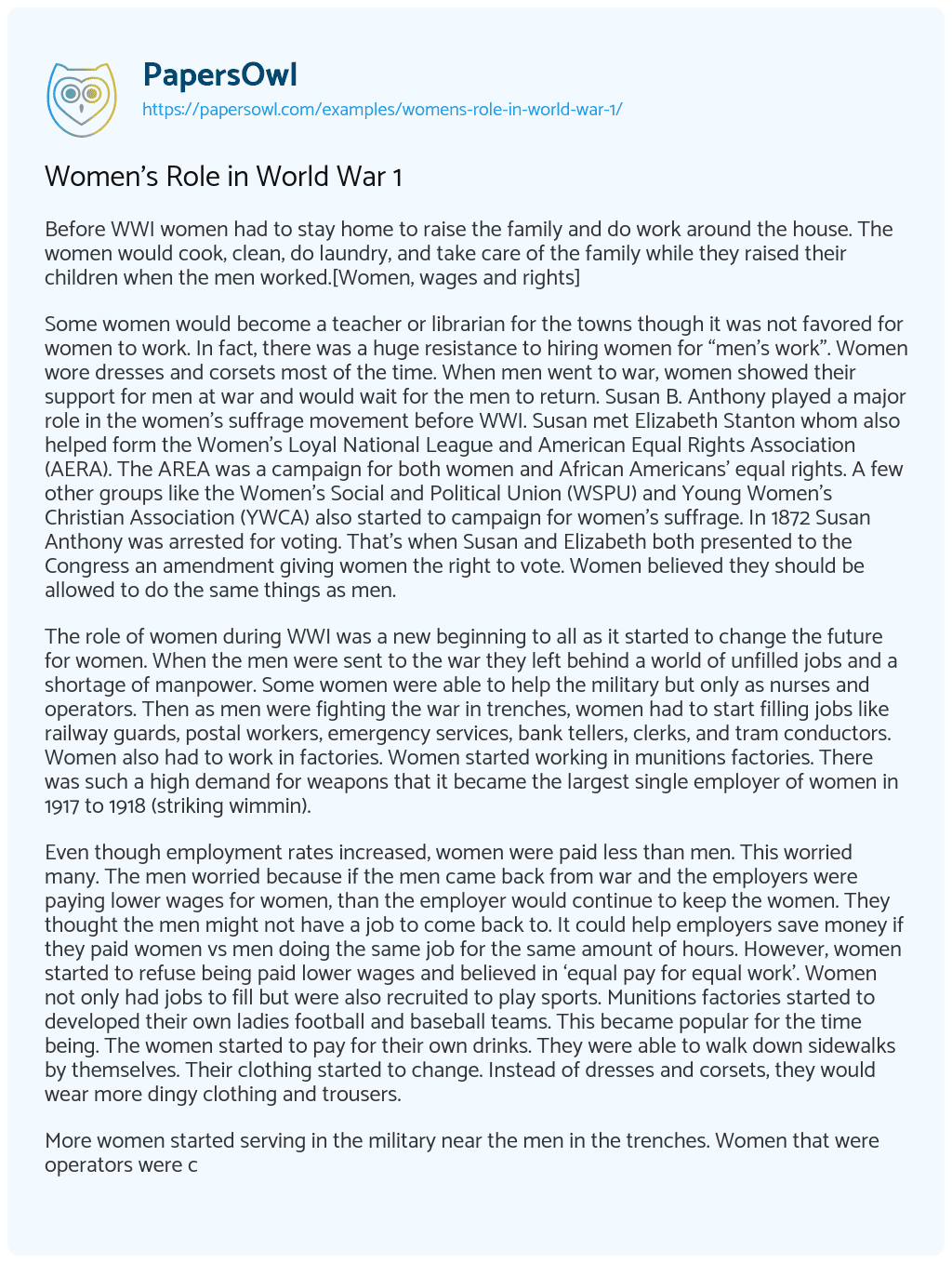 Before WWI women had to stay home to raise the family and do work around the house. The women would cook, clean, do laundry, and take care of the family while they raised their children when the men worked.[Women, wages and rights]

Some women would become a teacher or librarian for the towns though it was not favored for women to work. In fact, there was a huge resistance to hiring women for “men’s work”. Women wore dresses and corsets most of the time. When men went to war, women showed their support for men at war and would wait for the men to return. Susan B. Anthony played a major role in the women’s suffrage movement before WWI. Susan met Elizabeth Stanton whom also helped form the Women’s Loyal National League and American Equal Rights Association (AERA). The AREA was a campaign for both women and African Americans’ equal rights. A few other groups like the Women’s Social and Political Union (WSPU) and Young Women’s Christian Association (YWCA) also started to campaign for women’s suffrage. In 1872 Susan Anthony was arrested for voting. That’s when Susan and Elizabeth both presented to the Congress an amendment giving women the right to vote. Women believed they should be allowed to do the same things as men.

The role of women during WWI was a new beginning to all as it started to change the future for women. When the men were sent to the war they left behind a world of unfilled jobs and a shortage of manpower. Some women were able to help the military but only as nurses and operators. Then as men were fighting the war in trenches, women had to start filling jobs like railway guards, postal workers, emergency services, bank tellers, clerks, and tram conductors. Women also had to work in factories. Women started working in munitions factories. There was such a high demand for weapons that it became the largest single employer of women in 1917 to 1918 (striking wimmin).

Even though employment rates increased, women were paid less than men. This worried many. The men worried because if the men came back from war and the employers were paying lower wages for women, than the employer would continue to keep the women. They thought the men might not have a job to come back to. It could help employers save money if they paid women vs men doing the same job for the same amount of hours. However, women started to refuse being paid lower wages and believed in ‘equal pay for equal work’. Women not only had jobs to fill but were also recruited to play sports. Munitions factories started to developed their own ladies football and baseball teams. This became popular for the time being. The women started to pay for their own drinks. They were able to walk down sidewalks by themselves. Their clothing started to change. Instead of dresses and corsets, they would wear more dingy clothing and trousers.

More women started serving in the military near the men in the trenches. Women that were operators were called “Hello Girls” but it also gave the women a chance to show they were more equal to men than ever before. Women also had the opportunity to vote. The first Lady Astor to take seat in Parliament was in December 1919.[1918 Qualification of Women Act].Today women have shown they can work side by side with men and be just as important as men. Prior to the elections that took place in 2018, 107 women served in the Congress. As of November, it was announced there are more that were voted into congress. There are now many women with different ethnic backgrounds that range from young to old. This election now marks the first youngest women at age 29, the first Native American, and the first two Muslims elected in Congress.

So as you can see over time women have changed from being housewives to becoming just as important as men. Factories lick ammunition factories have wanted to have a sport like football and soccer. There are still some jobs out there that aren’t made for some women but they have shown they are willing to still try. Women also had to pay for food and have less taxes.men were weird because if women got less money then the employers wouldn’t need much less people to work for and have less wages.

The Role of Women in Wartime