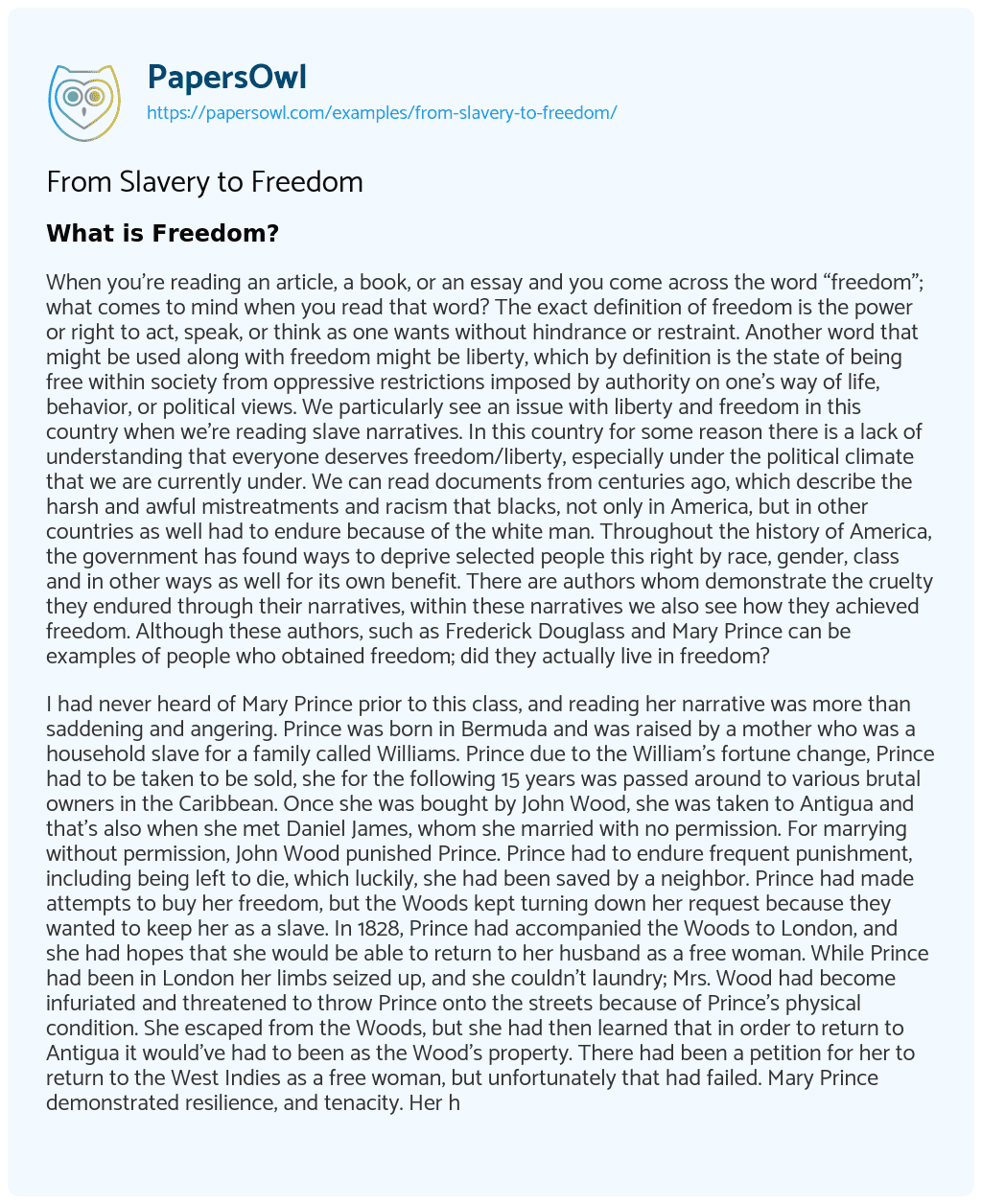 When you’re reading an article, a book, or an essay and you come across the word “freedom”; what comes to mind when you read that word? The exact definition of freedom is the power or right to act, speak, or think as one wants without hindrance or restraint. Another word that might be used along with freedom might be liberty, which by definition is the state of being free within society from oppressive restrictions imposed by authority on one’s way of life, behavior, or political views. We particularly see an issue with liberty and freedom in this country when we’re reading slave narratives. In this country for some reason there is a lack of understanding that everyone deserves freedom/liberty, especially under the political climate that we are currently under. We can read documents from centuries ago, which describe the harsh and awful mistreatments and racism that blacks, not only in America, but in other countries as well had to endure because of the white man. Throughout the history of America, the government has found ways to deprive selected people this right by race, gender, class and in other ways as well for its own benefit. There are authors whom demonstrate the cruelty they endured through their narratives, within these narratives we also see how they achieved freedom. Although these authors, such as Frederick Douglass and Mary Prince can be examples of people who obtained freedom; did they actually live in freedom?

I had never heard of Mary Prince prior to this class, and reading her narrative was more than saddening and angering. Prince was born in Bermuda and was raised by a mother who was a household slave for a family called Williams. Prince due to the William’s fortune change, Prince had to be taken to be sold, she for the following 15 years was passed around to various brutal owners in the Caribbean. Once she was bought by John Wood, she was taken to Antigua and that’s also when she met Daniel James, whom she married with no permission. For marrying without permission, John Wood punished Prince. Prince had to endure frequent punishment, including being left to die, which luckily, she had been saved by a neighbor. Prince had made attempts to buy her freedom, but the Woods kept turning down her request because they wanted to keep her as a slave. In 1828, Prince had accompanied the Woods to London, and she had hopes that she would be able to return to her husband as a free woman. While Prince had been in London her limbs seized up, and she couldn’t laundry; Mrs. Wood had become infuriated and threatened to throw Prince onto the streets because of Prince’s physical condition. She escaped from the Woods, but she had then learned that in order to return to Antigua it would’ve had to been as the Wood’s property. There had been a petition for her to return to the West Indies as a free woman, but unfortunately that had failed. Mary Prince demonstrated resilience, and tenacity. Her history played an important role when it came to abolishing the slavery system.

Another important figure that we can note is Frederick Douglass. Unlike Mary Prince, Douglass was a male and experience slavery in the United States. Douglass’ narrative is one that many of us have read, but maybe we all haven’t sat down to analyze the significance and the importance that he had we it came to freedom, and abolitionism. Douglass was born into slavery around 1817-1818, he was unsure about his exact birthdate like perhaps many other slaves. As soon as he was born he was separated from his mother, and his father was assumed to most likely had been their master. In his narrative as readers we read the cruelty that Douglass experienced when he was younger. At the age of seven he was sold to Captain Anthony’s son-in-law’s brother, Hugh Auld, where he explained that he was seemingly content with the “freer life” in Baltimore. Hugh’s wife had never had slaves before and at first is kind to Douglass and even teaches him how to read. Hugh ordered his wife to stop teaching Douglass to read because he claimed that it made slaves “unmanageable”, eventually Sophia stopped her friendliness and succumbed to the mentality of slave owning. Douglass continued to read, which allowed his to become conscious about the evils of slavery, and he had also learned about the abolitionist and anti-slavery movement. Throughout the narrative we then see that captain Anthony dies, and Douglass had to be taken to serve Thomas Auld, he was described to be extremely cruel, harsh, and heartless. Douglass throughout his narrative explained all of the harsh punishments he had to endure, along with how cruelly he was treated. Douglass managed to find his freedom by posing as a free sailor and boarded a train to New York. The important question to consider is if Douglass could actually walk around freely? He had to live in some fear because at the end of the day he wasn’t a freed sailor, and he could’ve been caught at any time.

Both Mary Prince and Frederick Douglass were important historical figures, and their history helped shape a lot, especially when it came in terms of abolishing slavery. Though they were both important figures, who helped us advance forward, they also had different experiences. Mary Prince as a black woman in the Caribbean had to endure extremely harsh punishments, which makes us as readers realize the intensity and horrors that came from slavery. Though once she was in London she was a free woman, she had to deal with the fact that going back to her husband would’ve enslaved her. The freedom that she was experiencing could’ve easily been taken away from her because even if she was a free woman, the white man still dictated her freedom. With Frederick Douglass he experienced slavery in the United States, and although he was still going to through awful and horrid treatments, his experience was much different than Mary Prince’s. Frederick Douglass achieved freedom because he posed a freed sailor, but we have to think about the horrifying moment where he could’ve been caught on the train. Even when Douglass arrived to New York, a free state, he still had his freedom and liberty at risk. Though Mary Prince and Frederick Douglass were eventually both free, they still had something or situations that would dictate their freedom. When you think about freedom or liberty, do you think that all of us hold the literal definition of it?

From Slavery to Freedom. (2022, Feb 09). Retrieved from https://papersowl.com/examples/from-slavery-to-freedom/