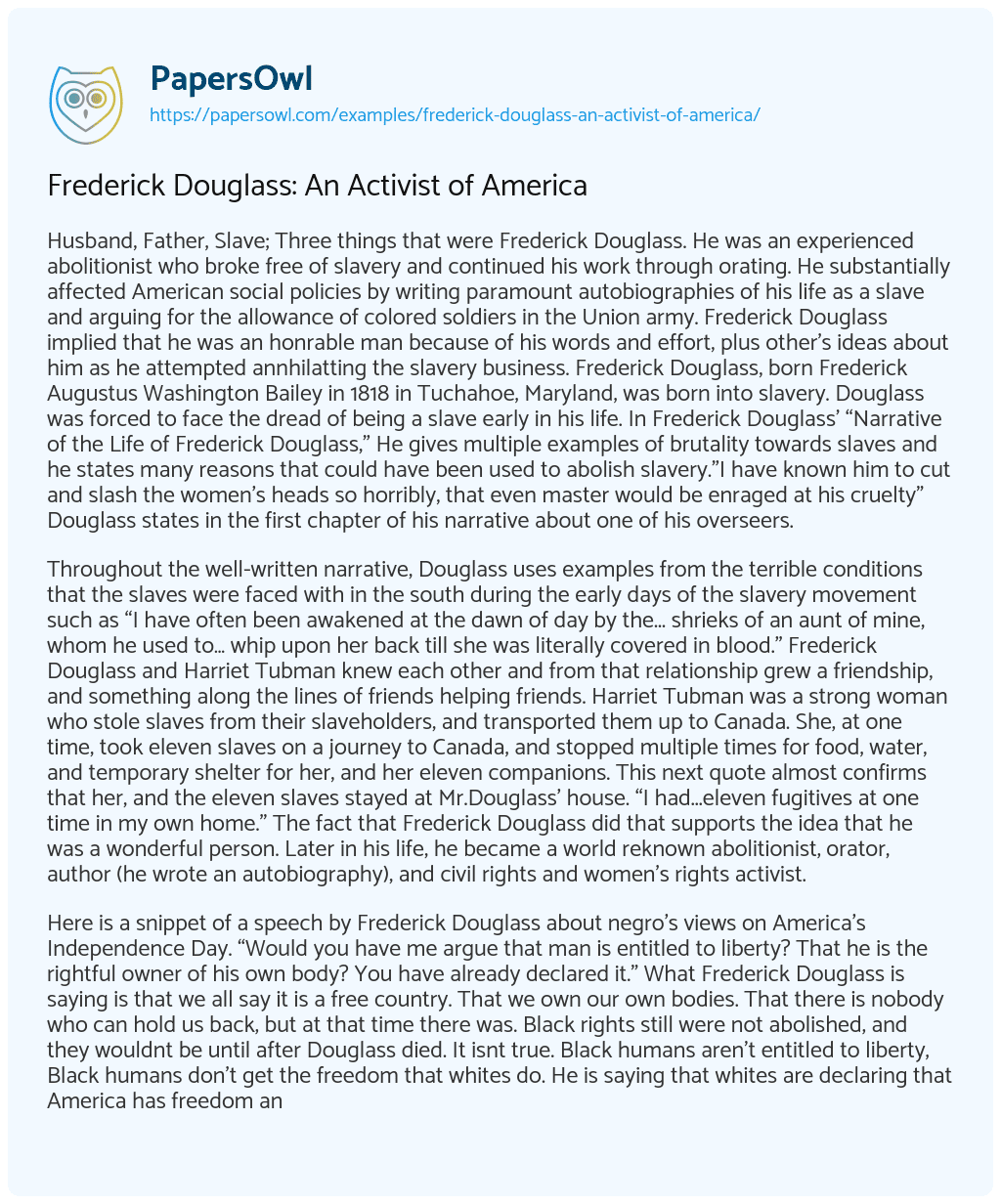 Husband, Father, Slave; Three things that were Frederick Douglass. He was an experienced abolitionist who broke free of slavery and continued his work through orating. He substantially affected American social policies by writing paramount autobiographies of his life as a slave and arguing for the allowance of colored soldiers in the Union army. Frederick Douglass implied that he was an honrable man because of his words and effort, plus other’s ideas about him as he attempted annhilatting the slavery business. Frederick Douglass, born Frederick Augustus Washington Bailey in 1818 in Tuchahoe, Maryland, was born into slavery. Douglass was forced to face the dread of being a slave early in his life. In Frederick Douglass’ “Narrative of the Life of Frederick Douglass,” He gives multiple examples of brutality towards slaves and he states many reasons that could have been used to abolish slavery.”I have known him to cut and slash the women’s heads so horribly, that even master would be enraged at his cruelty” Douglass states in the first chapter of his narrative about one of his overseers.

Throughout the well-written narrative, Douglass uses examples from the terrible conditions that the slaves were faced with in the south during the early days of the slavery movement such as “I have often been awakened at the dawn of day by the… shrieks of an aunt of mine, whom he used to… whip upon her back till she was literally covered in blood.” Frederick Douglass and Harriet Tubman knew each other and from that relationship grew a friendship, and something along the lines of friends helping friends. Harriet Tubman was a strong woman who stole slaves from their slaveholders, and transported them up to Canada. She, at one time, took eleven slaves on a journey to Canada, and stopped multiple times for food, water, and temporary shelter for her, and her eleven companions. This next quote almost confirms that her, and the eleven slaves stayed at Mr.Douglass’ house. “I had…eleven fugitives at one time in my own home.” The fact that Frederick Douglass did that supports the idea that he was a wonderful person. Later in his life, he became a world reknown abolitionist, orator, author (he wrote an autobiography), and civil rights and women’s rights activist.

Here is a snippet of a speech by Frederick Douglass about negro’s views on America’s Independence Day. “Would you have me argue that man is entitled to liberty? That he is the rightful owner of his own body? You have already declared it.” What Frederick Douglass is saying is that we all say it is a free country. That we own our own bodies. That there is nobody who can hold us back, but at that time there was. Black rights still were not abolished, and they wouldnt be until after Douglass died. It isnt true. Black humans aren’t entitled to liberty, Black humans don’t get the freedom that whites do. He is saying that whites are declaring that America has freedom and they don’t understand that blacks still didn’t have full rights as humans. Frederick Douglass was the kind of man that would help an elderly walk across the street. The type of man who would compliment a stranger looking stressed. The sort of man who let’s someone take his taxi gladly when he is already late. Frederick Douglass was a great man for all of his 77 years. He was a civil rights activist, abolitionist, orator, and author, who knew what he was doing, and in his experience as a slave, shared it with others, and in that, changed the world around us to what it is today. Frederick Augustus Douglass. Husband. Father. Slave.

Frederick Douglass: An Activist of America. (2021, Jul 10). Retrieved from https://papersowl.com/examples/frederick-douglass-an-activist-of-america/