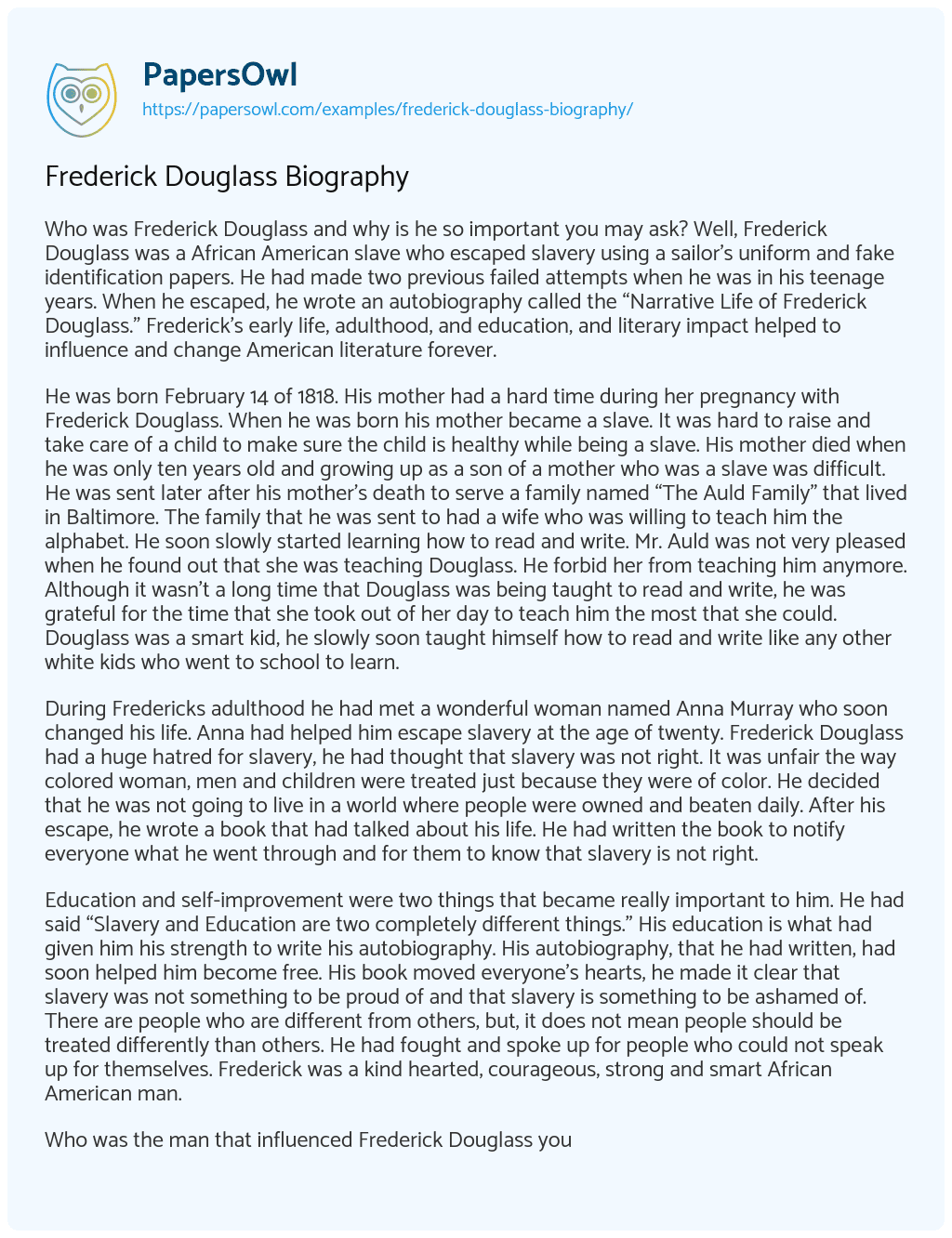 Who was Frederick Douglass and why is he so important you may ask? Well, Frederick Douglass was a African American slave who escaped slavery using a sailor’s uniform and fake identification papers. He had made two previous failed attempts when he was in his teenage years. When he escaped, he wrote an autobiography called the “Narrative Life of Frederick Douglass.” Frederick’s early life, adulthood, and education, and literary impact helped to influence and change American literature forever.

He was born February 14 of 1818. His mother had a hard time during her pregnancy with Frederick Douglass. When he was born his mother became a slave. It was hard to raise and take care of a child to make sure the child is healthy while being a slave. His mother died when he was only ten years old and growing up as a son of a mother who was a slave was difficult. He was sent later after his mother’s death to serve a family named “The Auld Family” that lived in Baltimore. The family that he was sent to had a wife who was willing to teach him the alphabet. He soon slowly started learning how to read and write. Mr. Auld was not very pleased when he found out that she was teaching Douglass. He forbid her from teaching him anymore. Although it wasn’t a long time that Douglass was being taught to read and write, he was grateful for the time that she took out of her day to teach him the most that she could. Douglass was a smart kid, he slowly soon taught himself how to read and write like any other white kids who went to school to learn.

During Fredericks adulthood he had met a wonderful woman named Anna Murray who soon changed his life. Anna had helped him escape slavery at the age of twenty. Frederick Douglass had a huge hatred for slavery, he had thought that slavery was not right. It was unfair the way colored woman, men and children were treated just because they were of color. He decided that he was not going to live in a world where people were owned and beaten daily. After his escape, he wrote a book that had talked about his life. He had written the book to notify everyone what he went through and for them to know that slavery is not right.

Education and self-improvement were two things that became really important to him. He had said “Slavery and Education are two completely different things.” His education is what had given him his strength to write his autobiography. His autobiography, that he had written, had soon helped him become free. His book moved everyone’s hearts, he made it clear that slavery was not something to be proud of and that slavery is something to be ashamed of. There are people who are different from others, but, it does not mean people should be treated differently than others. He had fought and spoke up for people who could not speak up for themselves. Frederick was a kind hearted, courageous, strong and smart African American man.

Who was the man that influenced Frederick Douglass you ask? Well, he met a man named William Lloyd Garrison. Garrison was a man who had influenced Douglass to become a speaker and a leader in the abolitionist movement. Although Garrison had impressed Douglass, Douglass himself had impressed Garrison. Garrison had mentioned Douglass in the “Liberator.” For days on after douglass had given speeches at the “Massachusetts Anti-Slavery Society’s” annual convention in Nantucket. Soon later on the arguments between Garrison and Douglass’s beliefs had set a big dispute between them. Frederick put aside all disputes and had decided to continue his active involvement to better the lives of African Americans. Despite all of the apprehensions that might put his freedom in jeopardy, he published his autobiography. His autobiography was called, “Narrative of the Life of Frederick Douglass, an American Slave, written by Himself”.

Frederick always tried to help people who were enslaved. He gave speeches, and wrote a book so he could make a difference to change people’s minds on slavery. He had goals to “abolish slavery in all its forms and aspects”. He gave lectures on the subject of freedom. He had many thoughts and opinions on slavery. Being a slave did not stop Douglass from helping others, and he pushed himself to make the world a better place. Douglass was nervous and shy but he soon went on to become a great public speaker. Frederick grew up to become a leader in the abolitionist movement and had tried to remove slavery from the world.

Over all, Douglass was a very inspirational person. He tried to help us understand about what he had gone through and how slavery impacted him. He made us notice that slavery was not right and that slavery should never be a thing. He made sure that everybody knew that everyone is equal even if someone is colored or not. Frederick Douglass wrote a quote and it speaks a lot. “ Once you learn how to read, you will forever be free”. Douglass is saying that when you learn how to read, you can speak your opinions out loud. Inspire others to speak up and inspire others to help make the world better than it already is. Everyone’s opinions matter and everyone has a say in everything, even if there really is no conclusion to the situation.