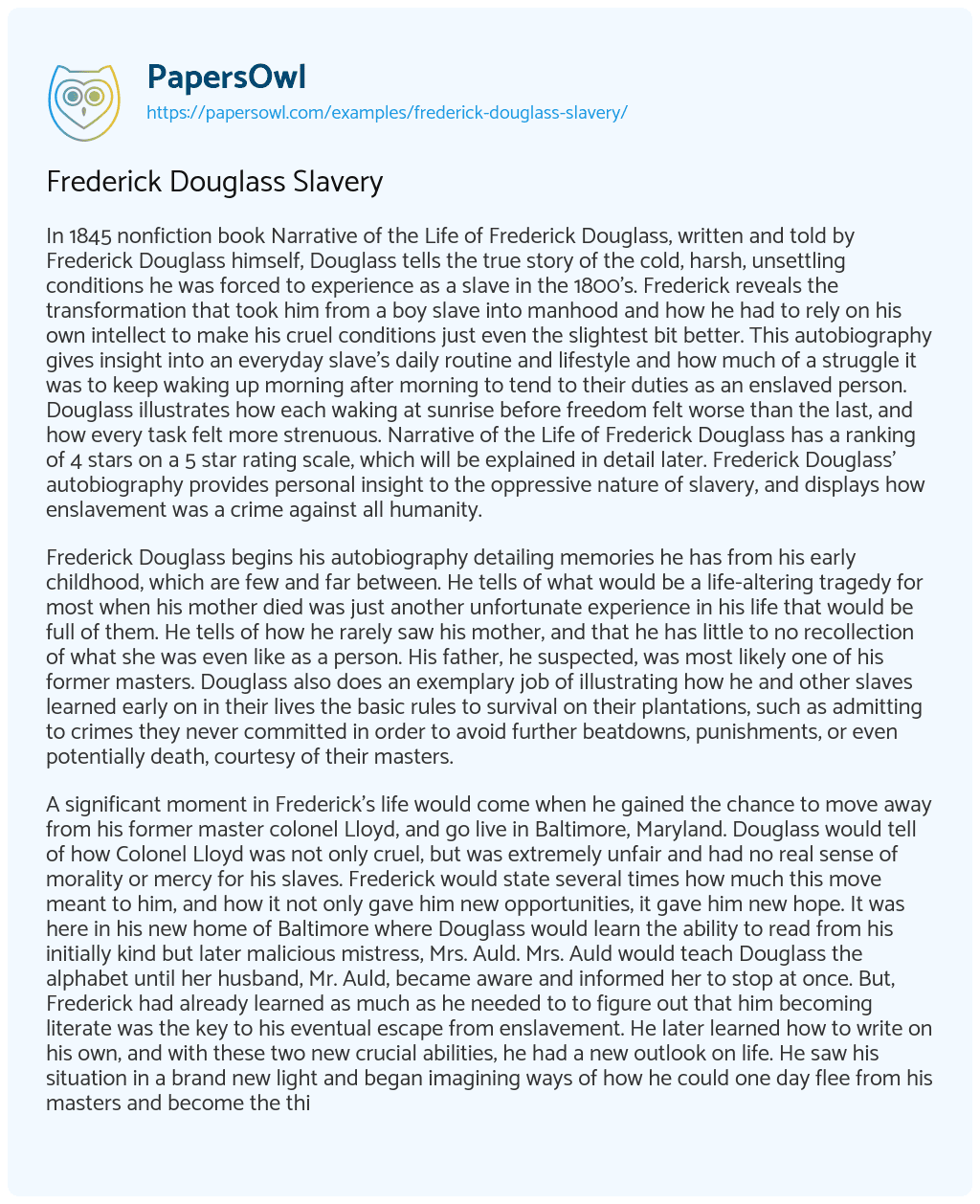 In 1845 nonfiction book Narrative of the Life of Frederick Douglass, written and told by Frederick Douglass himself, Douglass tells the true story of the cold, harsh, unsettling conditions he was forced to experience as a slave in the 1800’s. Frederick reveals the transformation that took him from a boy slave into manhood and how he had to rely on his own intellect to make his cruel conditions just even the slightest bit better. This autobiography gives insight into an everyday slave’s daily routine and lifestyle and how much of a struggle it was to keep waking up morning after morning to tend to their duties as an enslaved person. Douglass illustrates how each waking at sunrise before freedom felt worse than the last, and how every task felt more strenuous. Narrative of the Life of Frederick Douglass has a ranking of 4 stars on a 5 star rating scale, which will be explained in detail later. Frederick Douglass’ autobiography provides personal insight to the oppressive nature of slavery, and displays how enslavement was a crime against all humanity.

Frederick Douglass begins his autobiography detailing memories he has from his early childhood, which are few and far between. He tells of what would be a life-altering tragedy for most when his mother died was just another unfortunate experience in his life that would be full of them. He tells of how he rarely saw his mother, and that he has little to no recollection of what she was even like as a person. His father, he suspected, was most likely one of his former masters. Douglass also does an exemplary job of illustrating how he and other slaves learned early on in their lives the basic rules to survival on their plantations, such as admitting to crimes they never committed in order to avoid further beatdowns, punishments, or even potentially death, courtesy of their masters.

A significant moment in Frederick’s life would come when he gained the chance to move away from his former master colonel Lloyd, and go live in Baltimore, Maryland. Douglass would tell of how Colonel Lloyd was not only cruel, but was extremely unfair and had no real sense of morality or mercy for his slaves. Frederick would state several times how much this move meant to him, and how it not only gave him new opportunities, it gave him new hope. It was here in his new home of Baltimore where Douglass would learn the ability to read from his initially kind but later malicious mistress, Mrs. Auld. Mrs. Auld would teach Douglass the alphabet until her husband, Mr. Auld, became aware and informed her to stop at once. But, Frederick had already learned as much as he needed to to figure out that him becoming literate was the key to his eventual escape from enslavement. He later learned how to write on his own, and with these two new crucial abilities, he had a new outlook on life. He saw his situation in a brand new light and began imagining ways of how he could one day flee from his masters and become the thing he had always desired: a free man. Frederick emphasizes that this was truly the turning point in his life as a slave, and now freedom was the only thing on his mind for the days and months that would follow.

Douglass’ master would later die, and Frederick would eventually end up being a slave to new master, Mr. Covey. Initially, Frederick was ecstatic to be in the hands of Mr. Covey because Mr. Covey had a reputation for feeding his slaves a substantial amount of food to eat each day. Douglass would make a clear point earlier on in his autobiography that the worst thing a master could do to his slaves was not feed them enough food to consume, which Douglass no longer had to worry about. On the contrary, he would later find out that Mr. Covey had a reputation for being something else; a “negro-breaker.” Frederick made great points of how this “negro-breaker” reputation would prove to initially be far worse than anything he had experienced in his life as a slave before, but he would also foreshadow how this reputation led him to obtaining manhood. Douglass was subject to whippings, beatdowns, and verbal humiliation on a regular basis. He would be hurt to the point where he could not make it back to his feet, and still, he would be beaten once more. This built-up frustration with his master finally led to Frederick fighting back the next time Mr. Covey came to assault him, and after two hours of fighting, he would prevail over his master. Frederick would describe how this victory brought upon him a euphoric-like feeling, and that he had once more obtained a sense of his own manhood. For the remaining months Mr. Covey would be Douglass’ master, he did not lay a single finger on him. Douglass would later be sent to a new plantation, and ultimately flee up to the North where he would at last be a free man.

Autobiography Narrative of the Life of Frederick Douglass gives the reader an up close and personal look at what an ordinary slave had to go through each and every laborious day, and does a wonderful job of thoroughly telling how slavery shaped Frederick’s entire life and impacted his every thought. Douglass tells his own personal story in intricate detail which will tug at the heartstrings of the reader each time out of pure commiseration for him and his unimaginable struggles. This nonfiction novel was both informative and captivating from start to finish. It not only told a story, it gave the reader new insight to unknown thoughts and feelings an ordinary slave would have on a daily basis. Furthermore, Frederick wonderfully wrote this novel of his life’s story especially well for someone who only learned the alphabet in their young adulthood. Frederick intended to show the world the cruelties of slavery and how he fought through enslavement in his own way, and he very much succeeded in doing that in this novel. The only flaw in this book would be with Frederick not fully and thoroughly going into detail about how he made his escape from slavery, although he did have a reasonable explanation for why he could not go into that detail. He would state how he chose not to reveal his escape plan because he wanted to use it to help other slaves abscond, which would not be very possible if that information became public knowledge. Still, to this day many are left wondering just exactly how he did it, despite a few subtle clues in the closing chapters of the autobiography.

If Frederick intended to use this descriptive book to give the world intuition on how slaves were treated and affected during his time period, and also tell a story of how he was changed from a slave to a man, then he very much succeeded in his autobiography Narrative of the Life of Frederick Douglass. He aimed to tell the world just who he was and how he became the man he was, and he did exactly that. This novel of Frederick Douglass’ life was a captivating, enthralling page-turner, and it is a definite read for any and all people.