History of the World War 1 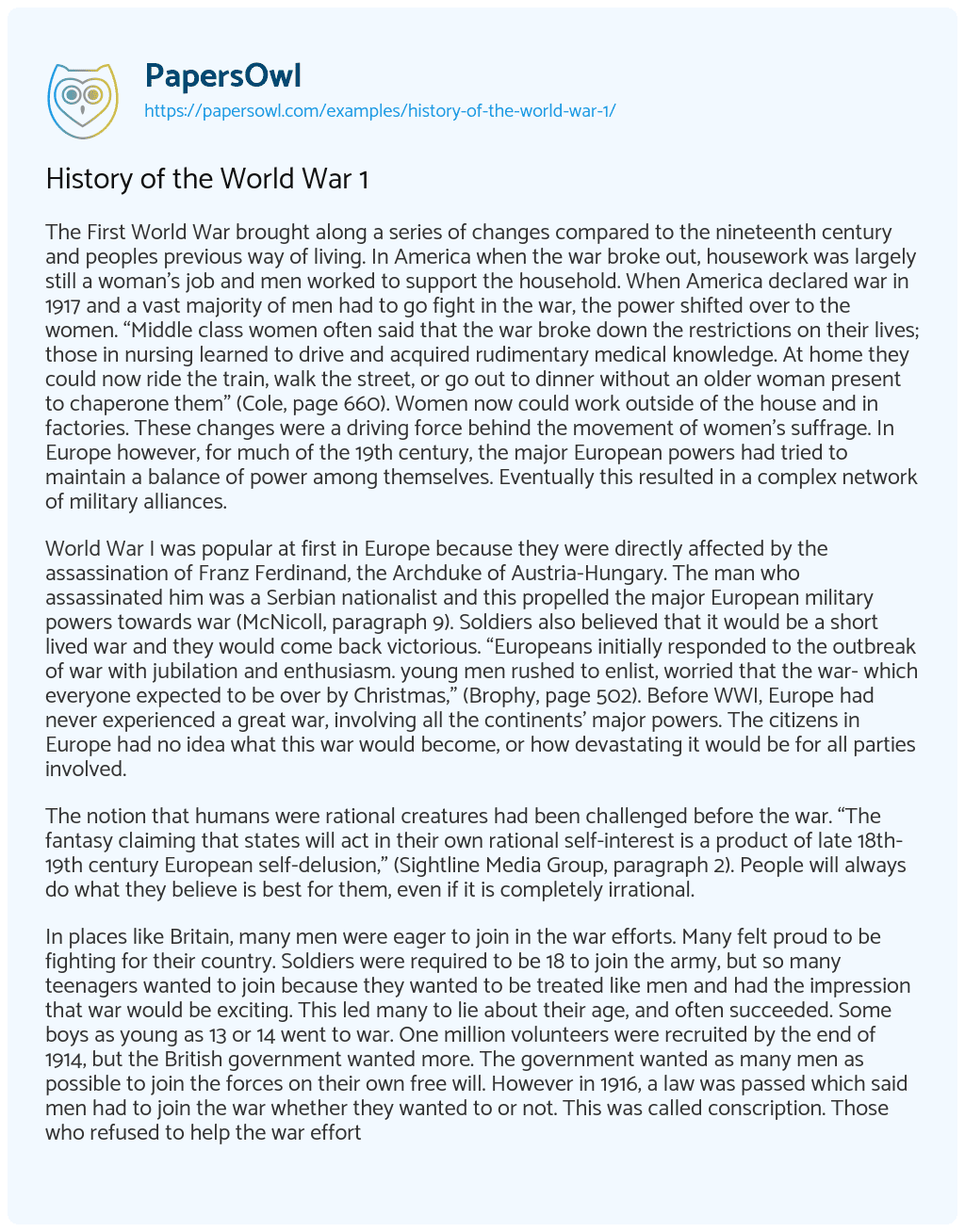 The First World War brought along a series of changes compared to the nineteenth century and peoples previous way of living. In America when the war broke out, housework was largely still a woman’s job and men worked to support the household. When America declared war in 1917 and a vast majority of men had to go fight in the war, the power shifted over to the women. “Middle class women often said that the war broke down the restrictions on their lives; those in nursing learned to drive and acquired rudimentary medical knowledge. At home they could now ride the train, walk the street, or go out to dinner without an older woman present to chaperone them” (Cole, page 660). Women now could work outside of the house and in factories. These changes were a driving force behind the movement of women’s suffrage. In Europe however, for much of the 19th century, the major European powers had tried to maintain a balance of power among themselves. Eventually this resulted in a complex network of military alliances.

World War I was popular at first in Europe because they were directly affected by the assassination of Franz Ferdinand, the Archduke of Austria-Hungary. The man who assassinated him was a Serbian nationalist and this propelled the major European military powers towards war (McNicoll, paragraph 9). Soldiers also believed that it would be a short lived war and they would come back victorious. “Europeans initially responded to the outbreak of war with jubilation and enthusiasm. young men rushed to enlist, worried that the war- which everyone expected to be over by Christmas,” (Brophy, page 502). Before WWI, Europe had never experienced a great war, involving all the continents’ major powers. The citizens in Europe had no idea what this war would become, or how devastating it would be for all parties involved.

The notion that humans were rational creatures had been challenged before the war. “The fantasy claiming that states will act in their own rational self-interest is a product of late 18th-19th century European self-delusion,” (Sightline Media Group, paragraph 2). People will always do what they believe is best for them, even if it is completely irrational.

In places like Britain, many men were eager to join in the war efforts. Many felt proud to be fighting for their country. Soldiers were required to be 18 to join the army, but so many teenagers wanted to join because they wanted to be treated like men and had the impression that war would be exciting. This led many to lie about their age, and often succeeded. Some boys as young as 13 or 14 went to war. One million volunteers were recruited by the end of 1914, but the British government wanted more. The government wanted as many men as possible to join the forces on their own free will. However in 1916, a law was passed which said men had to join the war whether they wanted to or not. This was called conscription. Those who refused to help the war effort risked being sent to prison (BBC, paragraph 9). In places like America the majority of people wanted to remain neutral.

President Woodrow WIlson even ensured this would happen. However, the opinion of the public started to slowly change after the sinking of the Lusitania which had 128 Americans on board, along with news of the Zimmerman telegram (A&E paragraph 3). When America was officially in the war, many Americans rushed to the recruiting stations and enlisted, but many did not. Eventually the War Department recommended a draft to enlist the numbers needed to fight in a war. Previously, the draft had too many loopholes, allowing rich men to buy substitutes. Also many recent immigrants disliked the idea of forced military service. Even though the public disapproved, all men age 21 to 30 were required to register. As the war progressed the age increased to 45 (Garamone, paragraph 21).

The first World War was one of the most transformative events human history has witnessed. One of the earliest examples of this was the change in women’s jobs. During WWI new roles were assigned to women. They weren’t only working in the home, they were volunteering and working in factories and many other places to contribute to the war efforts. “Frustrated by her inability to become a soldier… she chose the nearest thing: Voluntary Aid Detachment,” (Brophy, page 513). Also, hundreds of thousands of African Americans fought in the war, despite facing prejudice at home and abroad. WWI was the first fully industrialized war, involving deadly weapons like tanks, machine guns, submarines, and aircrafts. Chemical warfare use also grew during WWI. Another way the war transformed the world is the shift in power that occured after the war.

The monarchies of Russia, Germany, and Austria-Hungary had collapsed. The Treaty of Versailles stated that Germany must surrender the, “lost provinces” of Alsace and Lorraine to France and to give up other territories to Denmark and the new state of Poland. Germany’s province of East Prussian was cut off from the rest of its territory and the port of Danzig was put under the control of the League of Nations. The treaty also disarmed German, made them surrender their air force, and reduce its navy to 100,000 volunteers. Lastly Germany would be forced to pay reparations for the war. Close to $33 billion dollars in 1921 (Cole, page 669). The harsh treatment of Germany contributed to the outbreak of another world war 20 years later.

History of the Outbreak of World War II