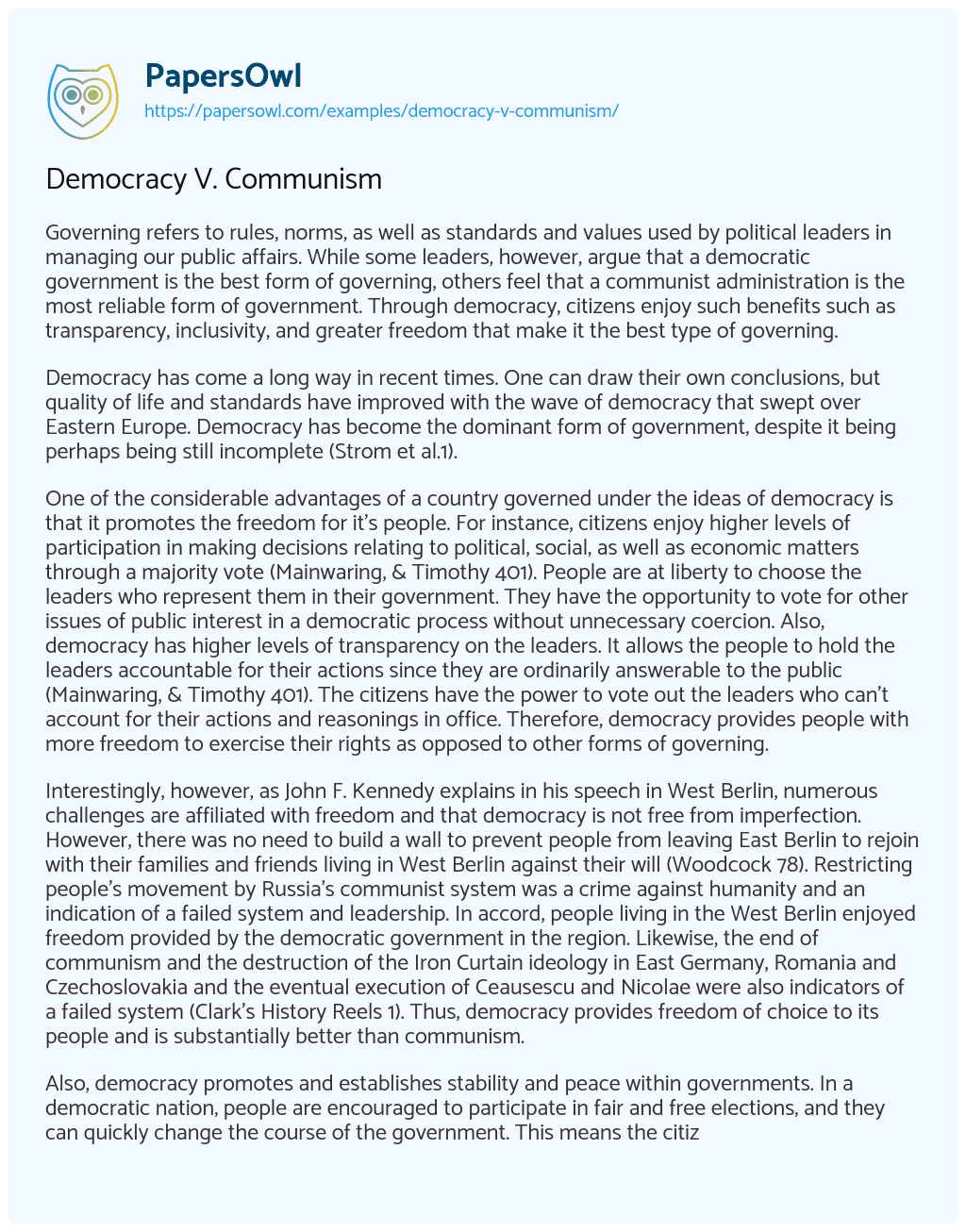 Governing refers to rules, norms, as well as standards and values used by political leaders in managing our public affairs. While some leaders, however, argue that a democratic government is the best form of governing, others feel that a communist administration is the most reliable form of government. Through democracy, citizens enjoy such benefits such as transparency, inclusivity, and greater freedom that make it the best type of governing.

Democracy has come a long way in recent times. One can draw their own conclusions, but quality of life and standards have improved with the wave of democracy that swept over Eastern Europe. Democracy has become the dominant form of government, despite it being perhaps being still incomplete (Strom et al.1).

One of the considerable advantages of a country governed under the ideas of democracy is that it promotes the freedom for it’s people. For instance, citizens enjoy higher levels of participation in making decisions relating to political, social, as well as economic matters through a majority vote (Mainwaring, & Timothy 401). People are at liberty to choose the leaders who represent them in their government. They have the opportunity to vote for other issues of public interest in a democratic process without unnecessary coercion. Also, democracy has higher levels of transparency on the leaders. It allows the people to hold the leaders accountable for their actions since they are ordinarily answerable to the public (Mainwaring, & Timothy 401). The citizens have the power to vote out the leaders who can’t account for their actions and reasonings in office. Therefore, democracy provides people with more freedom to exercise their rights as opposed to other forms of governing.

Interestingly, however, as John F. Kennedy explains in his speech in West Berlin, numerous challenges are affiliated with freedom and that democracy is not free from imperfection. However, there was no need to build a wall to prevent people from leaving East Berlin to rejoin with their families and friends living in West Berlin against their will (Woodcock 78). Restricting people’s movement by Russia’s communist system was a crime against humanity and an indication of a failed system and leadership. In accord, people living in the West Berlin enjoyed freedom provided by the democratic government in the region. Likewise, the end of communism and the destruction of the Iron Curtain ideology in East Germany, Romania and Czechoslovakia and the eventual execution of Ceausescu and Nicolae were also indicators of a failed system (Clark’s History Reels 1). Thus, democracy provides freedom of choice to its people and is substantially better than communism.

Also, democracy promotes and establishes stability and peace within governments. In a democratic nation, people are encouraged to participate in fair and free elections, and they can quickly change the course of the government. This means the citizens do not need to engage in or resort to violence for them to change the current government, as it is in the case with states that exercise dictatorship (Stares n.p). Countries which are democratic, respect and uphold the people’s fundamental human rights. For example, they do not restrict the freedom of its citizens to assemble, have a fair trial, or even freely make a speech. Democracy does not either encourage or tolerate discrimination and exclusion of some of its citizens based on racial, gender and other personal differences (Mainwaring, & Timothy 401). Because of the numerous advantages that arise from democracy, it proves to be the most suitable form of governing. In conclusion, democracy brings a leadership style of approach over communism due to the many benefits that it provides to the people. Democratic governments are typically more stable and peaceful as leaders uphold human rights, promote freedom of speech, and encourage inclusivity. Democracy also improves the transparency and accountability of the democratically elected leaders. Non-democratic leaders across the world should adopt democratic leadership for the people to benefit from the many advantages that it provides even in daily life.