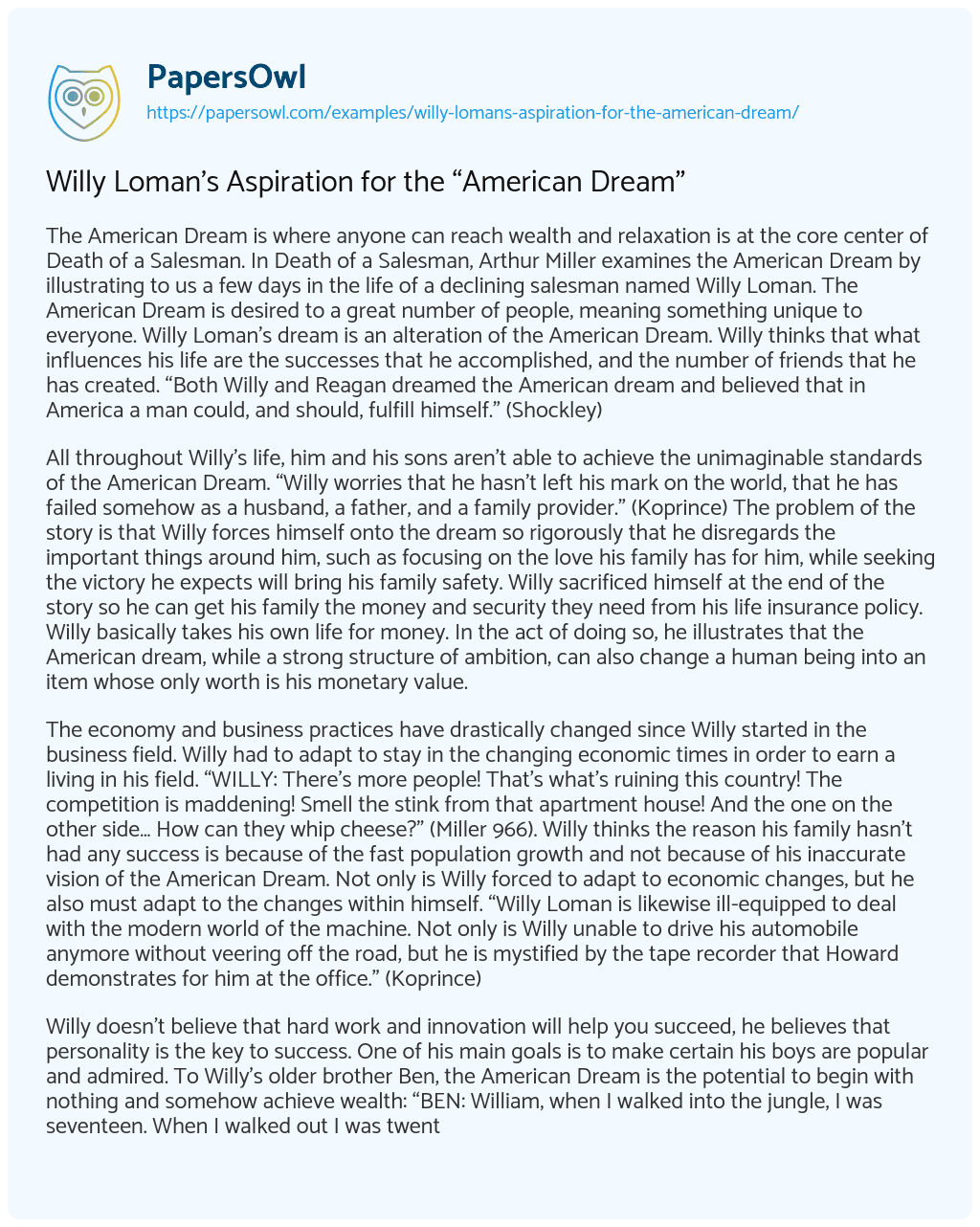 All throughout Willy’s life, him and his sons aren’t able to achieve the unimaginable standards of the American Dream. “Willy worries that he hasn’t left his mark on the world, that he has failed somehow as a husband, a father, and a family provider.” (Koprince) The problem of the story is that Willy forces himself onto the dream so rigorously that he disregards the important things around him, such as focusing on the love his family has for him, while seeking the victory he expects will bring his family safety. Willy sacrificed himself at the end of the story so he can get his family the money and security they need from his life insurance policy. Willy basically takes his own life for money. In the act of doing so, he illustrates that the American dream, while a strong structure of ambition, can also change a human being into an item whose only worth is his monetary value.

The economy and business practices have drastically changed since Willy started in the business field. Willy had to adapt to stay in the changing economic times in order to earn a living in his field. “WILLY: There’s more people! That’s what’s ruining this country! The competition is maddening! Smell the stink from that apartment house! And the one on the other side… How can they whip cheese?” (Miller 966). Willy thinks the reason his family hasn’t had any success is because of the fast population growth and not because of his inaccurate vision of the American Dream. Not only is Willy forced to adapt to economic changes, but he also must adapt to the changes within himself. “Willy Loman is likewise ill-equipped to deal with the modern world of the machine. Not only is Willy unable to drive his automobile anymore without veering off the road, but he is mystified by the tape recorder that Howard demonstrates for him at the office.” (Koprince)

Willy doesn’t believe that hard work and innovation will help you succeed, he believes that personality is the key to success. One of his main goals is to make certain his boys are popular and admired. To Willy’s older brother Ben, the American Dream is the potential to begin with nothing and somehow achieve wealth: “BEN: William, when I walked into the jungle, I was seventeen. When I walked out I was twenty-one. And, by God, I was rich!”. (Miller 987) For the play’s main character, Willy Loman, the American Dream dodges him until the day he dies, having never reached a place of either material success or emotional satisfaction.

The qualities that society focused on and valued in men during that specific historical and cultural time were power, confidence, and achievement; Willy is unable either to cultivate these qualities or pass them on to his two sons in any productive way. The story of Willy Loman shows what happens when the American dream fails to materialize and subsequently dies. The denial by Willy loman leads to suffering of himself and his family internally and externally. Like his brother he could have gone to Africa or Alaska and come back home with riches at one time he had been offered a chance to be a partner in his brother’s firm but he refused and chose the life that he has. This signifies the modern way that the American looks at the dream through savings and hard work to which Willy thought he could be successful in it. Although he has a vehicle and a house, Willy shifts the blame on his failure to succeed on others and himself and denies his role as to why he hasn’t achieved his dream. His lack of fulfillment is as a result of his two sons Happy and Biff who are in there mid 30s but neither seems to have put there life in order. The way his sons are living represents how the American Dream has dissipated for Willy.