What would be Considered a True Hero? 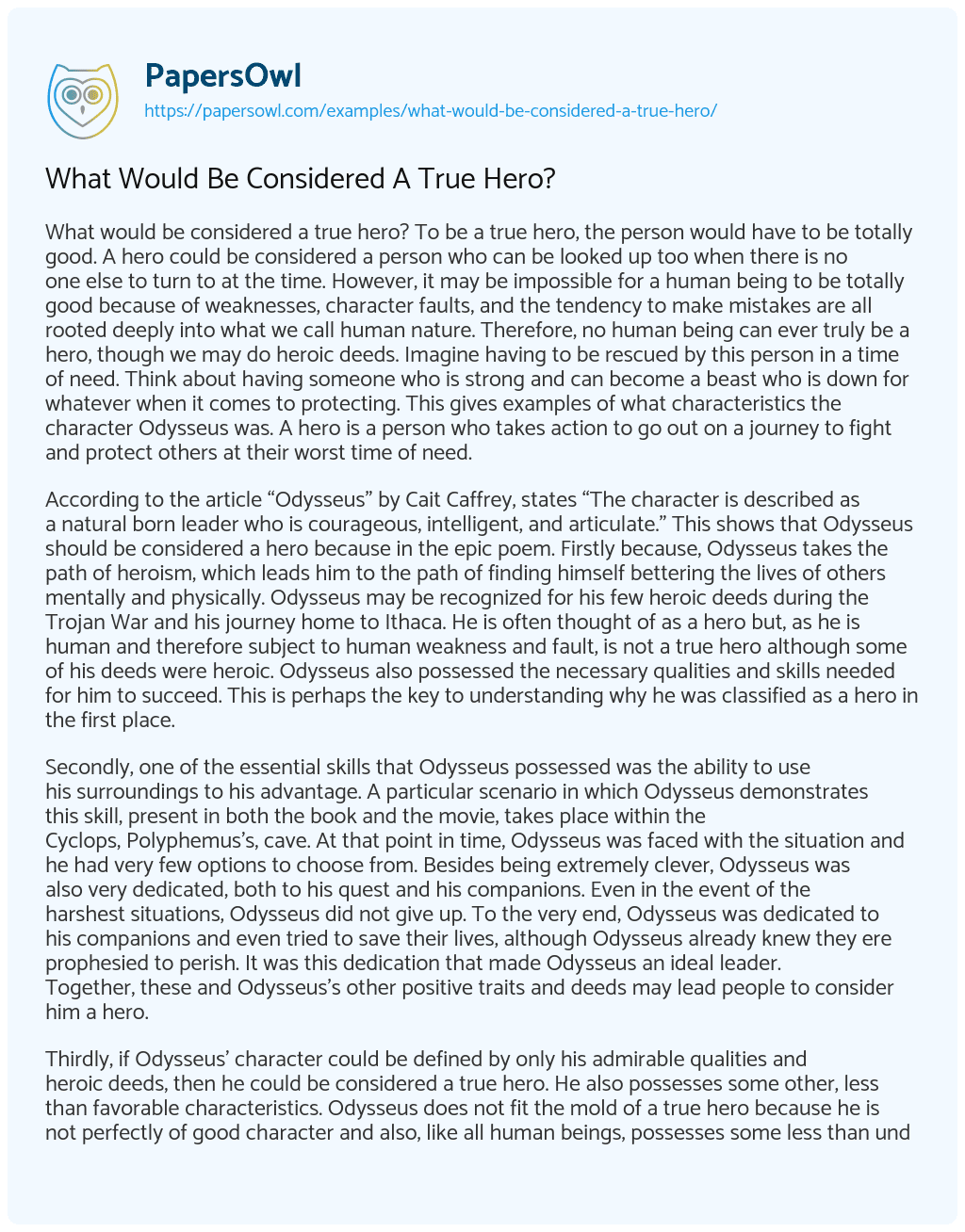 What would be considered a true hero? To be a true hero, the person would have to be totally good. A hero could be considered a person who can be looked up too when there is no one else to turn to at the time. However, it may be impossible for a human being to be totally good because of weaknesses, character faults, and the tendency to make mistakes are all rooted deeply into what we call human nature. Therefore, no human being can ever truly be a hero, though we may do heroic deeds. Imagine having to be rescued by this person in a time of need. Think about having someone who is strong and can become a beast who is down for whatever when it comes to protecting. This gives examples of what characteristics the character Odysseus was. A hero is a person who takes action to go out on a journey to fight and protect others at their worst time of need.

According to the article “Odysseus” by Cait Caffrey, states “The character is described as a natural born leader who is courageous, intelligent, and articulate.” This shows that Odysseus should be considered a hero because in the epic poem. Firstly because, Odysseus takes the path of heroism, which leads him to the path of finding himself bettering the lives of others mentally and physically. Odysseus may be recognized for his few heroic deeds during the Trojan War and his journey home to Ithaca. He is often thought of as a hero but, as he is human and therefore subject to human weakness and fault, is not a true hero although some of his deeds were heroic. Odysseus also possessed the necessary qualities and skills needed for him to succeed. This is perhaps the key to understanding why he was classified as a hero in the first place.

Secondly, one of the essential skills that Odysseus possessed was the ability to use his surroundings to his advantage. A particular scenario in which Odysseus demonstrates this skill, present in both the book and the movie, takes place within the Cyclops, Polyphemus’s, cave. At that point in time, Odysseus was faced with the situation and he had very few options to choose from. Besides being extremely clever, Odysseus was also very dedicated, both to his quest and his companions. Even in the event of the harshest situations, Odysseus did not give up. To the very end, Odysseus was dedicated to his companions and even tried to save their lives, although Odysseus already knew they ere prophesied to perish. It was this dedication that made Odysseus an ideal leader. Together, these and Odysseus’s other positive traits and deeds may lead people to consider him a hero.

Thirdly, if Odysseus’ character could be defined by only his admirable qualities and heroic deeds, then he could be considered a true hero. He also possesses some other, less than favorable characteristics. Odysseus does not fit the mold of a true hero because he is not perfectly of good character and also, like all human beings, possesses some less than undelightful qualities. Undelightful qualities are qualities that are not necessarily those that would associate with the “perfectly good” being. For example, most people probably do not associate the characteristics merciless, reckless, or cruel with your favorite fictional hero. These would be characteristics of a classic villain. Odysseus made a careless mistake when he decided to add an insult to mock the injured Cyclops son of Poseidon, the sea god. This action is a result of Odysseus’ humanity, thus his tendency to be imperfect and in this case petty. Like many things in life there is a darker side to human nature, and by that, I mean beyond pettiness and foolishness. People from all walks of life have been known to lie, to be cruel, to lack even the most fundamentally basic of morals. No matter the origins or background, all humans have morals whether they are bad or good.

He is one being that has a lack of self-control and a tendency towards violence. An example of such behavior originates in a situation in which anybody would be angry, but Odysseus just takes it too far. When the suitors who haveoverrun Odysseus’s home plead with him for mercy, he just glowers at them because although the suitors offered restitution to Odysseus in the forms of material possessions such as land, gold, and treasure, Odysseus denied them and declared that he would be satisfied only with the suitors’ deaths. Here, Odysseus seems to have lost control and surrendered to his anger. Overall, although he has done many good deeds he could never be considered a true hero because of his humanity. So, although Odysseus and the many others like him may never be true heroes, it is because of their humanity that they were worth recognizing in the first place.

What Would Be Considered A True Hero?. (2021, Apr 03). Retrieved from https://papersowl.com/examples/what-would-be-considered-a-true-hero/