Use of Natural Materials 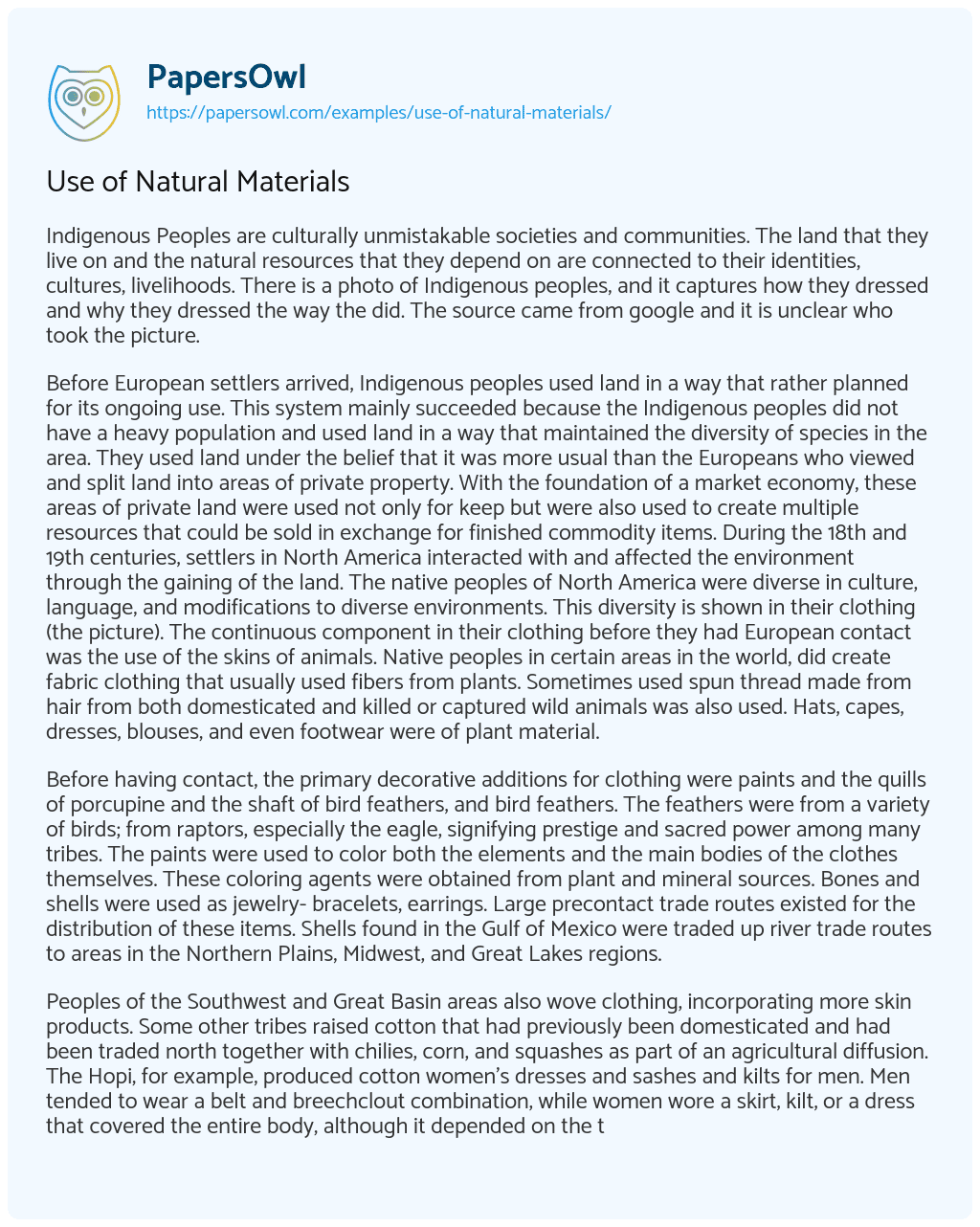 Indigenous Peoples are culturally unmistakable societies and communities. The land that they live on and the natural resources that they depend on are connected to their identities, cultures, livelihoods. There is a photo of Indigenous peoples, and it captures how they dressed and why they dressed the way the did. The source came from google and it is unclear who took the picture.

Before European settlers arrived, Indigenous peoples used land in a way that rather planned for its ongoing use. This system mainly succeeded because the Indigenous peoples did not have a heavy population and used land in a way that maintained the diversity of species in the area. They used land under the belief that it was more usual than the Europeans who viewed and split land into areas of private property. With the foundation of a market economy, these areas of private land were used not only for keep but were also used to create multiple resources that could be sold in exchange for finished commodity items. During the 18th and 19th centuries, settlers in North America interacted with and affected the environment through the gaining of the land. The native peoples of North America were diverse in culture, language, and modifications to diverse environments. This diversity is shown in their clothing (the picture). The continuous component in their clothing before they had European contact was the use of the skins of animals. Native peoples in certain areas in the world, did create fabric clothing that usually used fibers from plants. Sometimes used spun thread made from hair from both domesticated and killed or captured wild animals was also used. Hats, capes, dresses, blouses, and even footwear were of plant material.

Before having contact, the primary decorative additions for clothing were paints and the quills of porcupine and the shaft of bird feathers, and bird feathers. The feathers were from a variety of birds; from raptors, especially the eagle, signifying prestige and sacred power among many tribes. The paints were used to color both the elements and the main bodies of the clothes themselves. These coloring agents were obtained from plant and mineral sources. Bones and shells were used as jewelry- bracelets, earrings. Large precontact trade routes existed for the distribution of these items. Shells found in the Gulf of Mexico were traded up river trade routes to areas in the Northern Plains, Midwest, and Great Lakes regions.

Peoples of the Southwest and Great Basin areas also wove clothing, incorporating more skin products. Some other tribes raised cotton that had previously been domesticated and had been traded north together with chilies, corn, and squashes as part of an agricultural diffusion. The Hopi, for example, produced cotton women’s dresses and sashes and kilts for men. Men tended to wear a belt and breechclout combination, while women wore a skirt, kilt, or a dress that covered the entire body, although it depended on the tribe. Woven rabbit-skin robes were also used. Footwear appropriate to help with a rocky environment. In the north, tribes utilized skin in a way to fight the frigid weather. Seal was used for water resistance and was used for caribou for insulative ability.

Indians in the Eastern Woodlands also decorated their clothing, by using quill and hair. Even the inland tribes could get trade beads and shaped objects made by the coastal tribes from the coverings of shellfish. Deer is one of the largest animal to them and provided the most common skins utilized for clothing. Breechclouts, deer-skin leggings were worn at each end and tucked into a belt, were the norm in male attire, with women generally wearing full dresses. Moccasins in the wooded areas tended to be soft-soled, of tanned deer, moose, or caribou hide, often smoked over a smoldering fire to aid in resisting moisture prior to being cut up for the shoe’s construction.

Native Americans were superstitious of nature and they believe that it was their duty to please their gods. Their clothing has a lot to do with their religion as well. For example, in some tribes’ certain dresses like regalia is restricted only for the priests, and for man, even touching it is forbidden. Masks are used for performing different religious rituals and cultural dances. Some tribes pray to their gods only when they are wearing these masks. It was believed that the gods can be pleased if all the people hide their faces and beg them to forgive them for their sins.

Use of Natural Materials. (2021, Oct 20). Retrieved from https://papersowl.com/examples/use-of-natural-materials/

How Indigenous Peoples Reacted to the Dissolution of Countries

The Impact of Globalization on Indigenous Peoples