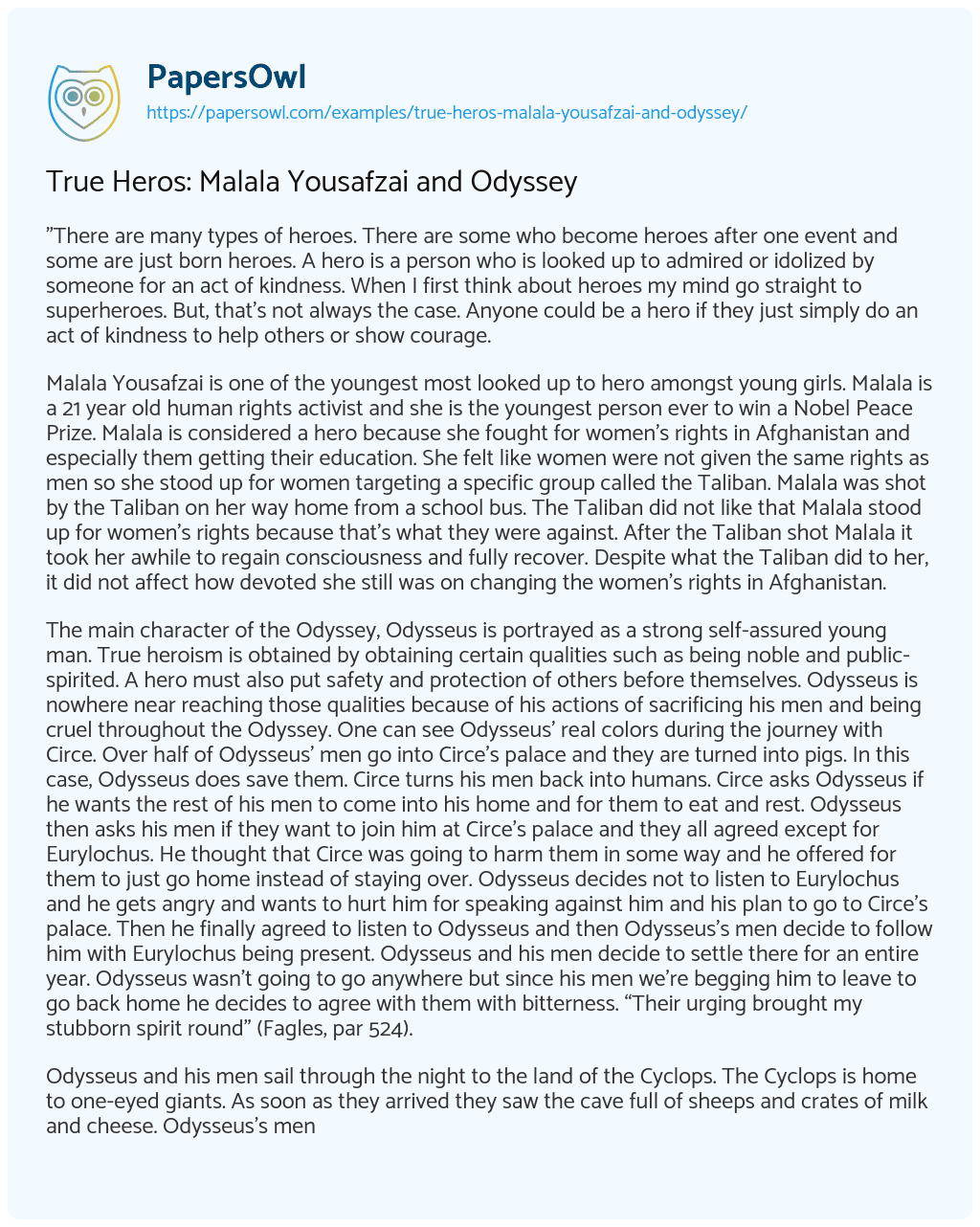 “There are many types of heroes. There are some who become heroes after one event and some are just born heroes. A hero is a person who is looked up to admired or idolized by someone for an act of kindness. When I first think about heroes my mind go straight to superheroes. But, that’s not always the case. Anyone could be a hero if they just simply do an act of kindness to help others or show courage.

Malala Yousafzai is one of the youngest most looked up to hero amongst young girls. Malala is a 21 year old human rights activist and she is the youngest person ever to win a Nobel Peace Prize. Malala is considered a hero because she fought for women’s rights in Afghanistan and especially them getting their education. She felt like women were not given the same rights as men so she stood up for women targeting a specific group called the Taliban. Malala was shot by the Taliban on her way home from a school bus. The Taliban did not like that Malala stood up for women’s rights because that’s what they were against. After the Taliban shot Malala it took her awhile to regain consciousness and fully recover. Despite what the Taliban did to her, it did not affect how devoted she still was on changing the women’s rights in Afghanistan.

The main character of the Odyssey, Odysseus is portrayed as a strong self-assured young man. True heroism is obtained by obtaining certain qualities such as being noble and public-spirited. A hero must also put safety and protection of others before themselves. Odysseus is nowhere near reaching those qualities because of his actions of sacrificing his men and being cruel throughout the Odyssey. One can see Odysseus’ real colors during the journey with Circe. Over half of Odysseus’ men go into Circe’s palace and they are turned into pigs. In this case, Odysseus does save them. Circe turns his men back into humans. Circe asks Odysseus if he wants the rest of his men to come into his home and for them to eat and rest. Odysseus then asks his men if they want to join him at Circe’s palace and they all agreed except for Eurylochus. He thought that Circe was going to harm them in some way and he offered for them to just go home instead of staying over. Odysseus decides not to listen to Eurylochus and he gets angry and wants to hurt him for speaking against him and his plan to go to Circe’s palace. Then he finally agreed to listen to Odysseus and then Odysseus’s men decide to follow him with Eurylochus being present. Odysseus and his men decide to settle there for an entire year. Odysseus wasn’t going to go anywhere but since his men we’re begging him to leave to go back home he decides to agree with them with bitterness. “Their urging brought my stubborn spirit round” (Fagles, par 524).

Odysseus and his men sail through the night to the land of the Cyclops. The Cyclops is home to one-eyed giants. As soon as they arrived they saw the cave full of sheeps and crates of milk and cheese. Odysseus’s men told him that he should grab some of the food and go away, but, he decides to roam around instead. The civilian of the cave then returns; Polyphemus, the son of Poseidon. Polyphemus first tricks Odysseus into being friendly and welcoming. “Give me more, frely, and tell me your name straightway now, so I can give you a guest present to make you happy”(pars.355-356). Polyphemus then decides that he wants to kill two of Odysseus’s men and that he wants to hold Odysseus and the rest of his men in his cave to eat him in the future. Miraculously, Odysseus and the rest of his remaining men escape Polyphemus’s cave and they sail away from the Cyclops. Odysseus then decides that he is not done with his anger towards the Cyclops and that he wants revenge. His men tried to calm him down and make him realize that this is a bad idea but he decides not to listen to them. Odysseus’s stubbornness resulted in Polyphemus throwing boulders at the ship and risking the life of these men that were with Odysseus (Fagles, pars 531-583).”