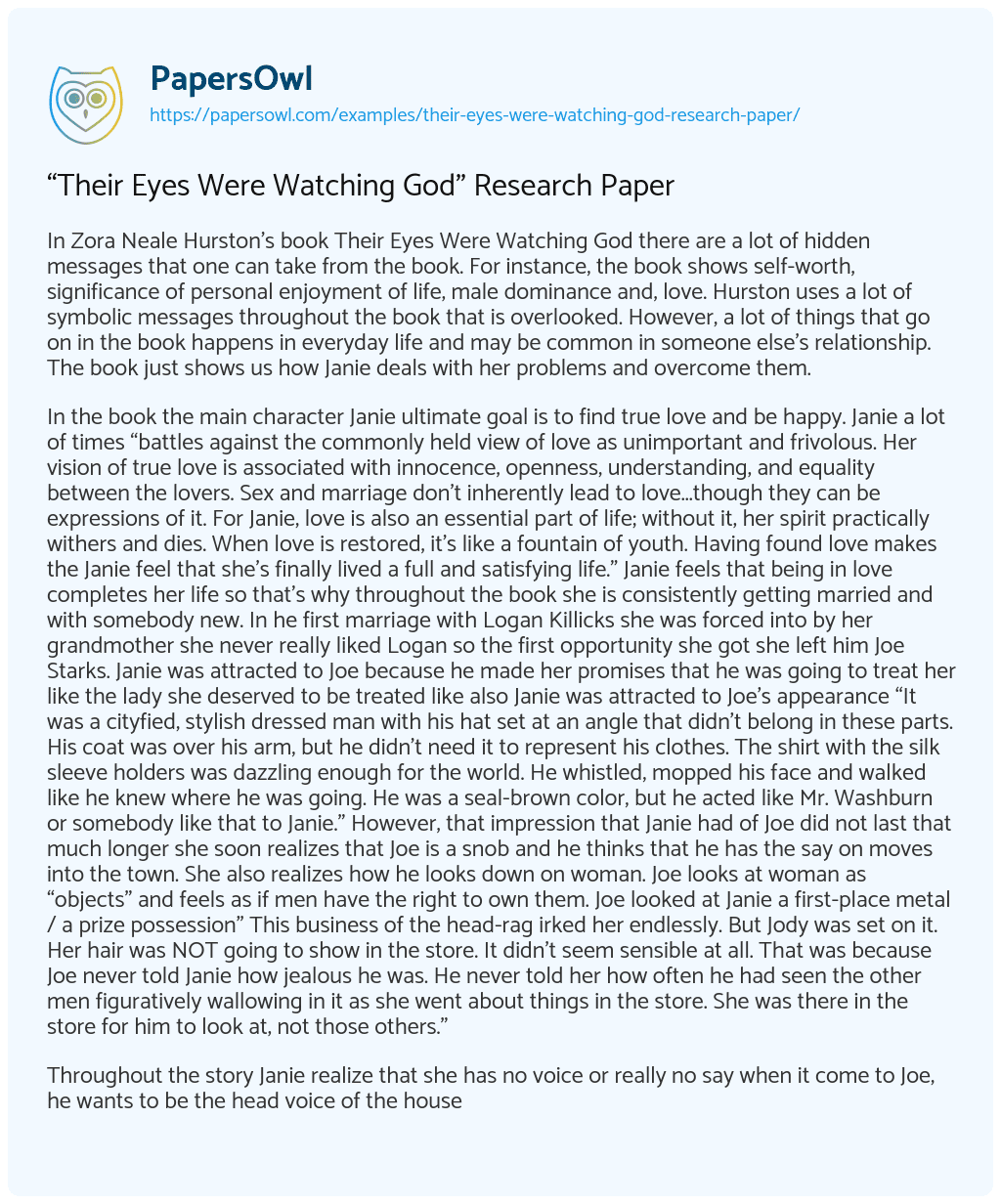 In Zora Neale Hurston’s book Their Eyes Were Watching God there are a lot of hidden messages that one can take from the book. For instance, the book shows self-worth, significance of personal enjoyment of life, male dominance and, love. Hurston uses a lot of symbolic messages throughout the book that is overlooked. However, a lot of things that go on in the book happens in everyday life and may be common in someone else’s relationship. The book just shows us how Janie deals with her problems and overcome them.

In the book the main character Janie ultimate goal is to find true love and be happy. Janie a lot of times “battles against the commonly held view of love as unimportant and frivolous. Her vision of true love is associated with innocence, openness, understanding, and equality between the lovers. Sex and marriage don’t inherently lead to love…though they can be expressions of it. For Janie, love is also an essential part of life; without it, her spirit practically withers and dies. When love is restored, it’s like a fountain of youth. Having found love makes the Janie feel that she’s finally lived a full and satisfying life.” Janie feels that being in love completes her life so that’s why throughout the book she is consistently getting married and with somebody new. In he first marriage with Logan Killicks she was forced into by her grandmother she never really liked Logan so the first opportunity she got she left him Joe Starks. Janie was attracted to Joe because he made her promises that he was going to treat her like the lady she deserved to be treated like also Janie was attracted to Joe’s appearance “It was a cityfied, stylish dressed man with his hat set at an angle that didn’t belong in these parts. His coat was over his arm, but he didn’t need it to represent his clothes. The shirt with the silk sleeve holders was dazzling enough for the world. He whistled, mopped his face and walked like he knew where he was going. He was a seal-brown color, but he acted like Mr. Washburn or somebody like that to Janie.” However, that impression that Janie had of Joe did not last that much longer she soon realizes that Joe is a snob and he thinks that he has the say on moves into the town. She also realizes how he looks down on woman. Joe looks at woman as “objects” and feels as if men have the right to own them. Joe looked at Janie a first-place metal / a prize possession” This business of the head-rag irked her endlessly. But Jody was set on it. Her hair was NOT going to show in the store. It didn’t seem sensible at all. That was because Joe never told Janie how jealous he was. He never told her how often he had seen the other men figuratively wallowing in it as she went about things in the store. She was there in the store for him to look at, not those others.”

Throughout the story Janie realize that she has no voice or really no say when it come to Joe, he wants to be the head voice of the house hold at all times. Eventually Joe body shuts down and while he is laying the hospital bed Janie speaks out and tells him all his wrong doing and crimes but as usual Joe did not want to hear anything Janie had to say, and he ends up dying while cursing Janie out. Last but not least we have Janie last husband Teacake. Teacake and Janie hits it off good he treats her nothing like Joe and she had freedom of speak around Teacake and she loves that. Janie and Teacake ends up getting married one morning Janie woke up and Teacake was missing, and her money was gone. Teacakes comes back late at night and lies to Janie and says that he was using the money to plan a party. Teacakes try’s to win the money back and end up getting stabbed so Teacake and Janie moves to the everglades. Moving to the Everglades for them wasn’t the best idea either, they have a lot of people that tries to come in between their relationship such as Mrs. Turner and Nunkie. Eventually a hurricane hits Teacake gets him and Janie out safely, however Janie almost drowns during the hurricane and Tea Cake gets bitten by a rabid dog trying to save her. Overtime Teacake starts to show signs of rabies. Tea Cake eventually starts to jealous when Janie is out of his sight. One day Tea Cake becomes extremely angry and pulls out a gun on Janie. Janie and Teacake ends up facing off, with guns pointed at one another. The rabies is taking over him and he cannot control it, and Janie shoots him out of self-defense, and he ends up dying.

As you can see Janie love life does not go so well but her marriages did help her. She learns her self-worth throughout the book. In the book there are multiple characters that have their own view and mindset of what a woman should be. From the men that Janie married to the woman in Eatonville that judged Janie when she returned back home, but that didn’t change Janie mindset she walked back into town, with her head high upon her shoulders. She was truly her own person assure of herself and her place in society. Of course, people confronted her with what they thought made her a “proper woman,” Janie did not care she was her own person she was independent and free willed. She overcame the standards and restrictions that was put on the early African American generation.

Janie knew what made her happy even though she thought it was love and being married she soon realized that was not it. In The Natural (1952), Bernard Malamud wrote “We have two lives . . . the life we learn with and the life we live with after that. Suffering is what brings us toward happiness.” In Janie’s situation She has grown physically and mentally, struggled, and suffered. So after all that she has went through she feels like she is a new person. Even though Teacake is gone she still feels that his legacy lives within her because he is part of the new person she has become. She eventually becomes one and unite with nature. Although the forces of the world may be unknowable and at times painful Janie eventually form peace with them.

She starts to realize that death is a way of life and sometimes death is the right thing, so the person does not suffer anymore. Even though she did not want to kill her husband Teacakes she knew he would suffer even more pain staying alive. Janie knew she could help Teacake die in a less painful and a more honorable way. Janie decision was a mixture of self-defense and a peaceful death for Teacake. Janie shooting him shows her maturity it takes a lot to kill the love of your life. An also considering that’s what Janie was working for her whole life to find true love is sad when she has to kill him and be by herself. Even though she still deeply mourned about his death, she does not might be expected blame herself. Instead, Janie later starts extending her energy toward keeping his memory alive and making him happy. She does not blame herself she gets herself together and eventually goes home and tell people her story. In the end she thanks Teacake for giving her the opportunity to love, be herself and adventure new things and taking her far beyond her horizons. Teacake makes, Janie feel like that she has lived a full and satisfying life he also taught her that it is better to have loved and lost than never to have loved at all.

Hurston definitely had a lot of life hidden messages throughout the whole book. Janie literally went from a voiceless teenage girl to a strong woman who has the ability to control her own density and not to let anyone one else do it for her. Overall there are a lot of life lessons that can be taken from the book and applied to real life it was a great book and it definitely deserves a lot more recognition then it gets. It teaches you how to stand up for yourself and also let go of your love ones even when you don’t want to let go because letting go might be the best thing for you and them. Sometimes the littlest things in life makes you happy and it might just be in your backyard (peachtree).