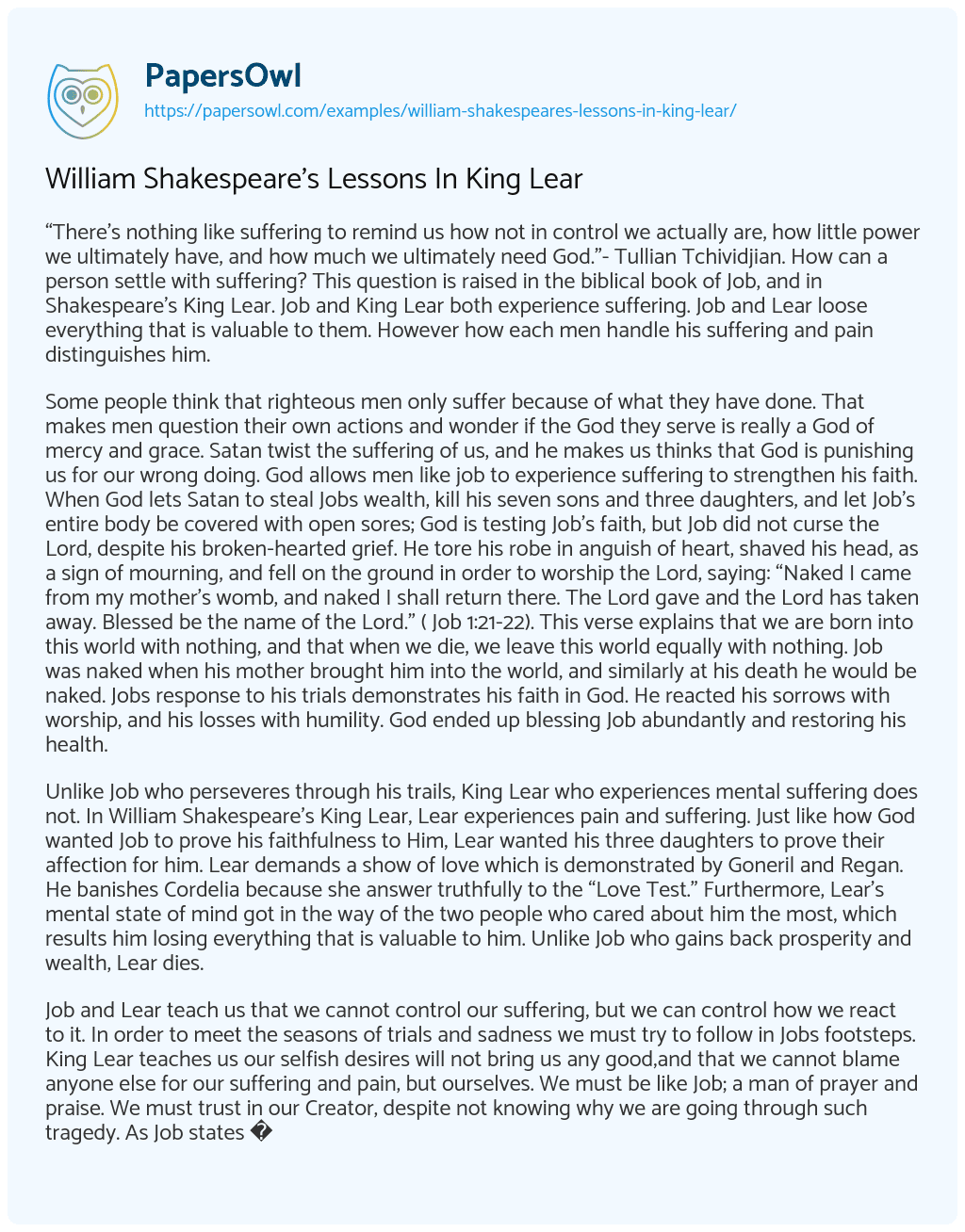 “There’s nothing like suffering to remind us how not in control we actually are, how little power we ultimately have, and how much we ultimately need God.”- Tullian Tchividjian. How can a person settle with suffering? This question is raised in the biblical book of Job, and in Shakespeare’s King Lear. Job and King Lear both experience suffering. Job and Lear loose everything that is valuable to them. However how each men handle his suffering and pain distinguishes him.

Some people think that righteous men only suffer because of what they have done. That makes men question their own actions and wonder if the God they serve is really a God of mercy and grace. Satan twist the suffering of us, and he makes us thinks that God is punishing us for our wrong doing. God allows men like job to experience suffering to strengthen his faith. When God lets Satan to steal Jobs wealth, kill his seven sons and three daughters, and let Job’s entire body be covered with open sores; God is testing Job’s faith, but Job did not curse the Lord, despite his broken-hearted grief. He tore his robe in anguish of heart, shaved his head, as a sign of mourning, and fell on the ground in order to worship the Lord, saying: “Naked I came from my mother’s womb, and naked I shall return there. The Lord gave and the Lord has taken away. Blessed be the name of the Lord.” ( Job 1:21-22). This verse explains that we are born into this world with nothing, and that when we die, we leave this world equally with nothing. Job was naked when his mother brought him into the world, and similarly at his death he would be naked. Jobs response to his trials demonstrates his faith in God. He reacted his sorrows with worship, and his losses with humility. God ended up blessing Job abundantly and restoring his health.

Unlike Job who perseveres through his trails, King Lear who experiences mental suffering does not. In William Shakespeare’s King Lear, Lear experiences pain and suffering. Just like how God wanted Job to prove his faithfulness to Him, Lear wanted his three daughters to prove their affection for him. Lear demands a show of love which is demonstrated by Goneril and Regan. He banishes Cordelia because she answer truthfully to the “Love Test.” Furthermore, Lear’s mental state of mind got in the way of the two people who cared about him the most, which results him losing everything that is valuable to him. Unlike Job who gains back prosperity and wealth, Lear dies.

Job and Lear teach us that we cannot control our suffering, but we can control how we react to it. In order to meet the seasons of trials and sadness we must try to follow in Jobs footsteps. King Lear teaches us our selfish desires will not bring us any good,and that we cannot blame anyone else for our suffering and pain, but ourselves. We must be like Job; a man of prayer and praise. We must trust in our Creator, despite not knowing why we are going through such tragedy. As Job states “ The Lord gives and takes away” Often it is in the “taking away” that our true trust and faithfulness are revealed.

King Lear by William Shakespeare is a Confusing