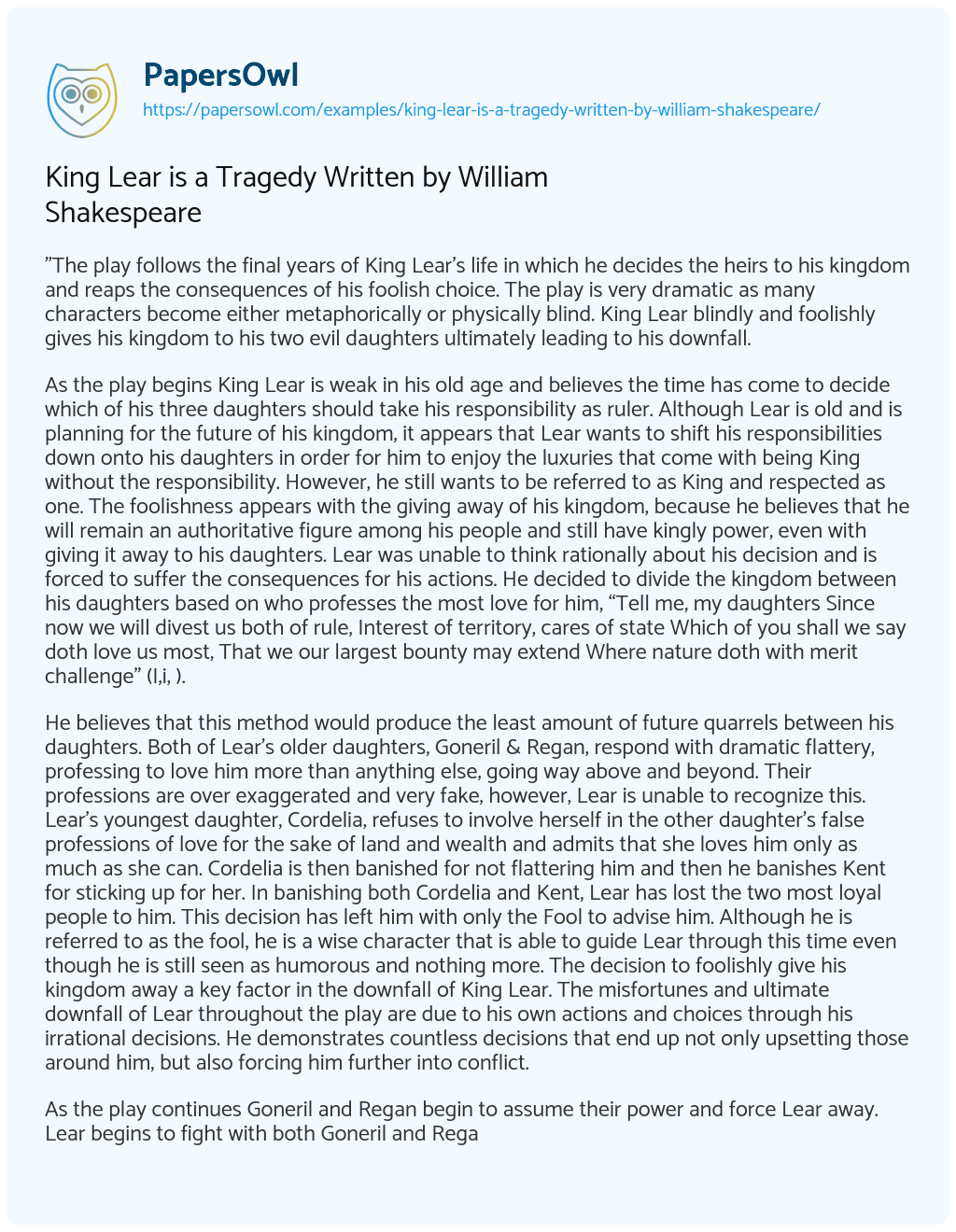 “The play follows the final years of King Lear’s life in which he decides the heirs to his kingdom and reaps the consequences of his foolish choice. The play is very dramatic as many characters become either metaphorically or physically blind. King Lear blindly and foolishly gives his kingdom to his two evil daughters ultimately leading to his downfall.

As the play begins King Lear is weak in his old age and believes the time has come to decide which of his three daughters should take his responsibility as ruler. Although Lear is old and is planning for the future of his kingdom, it appears that Lear wants to shift his responsibilities down onto his daughters in order for him to enjoy the luxuries that come with being King without the responsibility. However, he still wants to be referred to as King and respected as one. The foolishness appears with the giving away of his kingdom, because he believes that he will remain an authoritative figure among his people and still have kingly power, even with giving it away to his daughters. Lear was unable to think rationally about his decision and is forced to suffer the consequences for his actions. He decided to divide the kingdom between his daughters based on who professes the most love for him, “Tell me, my daughters Since now we will divest us both of rule, Interest of territory, cares of state Which of you shall we say doth love us most, That we our largest bounty may extend Where nature doth with merit challenge” (I,i, ).

He believes that this method would produce the least amount of future quarrels between his daughters. Both of Lear’s older daughters, Goneril & Regan, respond with dramatic flattery, professing to love him more than anything else, going way above and beyond. Their professions are over exaggerated and very fake, however, Lear is unable to recognize this. Lear’s youngest daughter, Cordelia, refuses to involve herself in the other daughter’s false professions of love for the sake of land and wealth and admits that she loves him only as much as she can. Cordelia is then banished for not flattering him and then he banishes Kent for sticking up for her. In banishing both Cordelia and Kent, Lear has lost the two most loyal people to him. This decision has left him with only the Fool to advise him. Although he is referred to as the fool, he is a wise character that is able to guide Lear through this time even though he is still seen as humorous and nothing more. The decision to foolishly give his kingdom away a key factor in the downfall of King Lear. The misfortunes and ultimate downfall of Lear throughout the play are due to his own actions and choices through his irrational decisions. He demonstrates countless decisions that end up not only upsetting those around him, but also forcing him further into conflict.

As the play continues Goneril and Regan begin to assume their power and force Lear away. Lear begins to fight with both Goneril and Regan about the issues regarding him staying with them. Both Goneril and Regan begin complaining about the overall rowdiness of him and his knights. They begin to become tired of the atmosphere of the kingdom because of Lear and they decide to tell him that he has to get rid of most of his knights before they allow him to remain in the kingdom. This angers Lear because he is used to being the king, making all of the decisions and hasn’t ever been told what to do. Lear is fed up and refuses to live without his knights and tries to convince the sisters to let him keep the knights giving reasons to why he needs them. He is too proud to give up anything or listen to anybody and this results in him running away in his madness into the raging storm, “”Fifty men dismiss’d? No, rather I abjure all roofs, and choose To wage against the enmity o’ the air;”” (II, iv, ). This is another foolish decision that others see as ‘mad’ and prideful because he would rather curse in the storm than to listen to Goneril and Regan’s requests. As the play progresses and Lear’s misfortune increases, Lear continuously victimizes himself and places the blame on any other force other than himself rather than seeing the mistakes he has made and repenting. In the end all of the sisters die and Lear is left in heartbreak. He is able to see his mistakes in his decisions and the wickedness of Regan and Goneril. In the end King Lear dies while grieving over Cordelia’s dead body. Goneril and Regan played a major role in leading Lear to his demise.

The Tragedy of King Lear is dramatically written play that shows the repercussions that come about from a foolish lifestyle. From the beginning of the novel King Lear’s trust issues were evident as his pride manifest itself through his early on decisions. Lear decided to split the kingdom among his daughter in order to reap the benefits and power of king without the responsibility. King Lear ultimately faced his downfall as a result of his foolish decisions and the wickedness of his daughters.”

King Lear is a Tragedy Written by William Shakespeare. (2021, Apr 19). Retrieved from https://papersowl.com/examples/king-lear-is-a-tragedy-written-by-william-shakespeare/

King Lear by William Shakespeare is a Confusing