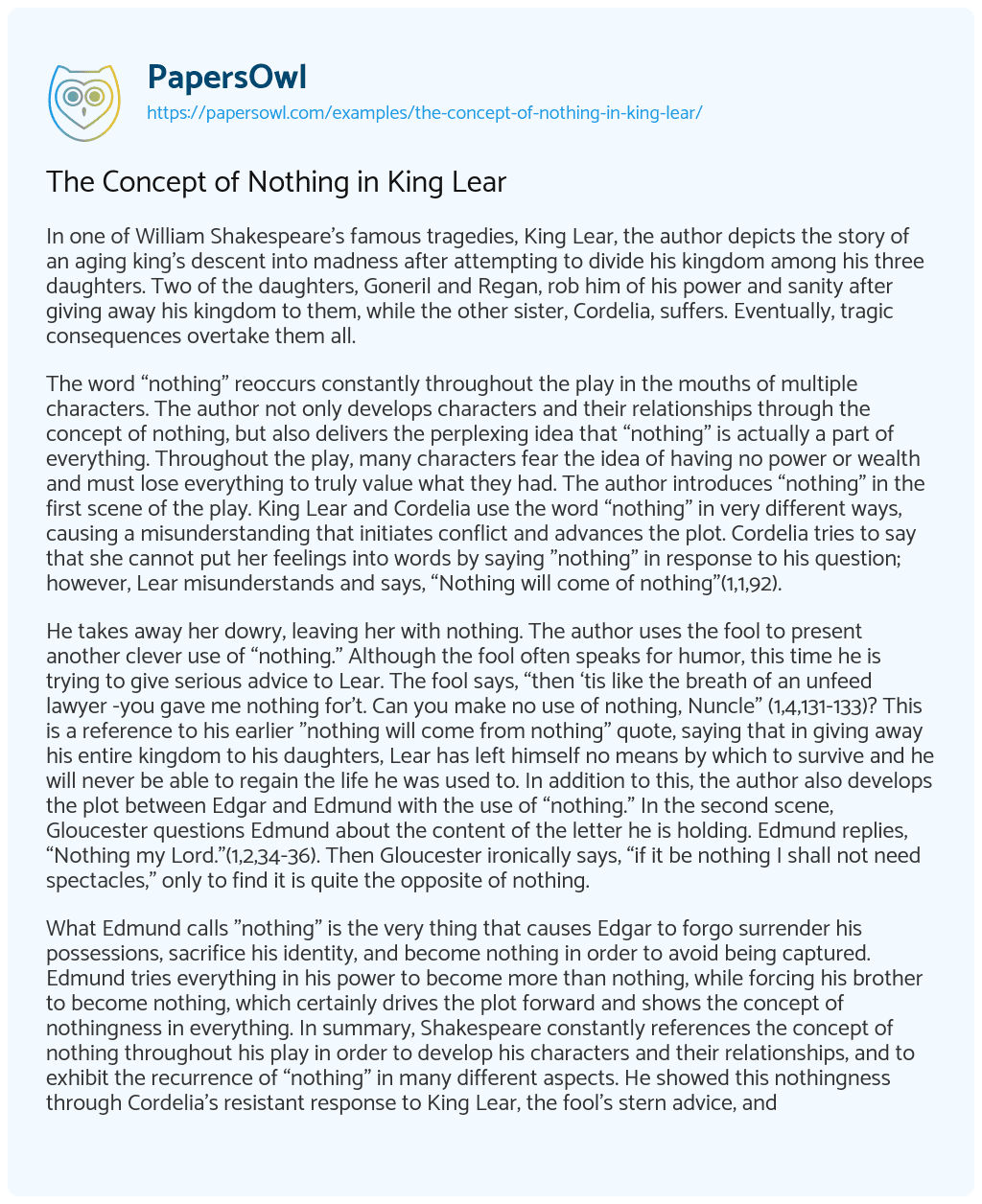 In one of William Shakespeare’s famous tragedies, King Lear, the author depicts the story of an aging king’s descent into madness after attempting to divide his kingdom among his three daughters. Two of the daughters, Goneril and Regan, rob him of his power and sanity after giving away his kingdom to them, while the other sister, Cordelia, suffers. Eventually, tragic consequences overtake them all.

The word “nothing” reoccurs constantly throughout the play in the mouths of multiple characters. The author not only develops characters and their relationships through the concept of nothing, but also delivers the perplexing idea that “nothing” is actually a part of everything. Throughout the play, many characters fear the idea of having no power or wealth and must lose everything to truly value what they had. The author introduces “nothing” in the first scene of the play. King Lear and Cordelia use the word “nothing” in very different ways, causing a misunderstanding that initiates conflict and advances the plot. Cordelia tries to say that she cannot put her feelings into words by saying “nothing” in response to his question; however, Lear misunderstands and says, “Nothing will come of nothing”(1,1,92).

He takes away her dowry, leaving her with nothing. The author uses the fool to present another clever use of “nothing.” Although the fool often speaks for humor, this time he is trying to give serious advice to Lear. The fool says, “then ‘tis like the breath of an unfeed lawyer -you gave me nothing for’t. Can you make no use of nothing, Nuncle” (1,4,131-133)? This is a reference to his earlier “nothing will come from nothing” quote, saying that in giving away his entire kingdom to his daughters, Lear has left himself no means by which to survive and he will never be able to regain the life he was used to. In addition to this, the author also develops the plot between Edgar and Edmund with the use of “nothing.” In the second scene, Gloucester questions Edmund about the content of the letter he is holding. Edmund replies, “Nothing my Lord.”(1,2,34-36). Then Gloucester ironically says, “if it be nothing I shall not need spectacles,” only to find it is quite the opposite of nothing.

What Edmund calls “nothing” is the very thing that causes Edgar to forgo surrender his possessions, sacrifice his identity, and become nothing in order to avoid being captured. Edmund tries everything in his power to become more than nothing, while forcing his brother to become nothing, which certainly drives the plot forward and shows the concept of nothingness in everything. In summary, Shakespeare constantly references the concept of nothing throughout his play in order to develop his characters and their relationships, and to exhibit the recurrence of “nothing” in many different aspects. He showed this nothingness through Cordelia’s resistant response to King Lear, the fool’s stern advice, and the deception between Edmund and Edgar.

The Concept of Nothing in King Lear. (2021, May 10). Retrieved from https://papersowl.com/examples/the-concept-of-nothing-in-king-lear/