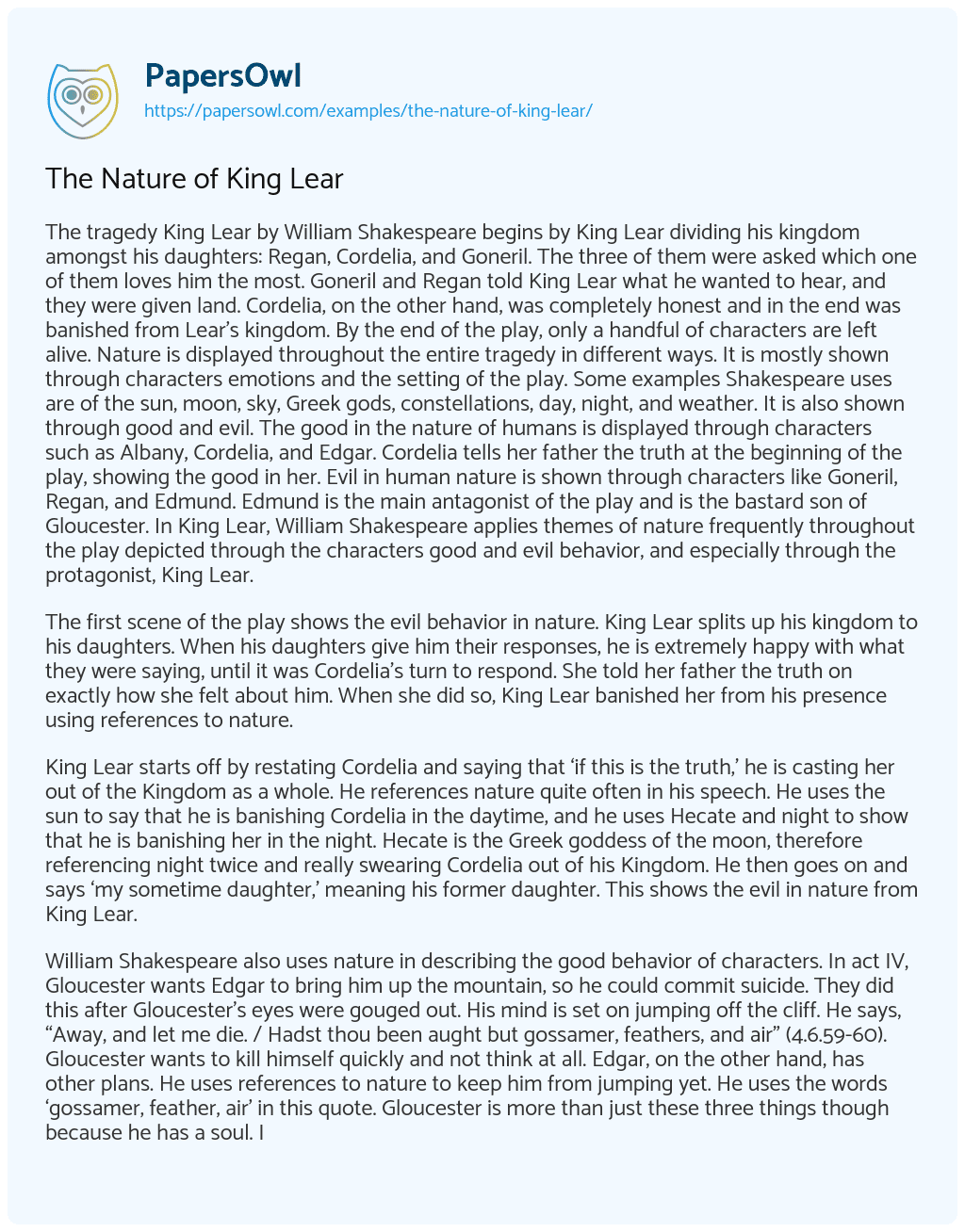 The tragedy King Lear by William Shakespeare begins by King Lear dividing his kingdom amongst his daughters: Regan, Cordelia, and Goneril. The three of them were asked which one of them loves him the most. Goneril and Regan told King Lear what he wanted to hear, and they were given land. Cordelia, on the other hand, was completely honest and in the end was banished from Lear’s kingdom. By the end of the play, only a handful of characters are left alive. Nature is displayed throughout the entire tragedy in different ways. It is mostly shown through characters emotions and the setting of the play. Some examples Shakespeare uses are of the sun, moon, sky, Greek gods, constellations, day, night, and weather. It is also shown through good and evil. The good in the nature of humans is displayed through characters such as Albany, Cordelia, and Edgar. Cordelia tells her father the truth at the beginning of the play, showing the good in her. Evil in human nature is shown through characters like Goneril, Regan, and Edmund. Edmund is the main antagonist of the play and is the bastard son of Gloucester. In King Lear, William Shakespeare applies themes of nature frequently throughout the play depicted through the characters good and evil behavior, and especially through the protagonist, King Lear.

The first scene of the play shows the evil behavior in nature. King Lear splits up his kingdom to his daughters. When his daughters give him their responses, he is extremely happy with what they were saying, until it was Cordelia’s turn to respond. She told her father the truth on exactly how she felt about him. When she did so, King Lear banished her from his presence using references to nature.

King Lear starts off by restating Cordelia and saying that ‘if this is the truth,’ he is casting her out of the Kingdom as a whole. He references nature quite often in his speech. He uses the sun to say that he is banishing Cordelia in the daytime, and he uses Hecate and night to show that he is banishing her in the night. Hecate is the Greek goddess of the moon, therefore referencing night twice and really swearing Cordelia out of his Kingdom. He then goes on and says ‘my sometime daughter,’ meaning his former daughter. This shows the evil in nature from King Lear.

William Shakespeare also uses nature in describing the good behavior of characters. In act IV, Gloucester wants Edgar to bring him up the mountain, so he could commit suicide. They did this after Gloucester’s eyes were gouged out. His mind is set on jumping off the cliff. He says, “Away, and let me die. / Hadst thou been aught but gossamer, feathers, and air” (4.6.59-60). Gloucester wants to kill himself quickly and not think at all. Edgar, on the other hand, has other plans. He uses references to nature to keep him from jumping yet. He uses the words ‘gossamer, feather, air’ in this quote. Gloucester is more than just these three things though because he has a soul. If he were to jump, he would lose more than just his eyes. This scene is a major part of the play because it shows a turning point in Gloucester’s life, and Edgar essentially saves his father’s life. Edgar also uses nature further into the scene to continue to try to save his father’s life.

As Edgar used a fear factor before, now he uses a different point of view. He says Gloucester’s eyes were ‘two full moons.’ This was him describing his eyes before he lost his vision. He goes on and says ‘that the clearest gods who make….’ In this statement, clearest means most noble or powerful, and is saying that the most powerful gods have not taken his life completely yet. He should not give up living his life yet. Nature is used in both good and evil ways throughout the tragedy to show characters behaviors.

Throughout the entire play, King Lear uses references to nature frequently. His most known reference, however, is when he was caught out in the terrible storm. He uses dozens of references to nature to express good and evil behaviors of his. At the beginning of the second scene in act three, King Lear yells out, “Blow, winds, and crack your cheeks! rage! blow! / You cataracts and hurricanoes, spout” (3.2.1-2). King Lear is stuck out in this horrible storm with the Fool and was roaring in rage at the storm. Nature being described through the whole statement and the fact that he repeats blow at the end of his first phrase shows how bad the storm must be. There is also the inference that nature is mad at King Lear for the things he has done. He continues for the next several lines cursing at the storm.

King Lear is still with his Fool out in the storm and now he is complaining about the hunger in his stomach when he says ‘rumble thy bellyful.’ While this is going on, he is still yelling at the storm. King Lear also believes that his daughters have something to do with angering nature when he says ‘I ever gave you kingdom, called you children.’ He repeats all these motifs of nature and there are exclamation marks on the end of every word, showing the significance of the storm and how mad nature is.

In King Lear, William Shakespeare applies themes of nature frequently throughout the play depicted through the characters good and evil behavior, and especially through the protagonist, King Lear. Nature plays such an important role in telling the story of King Lear. In the first scene, references to the sun and the moon show the real anger and evil in King Lear’s voice when he banished Cordelia from his kingdom. Good human nature is represented by characters such as Edgar, Albany, and Cordelia, but especially Edgar. Gloucester and Edgar used motifs of nature like the air, the moon, and gods to have a conversation and save Gloucester from jumping off the mountain and killing himself. Finally, before King Lear entered Gloucester’s castle, he was out in the frightening storm. He used words such as winds, cataracts, rain, and fire to describe his feeling toward the storm and toward his daughters, for he believed that had disrupted nature and created the evil storm. The significance of the storm scene was a change in how King Lear looked at things in life. The connections to nature showed King Lear’s swift change to madness and the change from loving his daughters to being disgusted in them. Shakespeare’s inclusion of motifs of nature helps tremendously to convey the characters feelings in a deeper way so that the reader has the ability to interpret how they believe a character feels.

The Nature of King Lear. (2021, May 03). Retrieved from https://papersowl.com/examples/the-nature-of-king-lear/