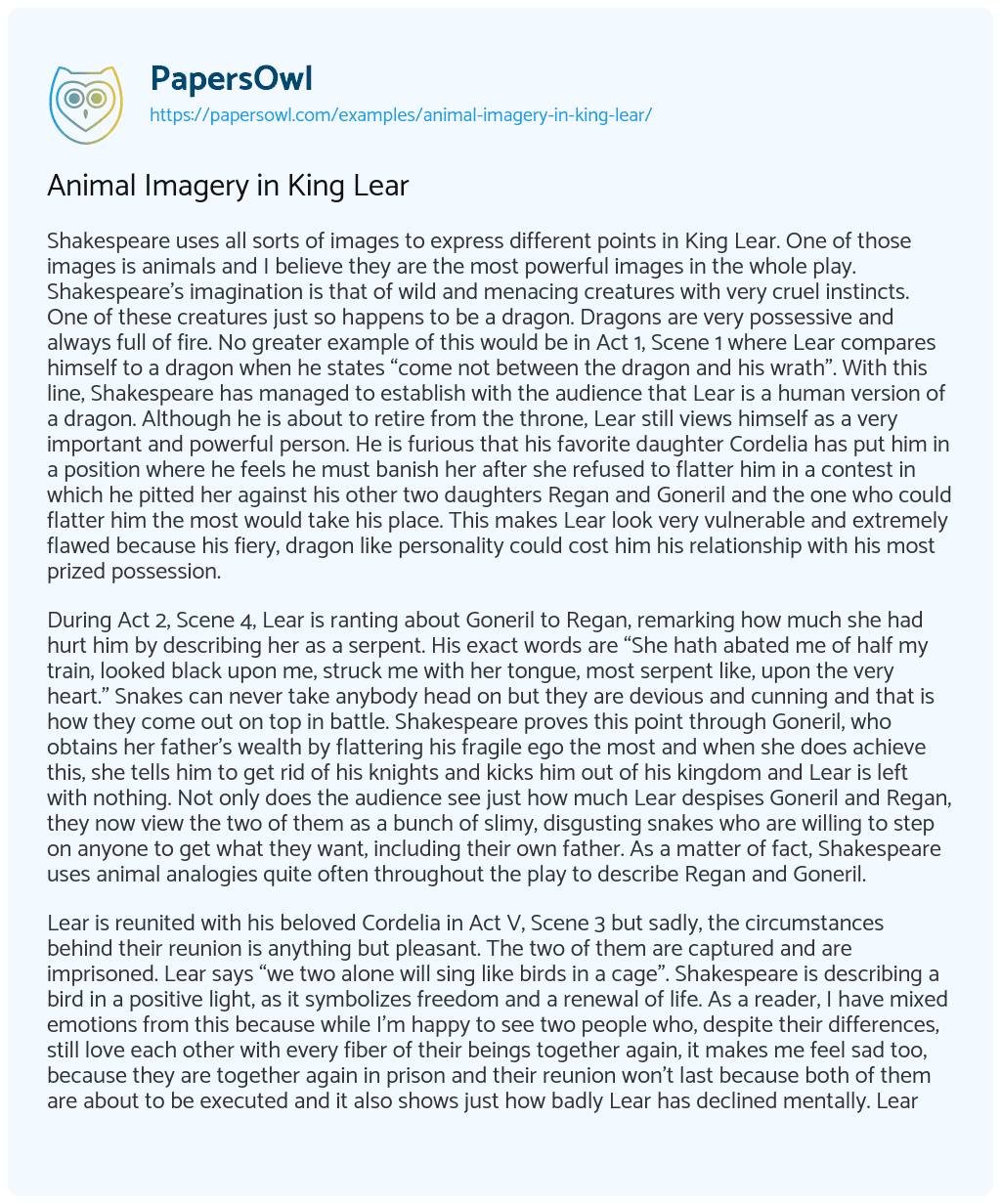 Shakespeare uses all sorts of images to express different points in King Lear. One of those images is animals and I believe they are the most powerful images in the whole play. Shakespeare’s imagination is that of wild and menacing creatures with very cruel instincts. One of these creatures just so happens to be a dragon. Dragons are very possessive and always full of fire. No greater example of this would be in Act 1, Scene 1 where Lear compares himself to a dragon when he states “come not between the dragon and his wrath”. With this line, Shakespeare has managed to establish with the audience that Lear is a human version of a dragon. Although he is about to retire from the throne, Lear still views himself as a very important and powerful person. He is furious that his favorite daughter Cordelia has put him in a position where he feels he must banish her after she refused to flatter him in a contest in which he pitted her against his other two daughters Regan and Goneril and the one who could flatter him the most would take his place. This makes Lear look very vulnerable and extremely flawed because his fiery, dragon like personality could cost him his relationship with his most prized possession.

During Act 2, Scene 4, Lear is ranting about Goneril to Regan, remarking how much she had hurt him by describing her as a serpent. His exact words are “She hath abated me of half my train, looked black upon me, struck me with her tongue, most serpent like, upon the very heart.” Snakes can never take anybody head on but they are devious and cunning and that is how they come out on top in battle. Shakespeare proves this point through Goneril, who obtains her father’s wealth by flattering his fragile ego the most and when she does achieve this, she tells him to get rid of his knights and kicks him out of his kingdom and Lear is left with nothing. Not only does the audience see just how much Lear despises Goneril and Regan, they now view the two of them as a bunch of slimy, disgusting snakes who are willing to step on anyone to get what they want, including their own father. As a matter of fact, Shakespeare uses animal analogies quite often throughout the play to describe Regan and Goneril.

Lear is reunited with his beloved Cordelia in Act V, Scene 3 but sadly, the circumstances behind their reunion is anything but pleasant. The two of them are captured and are imprisoned. Lear says “we two alone will sing like birds in a cage”. Shakespeare is describing a bird in a positive light, as it symbolizes freedom and a renewal of life. As a reader, I have mixed emotions from this because while I’m happy to see two people who, despite their differences, still love each other with every fiber of their beings together again, it makes me feel sad too, because they are together again in prison and their reunion won’t last because both of them are about to be executed and it also shows just how badly Lear has declined mentally. Lear’s quote is also ironic because both he and Cordelia are behind bars just like a bird in its cage. It’s a bittersweet moment in the play overall and it tugs at the audience’s heartstrings.

While Shakespeare uses a bird to represent a new lease on life, he also describes it in a more darker light in Act 1, Scene IV. The fool says to Lear that “The hedge-sparrow fed the cuckoo so long, that it’s had it head bit off by it young.” Through the fool, Shakespeare is describing the image of a bird to show a side of them that paints them as savage predators. The fool knows full well of the treachery that Regan and Goneril have committed. Lear raised the both of them, they know his weaknesses and take full advantage of them. They can see that Lear’s age is catching up to him and that gives them the chance they need to remove him from the throne.

Shakespeare continues his use of evil birds in both Act 1, Scene 4, and Act 3, Scene 4. During an interaction with Goneril’s husband Albany, Lear refers to her as a “detested kite”. Later on, in the play, Lear calls his two hated daughters “pelican daughters”. Like a bunch of vultures, Regan and Goneril have prayed on their dying father and have eaten the flesh right out of his decaying corpse which is exactly what Lear is. Mentally, the king is gone and he is just barely hanging on psychically and both of that makes him easy prey for all the vultures and bloodsuckers around him. The image of birds is the most important animal image in this play because it allows Shakespeare to portray both the good and evil qualities in his characters to his audience.

What I am learning about William Shakespeare is that in his plays, the stakes are always high and the consequences are always huge for the characters involved. He uses so much powerful imagery, but you can argue that the one in regards to animals are the most powerful. He mostly uses animals in a negative light to portray the dark, brutal, and tragic tale that is King Lear. These images give the readers the chance to envision all these horrific and tragic scenes and it really does go a long way in helping them understand this play as a whole. Another thing that makes animal imagery so important is that it shows that humans are not all that different from animals and that they can be just as cruel and unpleasant as the birds and animals that Shakespeare describes and that for this reader and perhaps the audience in general is the most effective piece of text throughout this entire play.