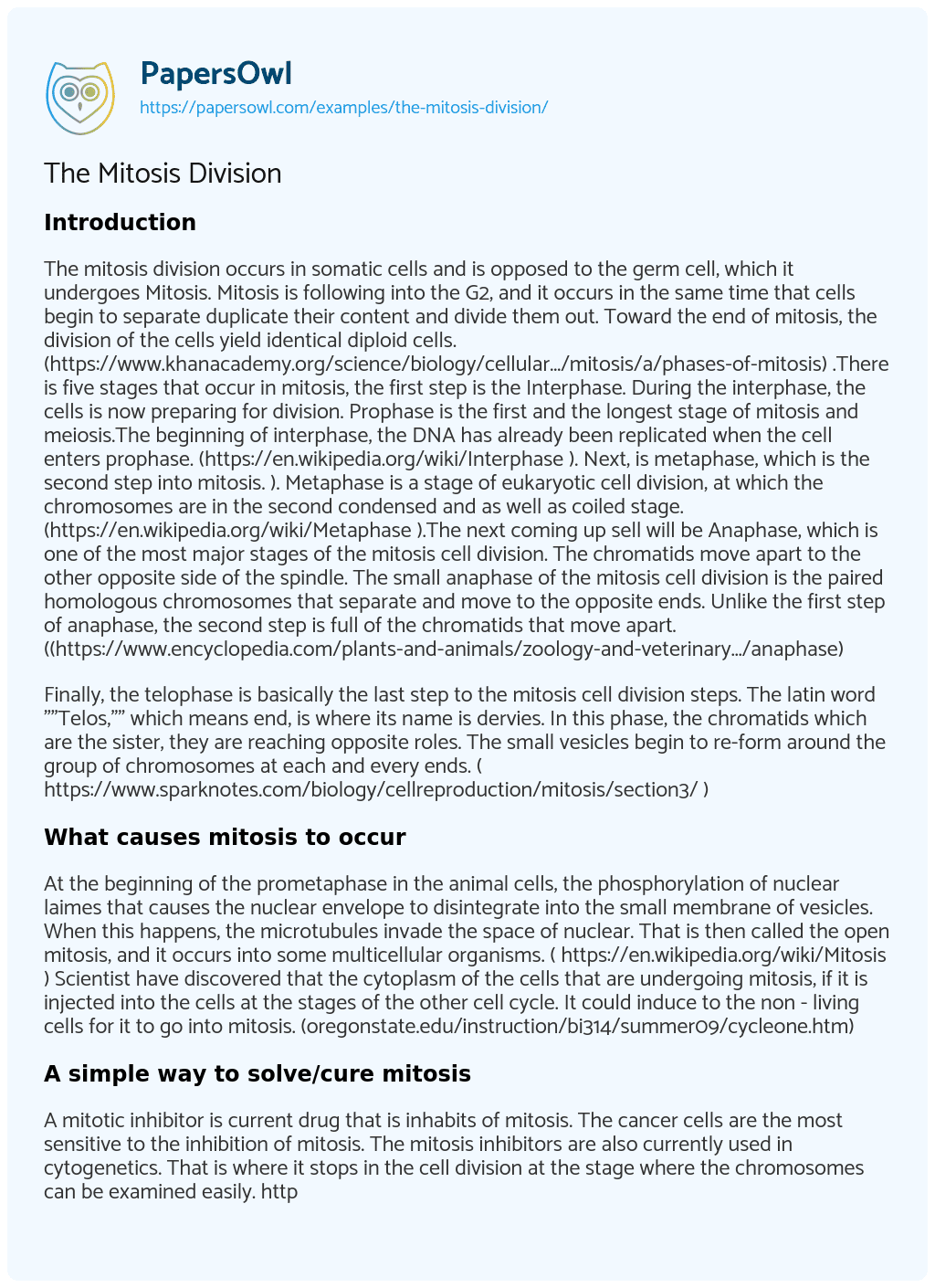 The mitosis division occurs in somatic cells and is opposed to the germ cell, which it undergoes Mitosis. Mitosis is following into the G2, and it occurs in the same time that cells begin to separate duplicate their content and divide them out. Toward the end of mitosis, the division of the cells yield identical diploid cells. (https://www.khanacademy.org/science/biology/cellular…/mitosis/a/phases-of-mitosis) .There is five stages that occur in mitosis, the first step is the Interphase. During the interphase, the cells is now preparing for division. Prophase is the first and the longest stage of mitosis and meiosis.The beginning of interphase, the DNA has already been replicated when the cell enters prophase. (https://en.wikipedia.org/wiki/Interphase ). Next, is metaphase, which is the second step into mitosis. ). Metaphase is a stage of eukaryotic cell division, at which the chromosomes are in the second condensed and as well as coiled stage. (https://en.wikipedia.org/wiki/Metaphase ).The next coming up sell will be Anaphase, which is one of the most major stages of the mitosis cell division. The chromatids move apart to the other opposite side of the spindle. The small anaphase of the mitosis cell division is the paired homologous chromosomes that separate and move to the opposite ends. Unlike the first step of anaphase, the second step is full of the chromatids that move apart. ((https://www.encyclopedia.com/plants-and-animals/zoology-and-veterinary…/anaphase)

Finally, the telophase is basically the last step to the mitosis cell division steps. The latin word “”Telos,”” which means end, is where its name is dervies. In this phase, the chromatids which are the sister, they are reaching opposite roles. The small vesicles begin to re-form around the group of chromosomes at each and every ends. ( https://www.sparknotes.com/biology/cellreproduction/mitosis/section3/ )

What causes mitosis to occur

At the beginning of the prometaphase in the animal cells, the phosphorylation of nuclear laimes that causes the nuclear envelope to disintegrate into the small membrane of vesicles. When this happens, the microtubules invade the space of nuclear. That is then called the open mitosis, and it occurs into some multicellular organisms. ( https://en.wikipedia.org/wiki/Mitosis ) Scientist have discovered that the cytoplasm of the cells that are undergoing mitosis, if it is injected into the cells at the stages of the other cell cycle. It could induce to the non – living cells for it to go into mitosis. (oregonstate.edu/instruction/bi314/summer09/cycleone.htm)

A simple way to solve/cure mitosis

A mitotic inhibitor is current drug that is inhabits of mitosis. The cancer cells are the most sensitive to the inhibition of mitosis. The mitosis inhibitors are also currently used in cytogenetics. That is where it stops in the cell division at the stage where the chromosomes can be examined easily. https://en.wikipedia.org/wiki/Mitotic_inhibitor

The normal mitosis cell division listens to the signal from neighboring cells and they then stop growing when they are encroach on the tissues nearby. Invasiveness-Normal cells. https://www.verywellhealth.com/cancer-cells-vs-normal-cells-2248794

When mitosis is not regulated correctly that is when cancer begins to set up.Cancer is frequently linked to unchecked cell growth.Genes can usually and are more likely to set up chancer by the acceleration of the cell division rates or inhibiting normal controls on the system, known as the cell cycle arrest or programed death to the cell. Tumors then can start occuring by the cancer setting up tumors. https://www.nature.com/scitable/topicpage/cell-division-and-cancer-14046590

Mitosis is controlled by the genes inside of every cell division. Many times this step can go wrong, which when this happens in just a single cell, it replicates itself to make new cells that have been out of control. They are then called cancer cells. https://socratic.org/questions/how-does-mitosis-cause-cancer

What causes cancerous mitosis to occur

Mutations in certain genes cam trigger and cause cancer just by accelerating the cell division or inhibiting normal controls into the system, such as the cell cycle arrest or for the programmed cell death. Cancer mainly contains unchecked cell growth into the cells. When you get up to a big mass of cancer, then, it soon begin to form tumors. https://www.nature.com/scitable/topicpage/cell-division-and-cancer-14046590

Why mitosis and cancerous mitosis division is important

Cell division is important because its the process of one cell that is splitting into two identical copies of one another. Mitosis is the process of the cell division in eukaryotes. It is very important as its the form of reproduction in the single celled organisms, just like amoeba. Mitosis regulates the cell growth, the development, and repairs in multicellular organisms. https://study.com/academy/lesson/why-is-cell-division-important.html. As it’s called conclusion, the cancerous mitosis cell division is unchecked cell growth, in many categories. Sometimes, mitosis can become uncontrolled, and cancer results. The abnormal entities that likely result from the mutations in the current genes that are busy controlling the cell division. The cancer cells do not act in behavior like or resemble the regular cells.