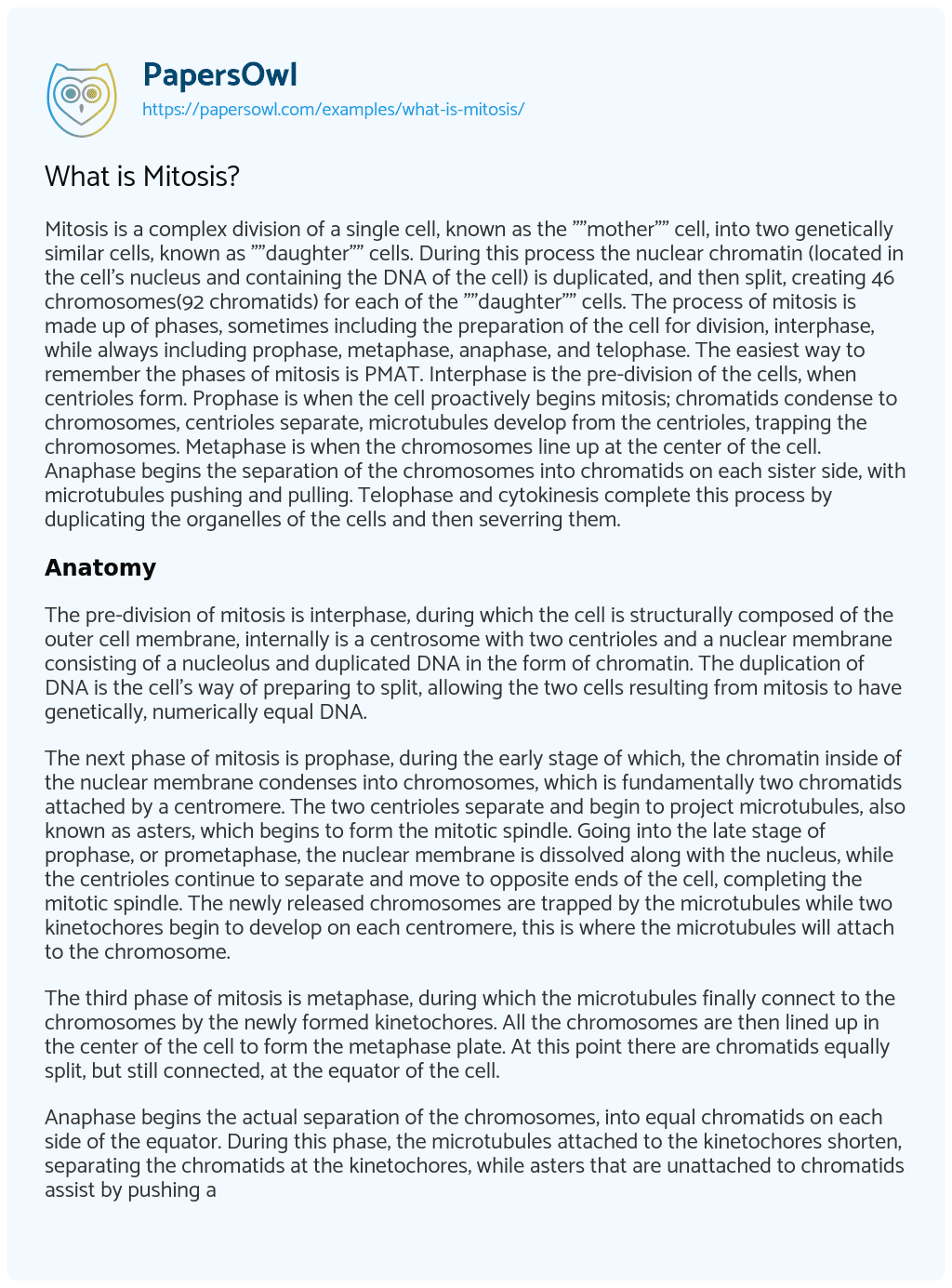 Mitosis is a complex division of a single cell, known as the “”mother”” cell, into two genetically similar cells, known as “”daughter”” cells. During this process the nuclear chromatin (located in the cell’s nucleus and containing the DNA of the cell) is duplicated, and then split, creating 46 chromosomes(92 chromatids) for each of the “”daughter”” cells. The process of mitosis is made up of phases, sometimes including the preparation of the cell for division, interphase, while always including prophase, metaphase, anaphase, and telophase. The easiest way to remember the phases of mitosis is PMAT. Interphase is the pre-division of the cells, when centrioles form. Prophase is when the cell proactively begins mitosis; chromatids condense to chromosomes, centrioles separate, microtubules develop from the centrioles, trapping the chromosomes. Metaphase is when the chromosomes line up at the center of the cell. Anaphase begins the separation of the chromosomes into chromatids on each sister side, with microtubules pushing and pulling. Telophase and cytokinesis complete this process by duplicating the organelles of the cells and then severring them.

The pre-division of mitosis is interphase, during which the cell is structurally composed of the outer cell membrane, internally is a centrosome with two centrioles and a nuclear membrane consisting of a nucleolus and duplicated DNA in the form of chromatin. The duplication of DNA is the cell’s way of preparing to split, allowing the two cells resulting from mitosis to have genetically, numerically equal DNA.

The next phase of mitosis is prophase, during the early stage of which, the chromatin inside of the nuclear membrane condenses into chromosomes, which is fundamentally two chromatids attached by a centromere. The two centrioles separate and begin to project microtubules, also known as asters, which begins to form the mitotic spindle. Going into the late stage of prophase, or prometaphase, the nuclear membrane is dissolved along with the nucleus, while the centrioles continue to separate and move to opposite ends of the cell, completing the mitotic spindle. The newly released chromosomes are trapped by the microtubules while two kinetochores begin to develop on each centromere, this is where the microtubules will attach to the chromosome.

The third phase of mitosis is metaphase, during which the microtubules finally connect to the chromosomes by the newly formed kinetochores. All the chromosomes are then lined up in the center of the cell to form the metaphase plate. At this point there are chromatids equally split, but still connected, at the equator of the cell.

Anaphase begins the actual separation of the chromosomes, into equal chromatids on each side of the equator. During this phase, the microtubules attached to the kinetochores shorten, separating the chromatids at the kinetochores, while asters that are unattached to chromatids assist by pushing apart, therefore elongating the cell and aiding in separation. Anaphase ends with both polar sides of the cell containing equal duplicated chromosomes from the original cell.

The final phase is telophase, during which the duplicated cytoplasm and organelles appear, along with the nuclear membrane and nucleus, the cells should basically mirror each other at the cleavage furrow. Following telophase is cytokinesis, or the division of the newly formed sister cells. The centromere on the chromosomes disappears and the chromosomes return to chromatin. Once the cell is completely divided, mitosis has ended, resulting in two molecularly identical cells.