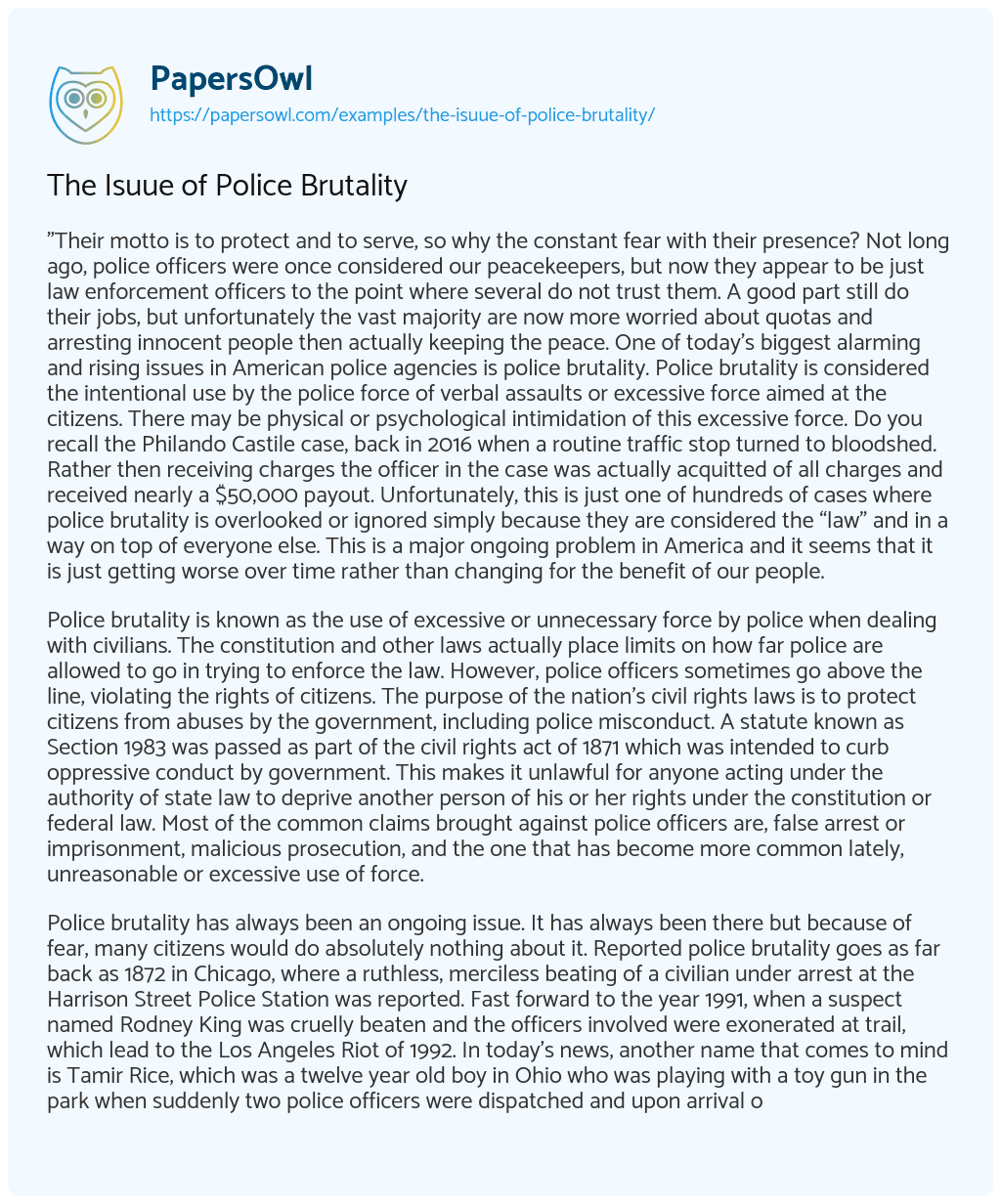 “Their motto is to protect and to serve, so why the constant fear with their presence? Not long ago, police officers were once considered our peacekeepers, but now they appear to be just law enforcement officers to the point where several do not trust them. A good part still do their jobs, but unfortunately the vast majority are now more worried about quotas and arresting innocent people then actually keeping the peace. One of today’s biggest alarming and rising issues in American police agencies is police brutality. Police brutality is considered the intentional use by the police force of verbal assaults or excessive force aimed at the citizens. There may be physical or psychological intimidation of this excessive force. Do you recall the Philando Castile case, back in 2016 when a routine traffic stop turned to bloodshed. Rather then receiving charges the officer in the case was actually acquitted of all charges and received nearly a $50,000 payout. Unfortunately, this is just one of hundreds of cases where police brutality is overlooked or ignored simply because they are considered the “law” and in a way on top of everyone else. This is a major ongoing problem in America and it seems that it is just getting worse over time rather than changing for the benefit of our people.

Police brutality is known as the use of excessive or unnecessary force by police when dealing with civilians. The constitution and other laws actually place limits on how far police are allowed to go in trying to enforce the law. However, police officers sometimes go above the line, violating the rights of citizens. The purpose of the nation’s civil rights laws is to protect citizens from abuses by the government, including police misconduct. A statute known as Section 1983 was passed as part of the civil rights act of 1871 which was intended to curb oppressive conduct by government. This makes it unlawful for anyone acting under the authority of state law to deprive another person of his or her rights under the constitution or federal law. Most of the common claims brought against police officers are, false arrest or imprisonment, malicious prosecution, and the one that has become more common lately, unreasonable or excessive use of force.

Police brutality has always been an ongoing issue. It has always been there but because of fear, many citizens would do absolutely nothing about it. Reported police brutality goes as far back as 1872 in Chicago, where a ruthless, merciless beating of a civilian under arrest at the Harrison Street Police Station was reported. Fast forward to the year 1991, when a suspect named Rodney King was cruelly beaten and the officers involved were exonerated at trail, which lead to the Los Angeles Riot of 1992. In today’s news, another name that comes to mind is Tamir Rice, which was a twelve year old boy in Ohio who was playing with a toy gun in the park when suddenly two police officers were dispatched and upon arrival opened fired on the boy. Not one single question was asked, on why the boy was shot to death. The caller even stated two or three times to the police dispatcher “it’s probably fake”. Furthermore, a huge question remains on why police officers shoot to kill rather than taking other alternatives, such as, aiming at the leg or an arm. The city did not acknowledge fault in this boy’s death and no one was convicted. In 2014, fewer than 1 in 3 people killed by the police were suspected of a violent crime. Police brutality in a way has received more press coverage and a bit more of a topic in the last few years than in the past, but unfortunately, hasn’t correlated to a positive change. As you may know, statistics are specifically hard to track, mainly due to the lack of accountability of police officers. However, the increase in fatal police shootings leads many to believe that in a situation where lesser force might have been more appropriate, police are increasingly inclined to use fatal force. An analysis show that more than 50% of officers admit to ignoring improper conduct from other officers and a shockingly 84% have said they’d personally witnessed fellow officers using “more force than necessary” according to the U.S. Department of Justice. Police officers are indicted in less than 1% of killings, but the indictment rate for citizens is over 90%.

There are many forms of police misconduct and instances of police brutality and they have a variety of causes. Some of the reasons for police brutality include inadequate training, racial profiling, and stress. One of people’s major arguments is that police officers are not properly trained in dealing with different situations. Most agencies due to an economic climate decide to reduce training opportunities for their officers. An officer that is wielding an advance weapon is expected to have proper and correct training otherwise when dealing with people things will more than likely not turn out as expected. Police militarization is becoming a huge issue as well. You see on the news, police officers wearing helmets and masks, carrying assault rifles and riding around in armored vehicles. Federal programs provide excess military equipment along with department-owned purchases, and have given fire power to officers that is often far to advance for what is needed in order to do their jobs, which is protecting their communities. Sending out a poorly trained officer in heavily armed gear to perform normal police duties can dangerously escalate a situation that could have been handled calmly. It has come to light, now more than other years that police officers abuse their power with ethnic minorities such as African Americans, Latinos, etc., this is considered racial profiling. Experts will argue and state that racial profiling is a big cause for police brutality because they are mental shortcuts that associate crime with African Americans and other minorities. Stress can also be considered a factor in the causes for police brutality. The constant risk on the job, the need to adhere to restricting and conflicting regulations, and public perceptions that can all lead an officer to burnout or substance abuse, martial problems, anxiety, depression and ptsd.

In conclusion, in a country devastated by hundreds of deaths and injuries of people, mostly unarmed, at the hands of police officers, drastic changes must be made in our approach for the public safety. Police brutality is an issue that needs to be addressed and taken seriously because it can affect the lives of innocent people. In extension, it will also affect the lives of the police officers that are just trying to do their own jobs. A few “bad apples” or rouge cops damage the police’s good name. Police brutality created a climate of hostility in which communities feel unsafe, threatened, and not protected by their own government. Back then it was unusual when you would see a police car “hiding” in a way that poses threat, almost as if they are hunting rather than patrolling. Why is it that we tense up at the site of a police car? Rather than feeling safe and comfort it is the complete opposite. Why do the hairs on the back of our neck stand up when we see blue lights in our rearview mirror? Why do civilians rethink a hundred times before calling the police? Why is it that when a person is stopped the first thing they automatically do is pull out their camera and begin to record? With this being said, the question still remains, To Protect and Serve or Fear and Harm?”

The Isuue of Police Brutality. (2021, Apr 03). Retrieved from https://papersowl.com/examples/the-isuue-of-police-brutality/

The Impact of Police Brutality