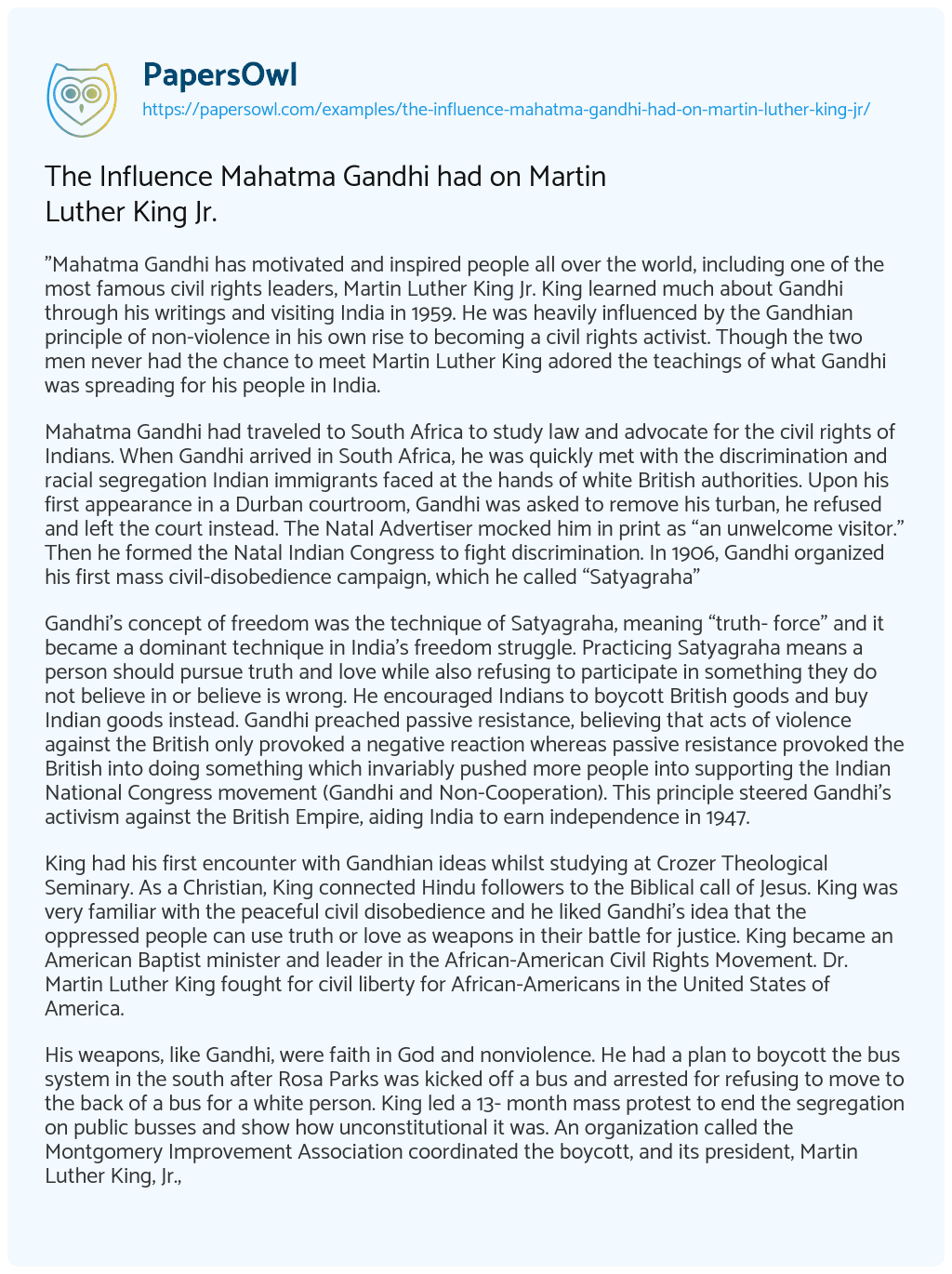 “Mahatma Gandhi has motivated and inspired people all over the world, including one of the most famous civil rights leaders, Martin Luther King Jr. King learned much about Gandhi through his writings and visiting India in 1959. He was heavily influenced by the Gandhian principle of non-violence in his own rise to becoming a civil rights activist. Though the two men never had the chance to meet Martin Luther King adored the teachings of what Gandhi was spreading for his people in India.

Mahatma Gandhi had traveled to South Africa to study law and advocate for the civil rights of Indians. When Gandhi arrived in South Africa, he was quickly met with the discrimination and racial segregation Indian immigrants faced at the hands of white British authorities. Upon his first appearance in a Durban courtroom, Gandhi was asked to remove his turban, he refused and left the court instead. The Natal Advertiser mocked him in print as “an unwelcome visitor.” Then he formed the Natal Indian Congress to fight discrimination. In 1906, Gandhi organized his first mass civil-disobedience campaign, which he called “Satyagraha”

Gandhi’s concept of freedom was the technique of Satyagraha, meaning “truth- force” and it became a dominant technique in India’s freedom struggle. Practicing Satyagraha means a person should pursue truth and love while also refusing to participate in something they do not believe in or believe is wrong. He encouraged Indians to boycott British goods and buy Indian goods instead. Gandhi preached passive resistance, believing that acts of violence against the British only provoked a negative reaction whereas passive resistance provoked the British into doing something which invariably pushed more people into supporting the Indian National Congress movement (Gandhi and Non-Cooperation). This principle steered Gandhi’s activism against the British Empire, aiding India to earn independence in 1947.

King had his first encounter with Gandhian ideas whilst studying at Crozer Theological Seminary. As a Christian, King connected Hindu followers to the Biblical call of Jesus. King was very familiar with the peaceful civil disobedience and he liked Gandhi’s idea that the oppressed people can use truth or love as weapons in their battle for justice. King became an American Baptist minister and leader in the African-American Civil Rights Movement. Dr. Martin Luther King fought for civil liberty for African-Americans in the United States of America.

His weapons, like Gandhi, were faith in God and nonviolence. He had a plan to boycott the bus system in the south after Rosa Parks was kicked off a bus and arrested for refusing to move to the back of a bus for a white person. King led a 13- month mass protest to end the segregation on public busses and show how unconstitutional it was. An organization called the Montgomery Improvement Association coordinated the boycott, and its president, Martin Luther King, Jr., became a noticeable civil rights leader as international attention focused on Montgomery.

The bus boycott demonstrated that the forthcoming for nonviolent mass protest proved to be successful in challenging racial segregation and served as an example for other southern campaigns that followed. In King’s memoir Stride Toward Freedom, he aforementioned the real meaning of the Montgomery bus boycott was to be the root of a growing self-respect to animate the struggle for civil rights, an idea he had adapted from Gandhi. He said, ‘from Gandhi, I learned my operational technique.’ He also stated in the memoir, “Although there may have been political and strategic reasons that Gandhi pursued a non-violent campaign, I believe the ultimate motivation came from his inherit Hindu faith.”

He also became the president of the Southern Christian Leadership Conference (SCLC). With the SCLC he led a struggle against segregation in Albany, Georgia. The Albany movement in October 1961 was intended to end all forms of segregation in the city but in turn, focused on the desegregation of traveling facilities. King and other protestors used mass demonstrations such as jail- ins, sit- ins, boycotts, and hearings. By December 1961, more than 500 protestors from the movement were jailed and African Americans called on King to strengthen the hindered campaign.

King arrived in Albany on December 15, 1961, where he delivered a speech at Shiloh Baptist Church. The next day he joined hundreds of black citizens behind bars on charges of parading without a permit and obstructing the sidewalk. Soon after King was arrested, which gained national attention, and city officials including members of the SCLC had agreed that if King left Albany, then the city would conform the ruling and release the jailed protesters on bail. When King left Albany, the city miscarried to uphold its settlement and protests continued into 1962. After Black power advocates began to reject Kings idea of nonviolence, he grieved that some African Americans had lost all hope and reiterated his own commitment to nonviolence.

In 1963 Martin Luther King Jr led another infamous protest in Birmingham in which activist used boycotts, sit- ins, and marches to protest segregation, unfair hiring practices and other injustices in one of America’s most racially alienated cities. King was arrested for his association on April 12th, where he composed the document known as the “Letter from Birmingham”. Later that year, King worked with numerous civil rights and religious groups to establish the March on Washington for jobs and freedom, a peaceful rally to lean-to the injustices African Americans continued to face.

On August 28th about 200,00 to 300,00 people from all ethnic backgrounds attended the March on Washington becoming the breakpoint in history of American civil rights movement and an influence in the opening of the Civil Rights Act of 1964. It was here where he had delivered his famous speech “I Have a Dream”, a cry for peace and equality that many would consider a masterpiece of oratory. He shared his vision of a future in which all men are created equal while standing on the steps of the Lincoln Memorial. The speech and march paved King’s character at and abroad. Later that year he was named “Man of the Year” by TIME magazine and in 1964 became the youngest person ever to be awarded the Nobel Peace Prize.

Spring of 1965, King grew international attention to the violence that spewed between white segregationists and peaceful demonstrators in Selma, Alabama, where the Student Nonviolent Coordinating Committee organized a voter registration campaign. The brutal scene was captured on television and had outraged many Americans and inspired supporters from all over the country to gather in Alabama and take part in the Selma to Montgomery march led by King. This march was supported by President Lyndon B. Johnson, who had sent federal troops in to keep the peace.

King used his platform to address the issues of the Vietnam War and poverty among Americans of all races. In 1967, King and the SCLC boarded on a program known as the Poor People’s Campaign, which also included a massive march on the capital. He and SCLC planned for groups of 2,00 underprivileged people to appear at Washington, D.C., to meet with government officials to demand jobs, fair minimum wage, and education for poor adults and children to improve their self- esteem. Some thought King’s campaign was too ambitious, and the demands too shapeless.

Unfortunately, King would never see the campaign go through. On the evening of April 4, 1968, Martin Luther King was assassinated. In the wake of his death, an upsurge of riots swept major cities across the country, and President Johnson declared a national day of mourning.

Gandhi and King urged their marchers to strive to achieve emancipating and creative love for all people. Unlike friendship, it makes no difference between worthy and unworthy people, but with the spirit of forgiveness they seek to honor every person as sacred. Gandhi and King declared their commitment to the life of the unknown, their belief in the sacredness of a person and their admiration for the demands of a moral law. They broadcasted that civil disobedience must be practiced in a nonviolent, loving manner and with a concern not only for acquiring systemic changes but also for transforming the mind and heart of the adversary. While both activists had similar beliefs on social and racial injustice, they each had their own unique way of gathering their people to fight against such issues. Martin Luther King Jr. adopted the philosophy of nonviolence and learned it from the teachings of Gandhi. King’s nonviolent campaign and teachings emphasized love in action.”