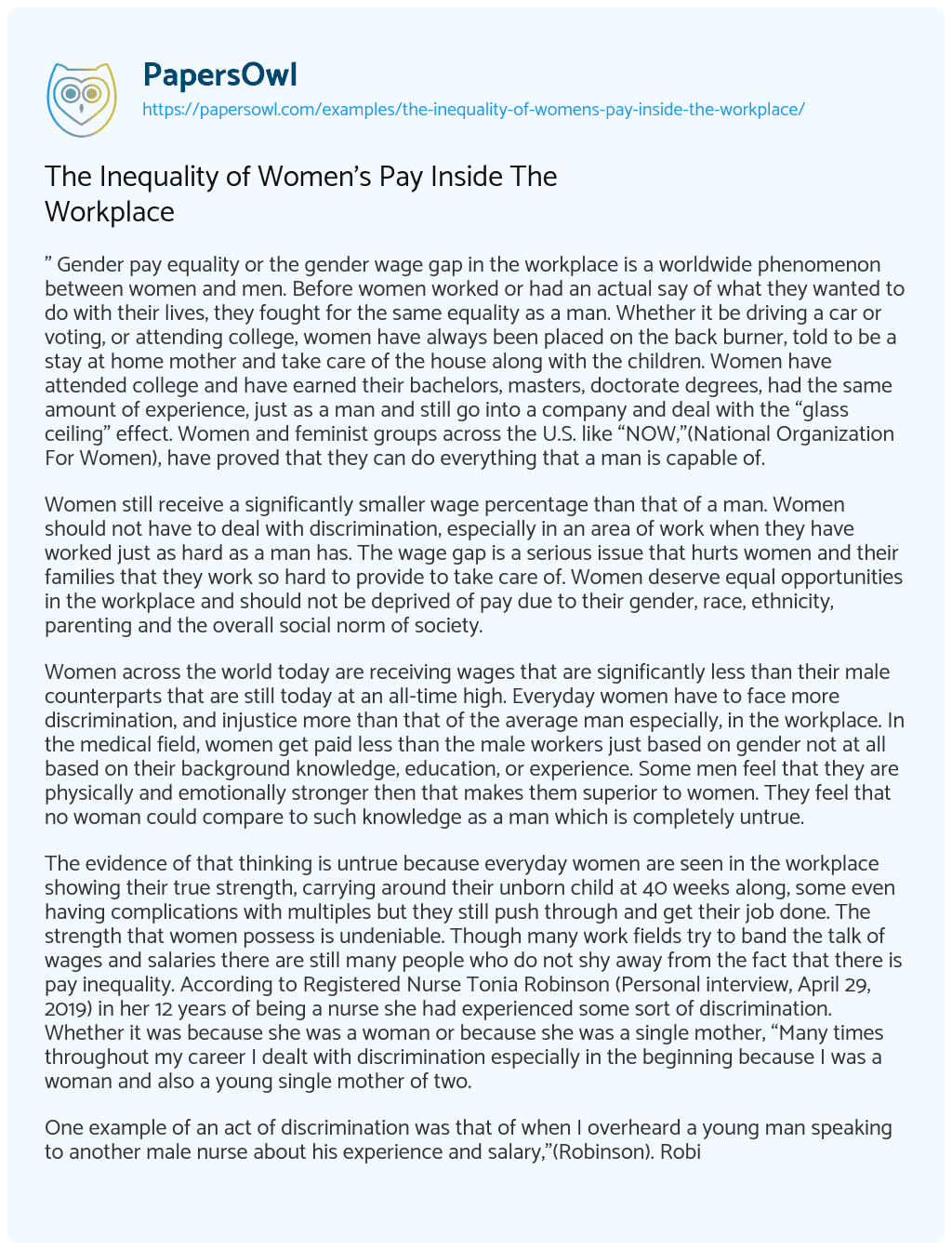 ” Gender pay equality or the gender wage gap in the workplace is a worldwide phenomenon between women and men. Before women worked or had an actual say of what they wanted to do with their lives, they fought for the same equality as a man. Whether it be driving a car or voting, or attending college, women have always been placed on the back burner, told to be a stay at home mother and take care of the house along with the children. Women have attended college and have earned their bachelors, masters, doctorate degrees, had the same amount of experience, just as a man and still go into a company and deal with the “glass ceiling” effect. Women and feminist groups across the U.S. like “NOW,”(National Organization For Women), have proved that they can do everything that a man is capable of.

Women still receive a significantly smaller wage percentage than that of a man. Women should not have to deal with discrimination, especially in an area of work when they have worked just as hard as a man has. The wage gap is a serious issue that hurts women and their families that they work so hard to provide to take care of. Women deserve equal opportunities in the workplace and should not be deprived of pay due to their gender, race, ethnicity, parenting and the overall social norm of society.

Women across the world today are receiving wages that are significantly less than their male counterparts that are still today at an all-time high. Everyday women have to face more discrimination, and injustice more than that of the average man especially, in the workplace. In the medical field, women get paid less than the male workers just based on gender not at all based on their background knowledge, education, or experience. Some men feel that they are physically and emotionally stronger then that makes them superior to women. They feel that no woman could compare to such knowledge as a man which is completely untrue.

The evidence of that thinking is untrue because everyday women are seen in the workplace showing their true strength, carrying around their unborn child at 40 weeks along, some even having complications with multiples but they still push through and get their job done. The strength that women possess is undeniable. Though many work fields try to band the talk of wages and salaries there are still many people who do not shy away from the fact that there is pay inequality. According to Registered Nurse Tonia Robinson (Personal interview, April 29, 2019) in her 12 years of being a nurse she had experienced some sort of discrimination. Whether it was because she was a woman or because she was a single mother, “Many times throughout my career I dealt with discrimination especially in the beginning because I was a woman and also a young single mother of two.

One example of an act of discrimination was that of when I overheard a young man speaking to another male nurse about his experience and salary,”(Robinson). Robinson expressed her feelings on how she upset she was knowing that she had been just a few years more than the young man with nor prior experience other than clinical, with the same Bachelor’s degree yet, he still earned a higher salary than she. Robinson put in a lot of hard work to earn her degree and also her place in the nursing field so, she felt almost as if her degree was a slap in the face not only to herself but to many women who were also in the medical field. AAUW states, “In some occupations, women collectively are receiving billions less than they would with equal pay; for instance, women working as physicians and surgeons are paid $19 billion less annually than if they were paid the same as men in that occupation,” once the salaries are added up annually there is a major pay gap between men and women. In the career field, some occupations feel women who should receive less pay for many different reasons. One reason being a woman’s ethnicity. An ethnic woman gets paid an overall less wage than that of a white man mainly because women either have a hard time speaking English or their employers do not care to learn more about the ethnic culture. In the article “The Gender Wage Gap: 2018 Earnings Differences by Race and Ethnicity,” there are actual ratio’s that show how much more of a percentage men earn than ethnic women: The gender wage gap in weekly earnings for full-time workers in the United States widened between 2017 and 2018. In 2018, the ratio of women’s to men’s median weekly full-time earnings was 81.1 percent, a decrease of 0.7 percent since 2017, when the ratio was 81.8 percent, leaving a wage gap of 18.9 percent, compared with 18.1 percent in 2016.

Women’s median weekly earnings for full-time work were $789 in 2018 compared with $973 for men. Adjusting for inflation, women’s median earnings stayed unchanged compared with the previous year; men’s earnings increased by 0.9 percent since 2017. (?Ariane M.Phil? Hegewisch, 2018) Those numbers are accurate, factual percentages that show how the world is set up, where woman are constantly having to climb a latter working harder to reach what a man has easily handed to him. Companies could easily take the time to find the resources to bring take the time to bring women of different ethnicities to part without cutting them short. The Institute for Women’s policy research gives an insight on just how much ethnic groups get paid much less than men stating that “Women of all major racial and ethnic groups earn less than men of the same group, and also earn less than White men…” Some men feel that if women are so unhappy about men receiving higher pay then they are always welcome to find a new career that fits their needs. The laws that were put in place could be very beneficial if they were acted out but they are very weak and the ratio for the gender pay gap in the state of Louisiana alone is at 69%, national rank is 51st, the lowest within the United States. According to AAUW, “The gender pay gap is the result of many factors, including occupational segregation, bias against working mothers, and direct pay discrimination.

Additionally, such things as racial bias, disability, access to education, and age come into play. Consequently, different groups of women experience very different gaps in pay,” though others would disagree. Studies show that “?46% of American men think the gender pay gap is ‘made up to serve a political purpose,”(Kerri Anne Renzulli). That percentage of men believe that gender wage inequality cannot possibly be a real world problem. The pay gap between men and women is wrong and should be done away with because women work just as hard and are just as educated. There should not be any type of discrimination in the workplace especially discrimination towards a gender. Robinson believes that, “Employers could publicly disclose their wage gaps and then use pay audits to reduce them, as some jobs have, along with being forthcoming about the wages they are willing to pay.” Telling job seekers whether the salary is negotiable and providing a variety of salary/wages ranges is a start in the right direction even if some jobs have not completely gotten on boatd with “The Equal Pay Act.” Pay gaps still remain even after Congress passed The Equal Pay Act Of 1963 and the Lilly Ledbetter Fair Pay Act of 2009. The Lilly Ledbetter Fair Pay Act of 2009 that was effective on January 29, 2009, signed by President Barack Obama states, “bolstered worker protections against pay discrimination,” (www.eeoc.gov).

The act allows individuals who face pay discrimination to seek rectification under federal anti-discrimination laws. To this day many employers do not abide by this law. Both laws were put in place to eliminate any discrimination in the workplace but laws will only take affect if people who the laws pertain to stand up as one, reporting to the upper man about what the see is happening in the workplace. ?Altogether, if the gender pay gap continues and nothing is done to resolve the issue then the economy will continue to decline IWPR states: Persistent pay inequality can have far-reaching economic consequences. According to ?a recent regression analysis? of federal data by IWPR, “?If women were paid the same as comparable men—men who work the same number of hours, are the same age, have the same educational attainment, urban/rural status, and live in the same region of the country—nearly 60 percent of women would see a pay increase, including almost two thirds of single mothers, and women’s poverty rate would be halved, including a decline in poverty for single mothers from 28.9 to 14.5 percent. These raised earnings would correspond to 2.8 percent of 2016 gross domestic product (GDP). (Hegewisch, 2018) That would mean families would not have to depend so much government assistance.

?Not just men should change their views on pay discrimination but also the employers who do all of the https://iwpr.org/publications/impact-equal-pay-poverty-economy/ https://iwpr.org/publications/impact-equal-pay-poverty-economy/ Dumaine 6 hirings. America has a long way to go until they reach the point of complete equality. The government officials make and pass policies and also laws but then do not stay around to see them being reinforced. If the government continues to turn a blind eye, women will always be stuck in a rut unable to progress. Women deserve the same equal opportunities in the workplace as a man no matter the gender or their ethnicity and parental roles.

The Inequality of Women’s Pay Inside The Workplace. (2021, Aug 04). Retrieved from https://papersowl.com/examples/the-inequality-of-womens-pay-inside-the-workplace/