A Social Workers in the United States 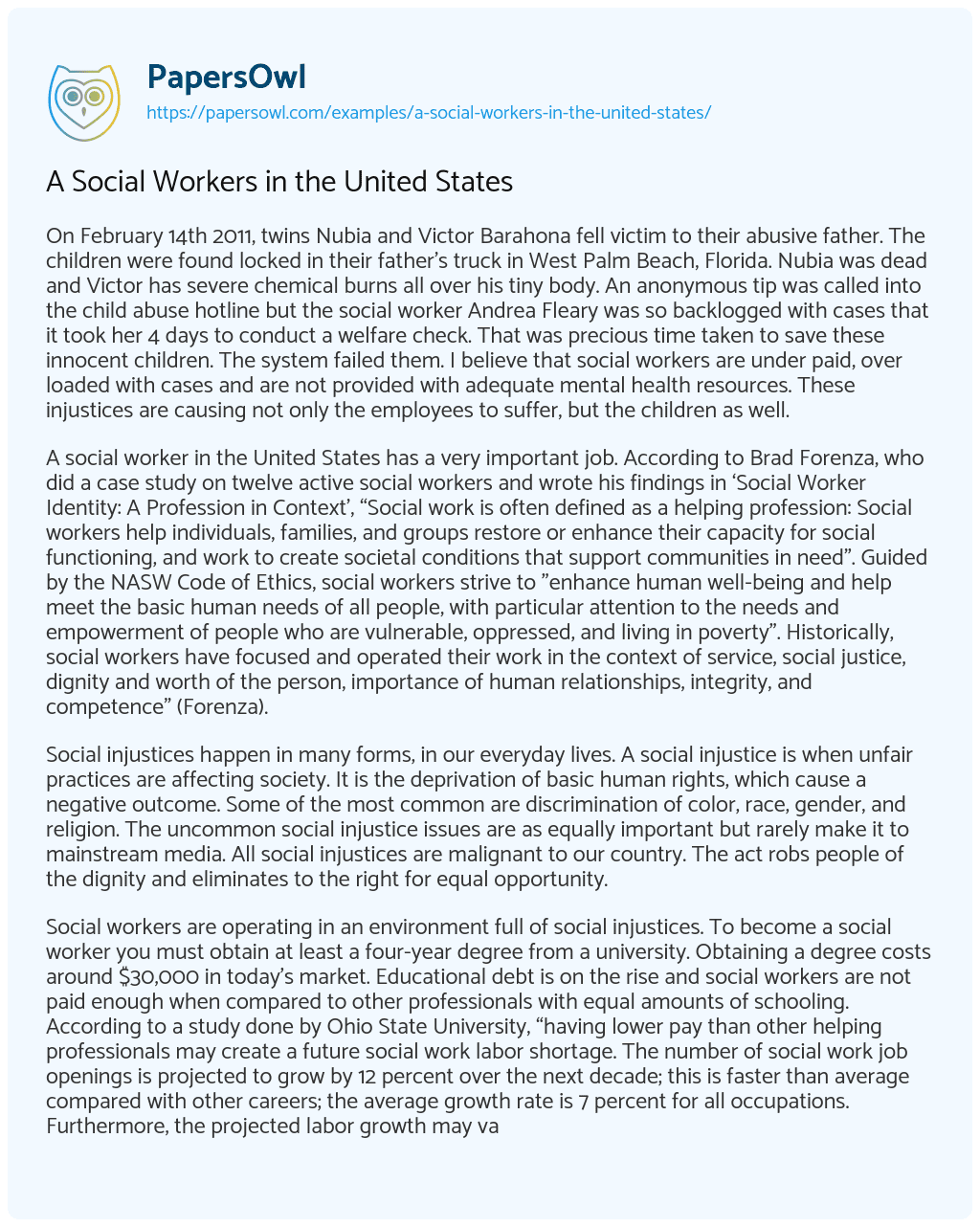 On February 14th 2011, twins Nubia and Victor Barahona fell victim to their abusive father. The children were found locked in their father’s truck in West Palm Beach, Florida. Nubia was dead and Victor has severe chemical burns all over his tiny body. An anonymous tip was called into the child abuse hotline but the social worker Andrea Fleary was so backlogged with cases that it took her 4 days to conduct a welfare check. That was precious time taken to save these innocent children. The system failed them. I believe that social workers are under paid, over loaded with cases and are not provided with adequate mental health resources. These injustices are causing not only the employees to suffer, but the children as well.

A social worker in the United States has a very important job. According to Brad Forenza, who did a case study on twelve active social workers and wrote his findings in ‘Social Worker Identity: A Profession in Context’, “Social work is often defined as a helping profession: Social workers help individuals, families, and groups restore or enhance their capacity for social functioning, and work to create societal conditions that support communities in need”. Guided by the NASW Code of Ethics, social workers strive to “enhance human well-being and help meet the basic human needs of all people, with particular attention to the needs and empowerment of people who are vulnerable, oppressed, and living in poverty”. Historically, social workers have focused and operated their work in the context of service, social justice, dignity and worth of the person, importance of human relationships, integrity, and competence” (Forenza).

Social injustices happen in many forms, in our everyday lives. A social injustice is when unfair practices are affecting society. It is the deprivation of basic human rights, which cause a negative outcome. Some of the most common are discrimination of color, race, gender, and religion. The uncommon social injustice issues are as equally important but rarely make it to mainstream media. All social injustices are malignant to our country. The act robs people of the dignity and eliminates to the right for equal opportunity.

Social workers are operating in an environment full of social injustices. To become a social worker you must obtain at least a four-year degree from a university. Obtaining a degree costs around $30,000 in today’s market. Educational debt is on the rise and social workers are not paid enough when compared to other professionals with equal amounts of schooling. According to a study done by Ohio State University, “having lower pay than other helping professionals may create a future social work labor shortage. The number of social work job openings is projected to grow by 12 percent over the next decade; this is faster than average compared with other careers; the average growth rate is 7 percent for all occupations. Furthermore, the projected labor growth may vary by practice area. Individuals with a heavy burden of student debt may elect to enter social work professions outside of the public sector (for example, child protective services) to earn a sufficient wage to pay their student loans.” So, there is a labor shortage because current social workers seek other employment to better suit their needs. On the other side, students with a heavy debt amount will take on more cases in a desperate attempt to make more money to pay off loans, creating an over worked employee. Experts caution that there is a lack is evidence to support that the allegations that social workers are underpaid, but on the contrary the annual wage growth is a meager .08% while the state minimum wage continues to rise at least .10% yearly. Those statistics speak for themselves. Every year when the state minimum wage rises, the cost of living goes up. We pay more for goods and services to offset the companies paying their employees more of an hourly wage. But social workers, which protect the rights of those without a voice, are not given the same opportunity.

These workers are forced to cut back spending to keep up with rises prices because they are not given an equal wage increase. The Bureau of Labor Statistics reported in 2018 that the average social worker in California makes $43,100 a year or $22 an hour. Making a comfortable living sustainable with that salary while paying back student loans isn’t particularly inviting to newcomers with its not so promising pay, inflexible hours, less than easy case load and high burn out rate. It’s a tough job. Society and the government ignore the fact that these professionals are going into that field with the willingness to eat dinners from vending machines and to be buried in enough paperwork everyday to make their heads explode. According to author Mark Rowe who wrote an article for the magazine Geographical titled “The Gender Gap” in 2017, the United Nations has proposed to eliminate women inequality by 2030. It has been proposed that gender norms need to be reconstructed. The idea of the UN is to put more women in legislature, to go against jobs that have gender norms by putting more men in perceived women’s roles such as nurses to care givers, and creating equal pay. But as Rowe points out, not everyone has the same views. Some argue that it’s not an economic issue and shouldn’t be taken so seriously. “…pointing out the economic benefits that arise from gender equality would appear to be an obvious approach but many voices argue this risks diluting non-negotiable human rights. Dr Torunn Wimpelmann a researcher at the Chr. Michelsen Institute at the University of Bergen, Norway, is sceptical of using economic arguments to persuade those holding conservative social mores to address gender inequality. ‘I’m not a big fan of saying that economic development makes the case for women’s rights,’ she says. ‘This doesn’t have to be justified in economic terms, it should be an objective in its own right. It doesn’t take us anywhere to say [to opponents of women’s rights] “you may not agree with it but it’s important for the economy” (Rowe).

Social workers are constantly in the news for negative reasons. When a child, an elderly patient, and/or someone under the supervision of protective services is injured or killed, the immediate blame falls on the caseworker. It takes compassion and understanding to realize that it’s not always the intentional neglect of the social worker, but that the social worker was spread too thin with responsibility and unable to provide adequate care and attention necessary. The department of Children and Families is open 24/7 and receives around 1000 calls a day to their tip lines in California alone. Those calls all require investigations. One social worker may not be able to handle the volume of work that is being presented in the constricting time frame given. This pressure creates a rushed job and very important red flags to be missed. For example, according to an article published by Fox News in early in 2016, a toddler’s body was found decomposing at an apartment in Detroit. His mother was unable to be located for two weeks, until she was later found to have checked herself into a mental facility after murdering her son. The tragic case lead to charges against two workers from Child Protective Services.

The worker explains that their already tough jobs are constantly made more difficult because of the lack of available resources in Wayne County, such as understaffing and well-publicized problems with the state’s child welfare information system called MiSACWIS. “The system goes down, information is lost, information is placed in other cases,” says the CPS worker. “We are critically understaffed,” the worker adds. “They can hire 40 people in one month and, by the time they get out of training school, it’ll be about three people left.” The worker exaplains that this always leads to a case worker being overloaded with work. “There are people that leave every day and we gain their caseload. So, we can have anywhere from 12 to 25. It depends.” According to the consent decree, CPS workers are not supposed to have more than 13 at any given time.” These case workers did everything in their power to protect this child but because of the lack of authority the child’s life was taken. It becomes a witch hunt and these two case workers were put into jail and charged. The system not only failed the child, but the employees. This young child’s life was taken because these social workers had limited power to remove the child and now their having to defend themselves because of it. It’s an unjust and outrageous circle of a system.

A Social Workers in the United States. (2021, May 14). Retrieved from https://papersowl.com/examples/a-social-workers-in-the-united-states/