The Importance of Characterization in Wall-E, an American Science Fiction Film by Andrew Stanton 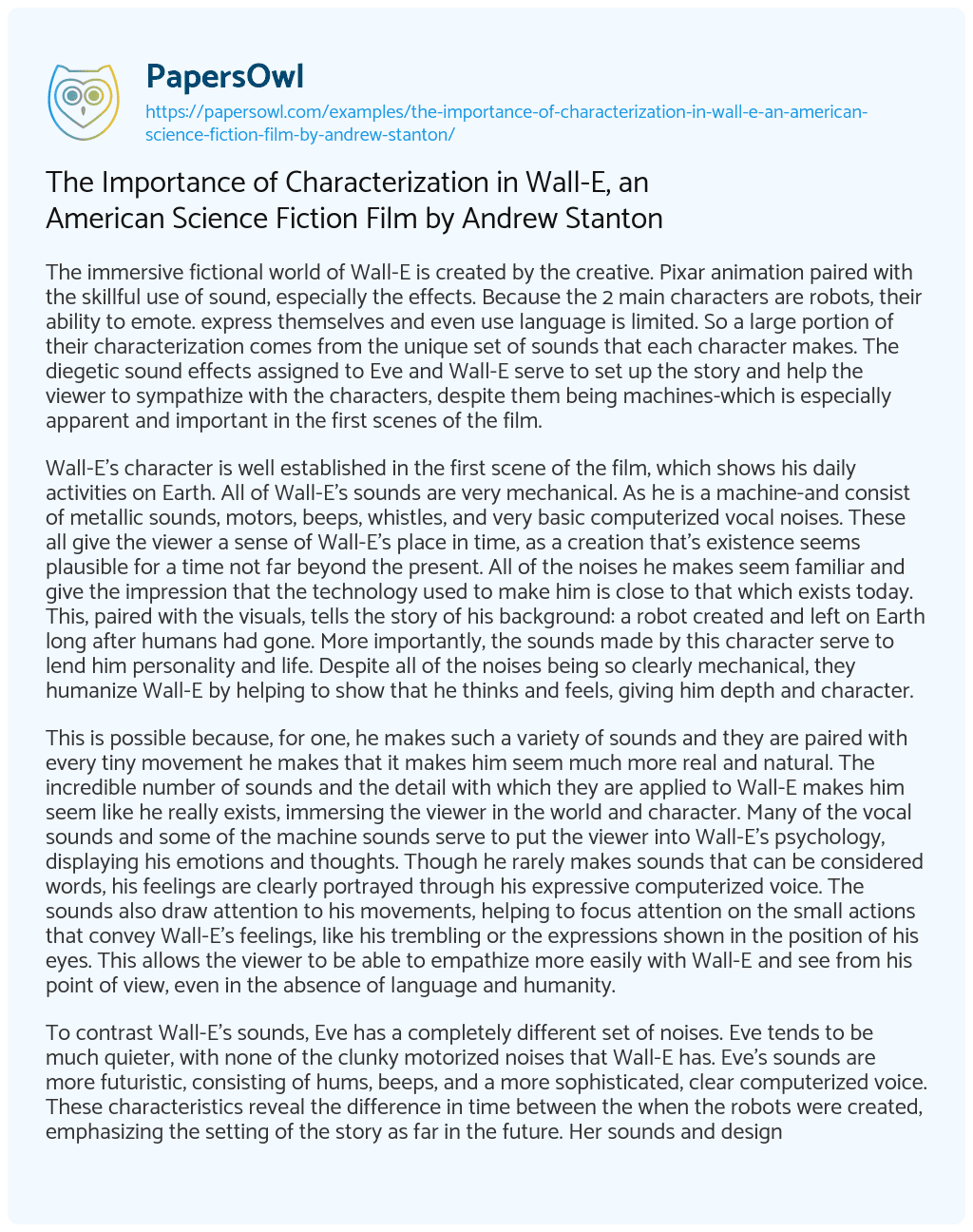 The immersive fictional world of Wall-E is created by the creative. Pixar animation paired with the skillful use of sound, especially the effects. Because the 2 main characters are robots, their ability to emote. express themselves and even use language is limited. So a large portion of their characterization comes from the unique set of sounds that each character makes. The diegetic sound effects assigned to Eve and Wall-E serve to set up the story and help the viewer to sympathize with the characters, despite them being machines-which is especially apparent and important in the first scenes of the film.

Wall-E’s character is well established in the first scene of the film, which shows his daily activities on Earth. All of Wall-E’s sounds are very mechanical. As he is a machine-and consist of metallic sounds, motors, beeps, whistles, and very basic computerized vocal noises. These all give the viewer a sense of Wall-E’s place in time, as a creation that’s existence seems plausible for a time not far beyond the present. All of the noises he makes seem familiar and give the impression that the technology used to make him is close to that which exists today. This, paired with the visuals, tells the story of his background: a robot created and left on Earth long after humans had gone. More importantly, the sounds made by this character serve to lend him personality and life. Despite all of the noises being so clearly mechanical, they humanize Wall-E by helping to show that he thinks and feels, giving him depth and character.

This is possible because, for one, he makes such a variety of sounds and they are paired with every tiny movement he makes that it makes him seem much more real and natural. The incredible number of sounds and the detail with which they are applied to Wall-E makes him seem like he really exists, immersing the viewer in the world and character. Many of the vocal sounds and some of the machine sounds serve to put the viewer into Wall-E’s psychology, displaying his emotions and thoughts. Though he rarely makes sounds that can be considered words, his feelings are clearly portrayed through his expressive computerized voice. The sounds also draw attention to his movements, helping to focus attention on the small actions that convey Wall-E’s feelings, like his trembling or the expressions shown in the position of his eyes. This allows the viewer to be able to empathize more easily with Wall-E and see from his point of view, even in the absence of language and humanity.

To contrast Wall-E’s sounds, Eve has a completely different set of noises. Eve tends to be much quieter, with none of the clunky motorized noises that Wall-E has. Eve’s sounds are more futuristic, consisting of hums, beeps, and a more sophisticated, clear computerized voice. These characteristics reveal the difference in time between the when the robots were created, emphasizing the setting of the story as far in the future. Her sounds and design indicate that she was created closer to the present in the story world, showing how much time has passed since Wall-E’s creation. The humming quietness of her movements is uncommon in machines that exist today, indicating, along with the change in time, that she is a machine with greater importance that was made with better technology in order to achieve her directive.

Eve’s design allows for less minute movement and physical expression, so to compensate for this, she expresses a lot of emotion through sound. Though she doesn’t have as many distinct sounds tied to her movements as Wall-E, Eve expresses much of her emotion through more human ways of making sound. Most notably, Eve can laugh, which lends her a lot of character and emotional depth by giving her a very human way of emoting. She also uses more words than Wall-E and the inflection of her voice to show her feelings. This is shown in the scene in which she is looking for plants with no success and clearly becomes frustrated, making noises like the groans and yells of irritation one might make in a similarly fruitless situation.

Throughout the film, and particularly in the first scenes, Wall-E relies heavily on the sounds specific to Wall-E and Eve to give life and humanity to the robotic characters without really making them human at all.

The Importance of Characterization in Wall-E, an American Science Fiction Film by Andrew Stanton. (2022, Nov 18). Retrieved from https://papersowl.com/examples/the-importance-of-characterization-in-wall-e-an-american-science-fiction-film-by-andrew-stanton/

Ready Player One: a Science-fiction Novel by Ernest Cline

The Underlying Message in the Dystopian Society in Wall-E, a Pixar Movie

Film Adaptation of Everything is Illuminated: Hit or Miss?

The Catholic Church: an Analysis of Film the Godfather and the American Dream